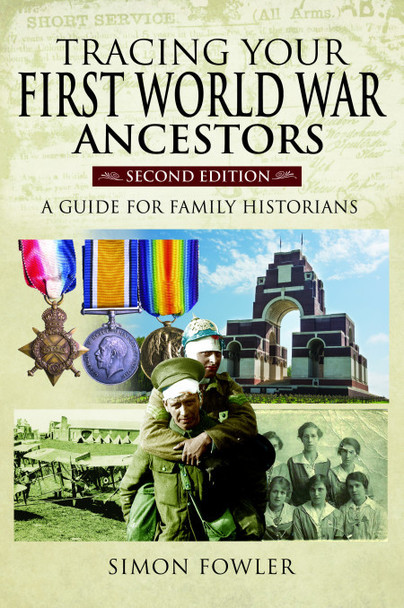 Click here for help on how to download our eBooks
Add to Basket
Add to Wishlist
You'll be £6.98 closer to your next £10.00 credit when you purchase Tracing Your First World War Ancestors - Second Edition. What's this?
Need a currency converter? Check XE.com for live rates

The First World War was perhaps the most traumatic event of the Twentieth Century. Millions of men, women and children were affected by it. And it still has a resonance today more than a hundred years after the Armistice.

This guide offers a simple, yet comprehensive, guide to researching the men and women from Britain - and its dominions and colonies - who took part in the First World War either at the front or at home

It is an accessible, up-to-date and expert introduction to get you on your way and to answer those questions you might come across during your researches.

In a straightforward, easy-to-follow style the book introduces readers to the multitude of sources they can use to explore the history of the First World War for themselves.

In a series of short, instructive chapters the book takes the reader through the process of researching ancestors who served during the First World War providing short cuts and background information as required.

The book covers the key sources, including the National Archives and the many online sites that researchers can turn to. It also covers records of casualties, munitions workers, conscientious objectors and service personnel from the British Dominions.


There are 8 chapters which will help family historians who are trying to research their ancestors who served ‘King and Country’ during the 1914 – 1918 conflict.
Over the years since the War ended the veterans have passed on to a more peaceful stage and we who want to find out about what or where our ancestors were in these turbulent, dreadful years have to rely on digital information or try to experience the battlefield trauma by visiting the various areas of war.
Our ancestors fought on land, at sea or in the air. The author should be able to guide you to the appropriate archives and records. Research can be tricky, sometimes unrewarding but usually we all learn something along the way.
This book is worthy of a place on your bookshelf.

Four years ago I reviewed Simon Fowler's excellent guide Tracing Your Army Ancestors, then in its 3rd edition – so when I saw that a 2nd edition of his Tracing Your First World Ancestors had been published I was keen to take a look.

I wasn't disappointed – the book is crammed with useful information for those whose relatives served in the Army, Royal Navy, Merchant Navy, or Royal Air Force during the Great War. But it doesn't stop there – there's also a chapter entitled Women, Civilians and the Home Front which focuses on the sometimes forgotten contributions that they made, and another which focuses on the dominions: Australia, New Zealand, and Canada.

You won’t find all the answers in this book, but you will get a better understanding of where to look for them – as you would expect from an author who worked for nearly 30 years at the Public Record Office (now The National Archives). Tracing Your First World Ancestors (2nd edition) is a very handy reference book written by someone who knows his topic inside out!

This is a very well done and practical treatise on how to get started doing family research on military service members and how to carry on; which resources are likely to reward the effort and how to make use of uncovered information.

This would make a superlative selection for library acquisition, home use, or as a gift to a history interested friend or relative. Four stars.

I love the Pen and Sword series of publications.This is a updated edition of one I had already purchased several years ago, and have found really interesting and useful while compiling my family tree..
Simon Fowler is the authority when it comes to military history and I would definitely recommend this to anyone who has had a family member in service during the war..

The author does a good job in collating and describing the various sources for researching our ancestors of WW1. Many are obvious but the shortcomings of some resources are well documented and explained. As ever with this type of research, perseverance and continually cross referencing is the key to getting results. Having researched many Canadian, Australian and Newfoundland men I can attest to the outstanding quality and access to their records.