Add to Basket
Add to Wishlist
You'll be £25.00 closer to your next £10.00 credit when you purchase Tudor Victims of the Reformation. What's this?
+£4.50 UK Delivery or free UK delivery if order is over £40
(click here for international delivery rates)

This book describes a selection of people caught up in the turmoil that presaged the reformation - a period of change instigated by a king whose desire for a legitimate son was to brutally sweep aside an entire way of life.

The most famous and influential of the victims were the two people closest to Henry VIII. His mentor, Cardinal Thomas Wolsey, a great churchman and a diplomat of consummate skill. The other was to be the King’s second wife, Anne Boleyn.

These two adversaries, equally determined to succeed, had risen above the usual expectations of their time. Wolsey, of humble birth, became a price of the church, enjoying his position to the full, before coming into conflict with a woman who had no intention of being another passing fancy for the king. She would become the mother of one of the greatest and most famous of England’s monarchs.

They were brought down by the factions surrounding them and the selfish indifference of the man they thought they could trust. Though they succumbed to the forces aligned against them, their courage and achievements are remembered, and their places in history assured.

If you’re at all interested in the Tudor era or even just the reformation, I recommend giving this book a read, as it isn’t too long at under 300 pages and you’ll definitely learn something new from it. I read information in this that I’d never heard of before.

I did enjoy the style of writing, and there were some great phrases which really gave atmosphere to what was being talked about. There is also an extensive bibliography and notes citing the primary sources and explaining their provenance, and this is also discussed throughout the book, which is useful in deciding what to believe.

Those with an interest in this period will find Telford's book a worthwhile addition to the bibliography.

Those of us of a certain age will remember Keith Michel's brilliant portrayal of Henry VIII and the men and women who graced his court. Younger viewers will be familiar with Wolf Hall. The people are the same, and in this wonderful book Lynda Telford, they're brought back to life. Much more information than anything a TV show or a film could give you - this is brilliant! 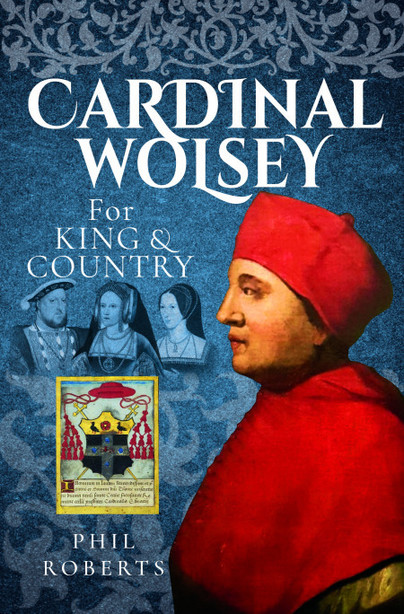 The Wolseys of Suffolk date to Anglo-Saxon times. The earliest notice of a Wolsey as inhabitant of Ipswich is Thomas Wolsey’s father, Robert. He was a successful small businessman and married a Joan Daundy. Thomas was probably born in 1471 in an inn, and was almost certainly baptised in St Mary at the Elms church, Ipswich. Wolsey graduated from university and then his climb to power was extremely fast. He entered the royal household as the chaplain to King Henry VII. When Henry VIII ascended to the throne, Wolsey became his almoner, which gave him access to the king’s council. Henry was very…

Click here to buy both titles for £45.00
More titles by Lynda Telford
Preorder