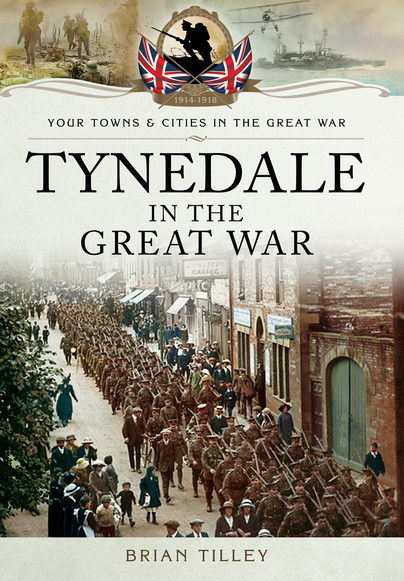 Tynedale in the Great War (Paperback)

Add to Basket
Add to Wishlist
You'll be £12.99 closer to your next £10.00 credit when you purchase Tynedale in the Great War. What's this?
+£4.50 UK Delivery or free UK delivery if order is over £40
(click here for international delivery rates)

The remote moors and valleys around Hexham in Northumberland have been producing fighting men for countless millennia. From repelling invading Romans and Vikings, to locking swords with William Wallace’s rampaging Scots, and the lawless days of the Border Reivers, the men of Tynedale have always rallied to the cause. So when Kitchener’s call went out in 1914, Tynedale’s farmers, estate workers, pitmen and the gentry flocked to the colours in their thousands.

Pitched straight into the front line against battle-hardened German troops just a week after landing in France in 1915, the Tynedale-based Territorials, the 4th Battalion Northumberland Fusiliers, acquitted themselves so well they received a personal commendation from the Allied Commander in Chief, Sir John French. And what of those who were left behind to face the constant threat of the sinister Zeppelins, escaped German prisoners lurking in the heather and the outraged accusations of ‘shirking’ and cowardice?

Extensive and painstaking research into the impact of the conflict on Hexham and the wider Tynedale district, both on the front line and on the home front, has produced this fascinating and absorbing account of a district at war.

Letters back home from the trenches, soldiers’ diaries and reports in the local press paint a vivid picture of what it was like to face the withering fire of German machine guns, the choking clouds of poisonous gas and to suffer the devastating loss of fathers, sons, husbands and sweethearts, as tales of unbelievable heroism and Northumbrian humour abound.

Brian Tilley's latest book contributing to the Your Towns and Cities in the Great War series is very readable and well- researched account of Tynedale at war, covering the effects of the Great War on the area of Northumberland around Hexham. It gives a comprehensive description of the war from the perspective of both the men of Tynedale who volunteered to fight and also those left behind to endure life on the home front. The book has been particularly interesting to review, having visited this part of the country many times over the years and recognising many of the names and places from the author's enthusiastic account

The book shows a great appreciation for Tynedale and its history, together with a fascination for personal stories and ‘local colour’. It will appeal to those with a general interest in the First World War and also local historians with a keen interest in this area of Northumberland. The book contains a wide range of fascinating photographs and well-chosen quotations, which support a lively and interesting text. The book shows an engaging interest in back copies of local newspapers and is clearly written on a subject close to the author’s heart. It is a very worthy addition to the series.

The reader is taken into this world through personal letters and diaries which conjure up a strong sense of everyday life in the time in which they were written over 100 years ago. It feels a privilege to read them.

Another of Pen and Sword's brilliant series on the towns and cities of Britain as they slowly became involved in the serious business of the Great War. Packed with fantastic information and superb photos.

'Extensive research into the impact of the conflict on Hexham and the wider Tyndale district, both on the front line and on the home front, has produced this fascinating and absorbing account of a district at war.'

'… a unique record of how the district was affected by the War to End Wars...'