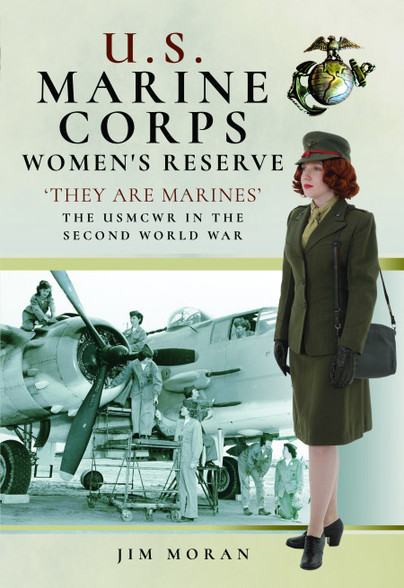 ‘They Are Marines’: Uniforms and Equipment in the Second World War

As featured by the Daily Mail:

You'll be £4.99 closer to your next £10.00 credit when you purchase US Marine Corps Women's Reserve. What's this?
Need a currency converter? Check XE.com for live rates

When the US Marine Commandant, Major General Thomas Holcomb, announced the formation of what became the US Marine Corps’ Women’s Reserve, legend has it that the portrait of the fifth Commandant, Archibald Henderson, fell off the wall and crashed to the floor – ‘in disbelief’. This branch of the US Marines was authorized by the U.S. Congress and signed into law by President Franklin D. Roosevelt on 30 July 1942.

This law allowed for the acceptance of women into the reserve as commissioned officers and at the enlisted level, effective for the duration of the war plus six months. The purpose of the law was to release officers and men for combat and to replace them with women in shore stations. The result was that between 1943 and 1945 the women of America enlisted in their thousands to ‘Free A Man to Fight’.

This book, the first of its kind, explores in detail the role of Women Marines, or WRs as they were known at the time. It also presents a detailed study of the uniforms of the WRs supported by numerous colour photographs.

This book has been written with the full support of the US Marine Corps Histories Division, the Women Marine Association and surviving WR veterans.

This book is a helpful and colourful addition to the field of research concerning female Marines in the Second World War.

Using a mix of detailed colour modern photographs and period black and white, the uniform and equipment portions of the book fills a large void in a uniform collector's reference library!

Moran's work provides a much needed in depth examination of these exceptional Marines.

Article: 'Incredible photos reveal how women Marines were thrown into the thick of it in WWII' as featured by

The book provides us with the background to the creation of the Women's Reserve, how it was formed, what the new Marines went through as the joined up and were trained. It goes on through their various jobs and job assignments, along with Administration and Polices (assignment, housing, women's authority etc), along with Specialist Units & Decorations (Band, Drill Team and more), Hawaii Duty (Overseas Duty, Staging areas etc) and their Demobilisation at the ned of the war. These all lead into the main topic of the book, with details and photos of the many items of uniform and insignia, including headgear and accessories using modern photos with preserved examples of the many uniform items. Then a significant set of 9 Appendices which provide even more specific detail, including the wartime quartermaster photos that illustrate the uniforms and how they should be worn.

Another excellent book and the ideal companion for Jim's other book on the Marine Combat uniforms.

Jim Moran's excellent book is split between the history, training, job assignments, administration, duty in Hawaii, special units and decorations, and then has a superb look at uniforms and equipment with both period and modern photos. Printed in colour on nice paper.

Jim Moran offers us again a fresh and interesting work, a perfectly documented account with all the details of the role assumed by the women during the war (known as WR at that time) together with an in-depth study of the uniforms and Complements, all supported by numerous photographs in color and b/w that will delight the painters of figures, historians and researchers.

This book must be the best reference work on the WR - especially their uniforms and
equipment. This subject has been previously neglected so I am very pleased that the
author has taken the time and effort to produce this superb tome.

Newly-published images have given a rare glimpse into the groundbreaking role female marines played during World War Two.

The photos appear in a new book, US Marine Corps Women's Reserve by Jim Moran, which explores in detail the role of female Marines, or WRs as they were known at the time. It also presents a detailed study of the uniforms of the WRs, supported by numerous color photographs.