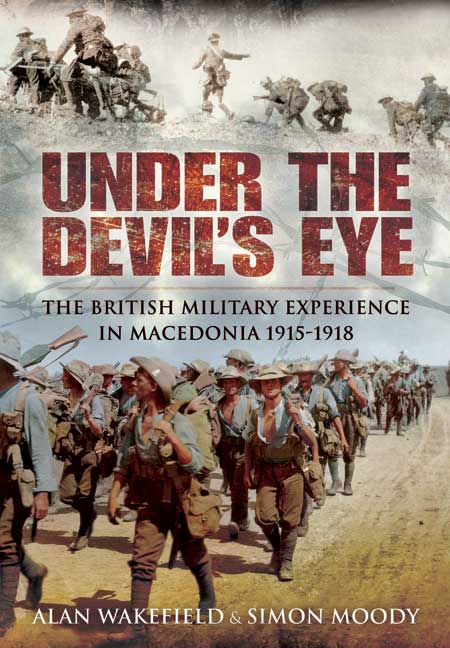 Under the Devil's Eye (Kindle)

Click here for help on how to download our eBooks
Add to Basket
Add to Wishlist
You'll be £4.99 closer to your next £10.00 credit when you purchase Under the Devil's Eye. What's this?
Need a currency converter? Check XE.com for live rates

The authors have researched the Salonika Campaign in every detail, from the arrival of the first British troops in 1915 to final victory. During this period large numbers of British and allied troops were tied up in the strategically vital Balkans. Salonika was converted into a vast military base and over 70 miles of defensive works were created. We learn of the disappointments of the British XII Corps offensive in April/May 1917 (The First Battle of Doiran) and the more successful aggressive raiding in the Struma Valley. Using first hand accounts a vivid picture of life for the British Army is painted, with the roles of the Royal Flying Corps/RAF and RNAS well covered. The campaign drew to a victorious conclusion with the defeat of the Bulgarians in 1918 but the British Salonika Army remained in place until 1921. The effect of this slow demobilisation are also covered.

The authors not only describe the campaign, but give a very good picture of what everyday life was like. They also include the air aspect. Some fascinating photographs and excellent maps complete this well-rounded account.

A thoroughly rounded, comprehensive, well written and excellent study of the British experience during the Macedonian campaign.
Highly recommended.

An interesting read for history and military enthusiasts, and those whol had ancestors involved in the campaigne.

The authors have addressed one of the great omissions by historians covering WWI. This is a well-researched study of a subject that has received far less than its deserved attention. The photo-plate section is well selected and maps in the body of the book help in the understanding of this unfamiliar part of WWI – Very Highly Recommended.

The book is rightly highly regarded and is a good, absorbing read.

“Tells the story in the words of those who served during the campaign.”
“Intriguing, readable and fitting testimony to the men who fought and died in a campaign which is seldom thought of nearly a century on.”
“Fantastic overview of one of Britain’s untold stories from the Great War which belongs on the bookshelf of anyone who wants to further their knowledge of this seldom-remembered campaign.”

This is an excellent account of a little-known but still important aspect of the First World War.

The British military expedition to Macedonia during World War 1 receives very little attention. If you
enquire with the ordinary public and ask them about World War 1 campaigns they will probably tell
you they know about France, Flanders, Ypres, Passchendaele, the Somme or Gallipoli. Few, if any,
will have heard of the Macedonian experience or the British Salonika Force (BSF). Indeed the
exploits of the BSF in Macedonia are completely overshadowed by the more famous campaigns. The
BSF was a forgotten army and they often called themselves this. They were always the last in the
order list for supplies, men and equipment.
This interesting book seeks to enhance the awareness of this mysterious and neglected campaign. The
authors have conducted excellent research and this has been helped by their employment in national
museums / archives. One of them was motivated by having a relative who served in this campaign and
through this the campaign was brought to his attention. Unfortunately the relative died prior to the
author recording his relative’s experience. The memory of him spurred the author into action and
when this book was originally produced in 2004 it was the first book on the subject for 39 years.
The first British troops arrived in this dangerous and volatile region during 1915. They were mostly
drawn from Gallipoli and by troopship from Marseilles (France) with the intention of fighting
alongside their French allies. The local Serbians were fighting against a numerically superior enemy
namely the Bulgarian Forces. The British landed at Salonika in Greece and used this port as their
main base. They had to retreat to the port in winter due to the severe winter weather. Initially the
Greek Government was not too receptive to this “foreign” army on its land and there were fractions
within the Greek Government – some supporting the allies and others the Central Powers. The King
of Greece supported the German (Central Powers) because he was related by marriage to that side.
Eventually the Greeks joined the British and the French in helping the Serbians against the Bulgarians
and the Imperial German Army. Also, Italians and Russians joined and fought alongside the Allies in
this multi-national army. The offensives by the British were designed to divert the Bulgarian’s
resources from major Franco-Serbian offensives. The spring 1917 offensive by the British (called the
“First Battle of Doiran”) was a disappointment and this contrasted with the successful attempt in the
Struma Valley. During September 1918 with the Bulgarians on the verge of collapse they still
presented a strong enemy with the Bulgarian 9th (Pleven) Division proving a hard enemy.
This book uses first-hand accounts, drawn from a variety of sources, to illuminate the experiences of
those serving in this hostile environment. Both frontline operations and those in base camp are
revealed. The effects of the Great Fire of Salonika (August 1917) and the role of the medical services
against malaria are aptly illustrated. This recently updated edition is now the standard work on the
campaign and the authors have done an outstanding service to its memory.

First published back in 2004, this nevertheless was an easy selection for Editor's Choice for this issue. The work represents painstaking research by the authors into an often neglected campaign of the war. Recently updated, this is a first-class, detailed account. With the use of many first-hand eyewitness accounts the reader learns of the conditions both at the front and at the base areas; there is a fascinating account of the Great Fire of Salonika in August 1917, and the role played by he men and women of the medical services in fighting the scourge of malaria. The first British troops landed in the Balkans during 1915 from the debacle of Gallipoli, and by troopship from Marseilles to fight alongside the French, Greeks, Italians, Russians and Serbs. This impressive work demonstrates vividly that the Allied involvement in this region was anything other than a 'sideshow'. This impressive work demontrates vividly that theAlied involvement in this region was anything other than a 'sideshow'. This would be a superb book to add to any Great War collection.

'Under the Devils Eye, Britains Forgotten Army at Salonika 1915-18', by Wakefield and Moody.

I have just finished this book and can say that it is a welcome addition not just to my book collection but to the war and the subject of Salonika as well. Salonika is like many of the 'sideshows' an increasing area of interest to many that struggles for good books.

There are too few books to cover this area of the war and perhaps the best to date is Palmers 'Gardners of Salonika'. This deals with the war from all views and is heavy on the inter allied co-operation. Many others are from the twenties and are stooped in writing of the times and void of real/truthful information. In some respects they are the reading equivilent of eating cardboard.

So it was with both delight and trepidation that i welcomed the above book, especially when i learnt that one, and now both, authors were members of this forum.

They can rest easy. This book is packed with first hand accounts that add 'real' recollections to the narrative. Subjects covered are not just the fighting, which was intermitten in this theatre, but also Medical, air, logistics, recreation and much more.

Backing this up is a vast collection of maps that help visually translate the written word and not surprisingly given Alan Wakefields vocation, more than the average amount of photos. Again these images do not just capture the soldier in the front line but all aspects of the Salonika campaign. There is also an appendix of the divisions that fought out there , which i found helpful to refer to when reading the chapters of the offensives.

The chapters do well to split up the war in to managable sections and as i have mentioned already give an insight to all aspects of the life that the men and women endured out there. If the Bulgars were not on them then the climate was. It is good that the authors focused in part on the recreational and medical sides of the campaign as these areas were major parts of this war. The men rarely had leave away from Salonika and were forced to make there own and the climate made medical aid a very important part of the army.

My advice, whilst biased, is to get hold of a copy and learn something about a section of the 1914-18 war that passes many by.

The first British troops arrived in the Balkans in 1915 to fight alongside the French and support the Serbians against teh Bulgarian forces. Following their painstaking research, in this revised and updated editior of a book first published in 2004 (which was then the first English language title dedicated to the Salonika capaign for thirty years) the authors detail the events of this neglected part of the history of the First World War.