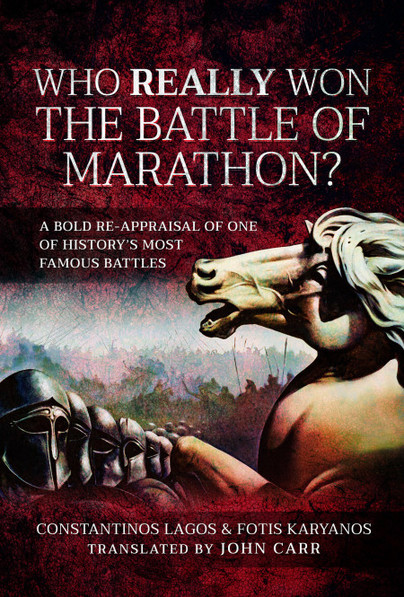 Who Really Won the Battle of Marathon? (Kindle)

Click here for help on how to download our eBooks
Add to Basket
Add to Wishlist
You'll be £4.99 closer to your next £10.00 credit when you purchase Who Really Won the Battle of Marathon?. What's this?
Need a currency converter? Check XE.com for live rates

Overall, Lagos and Karyanos make a convincing case, backing it up with good maps and end notes. This is an excellent book to read if you are interested in not only ancient battles, but life and through in those times, as well as the consequences of the historic battle. Originally written in Greek, the translator, John Carr has done us a great service providing this book in English.

Lagos and Fotis Karyanos have done admirable research, the illustrations are impressive.

A book with fresh ideas and of great interest.

We all know about the Battle of Marathon, or do we?. In this enjoyable and engaging re-appraisal of one of history’s most famous battles the authors paint a vivid picture and overturn many ‘established facts’ with the use of archaeology . – Very Highly Recommended.

Lagos and Karyanos deploy an interesting combination of sources and archaeology to create their reconstruction of Marathon, and their digressions into the competing interpretations of the evidence provide insight into the workings of ancient historians.

This is a well researched and laid out book. There are lots of original sources and a large reading list.

I can see this being used by wargammers to recreate this version of the battle. I won’t spoil the authors’ views of our famous marathon runner….

I also like the Agincourt comparison nugget right at the back of the book. It is a very interesting read…

I came to this book not knowing much about the battle, and with therefore an open mind. My assumption was that I would read a general narrative. Instead I seem to have bye passed the basic texts and moved straight to the authoritative account of what did happen and what may have happened. A very enjoyable book and a pleasure to be conducted around this battle by experts.