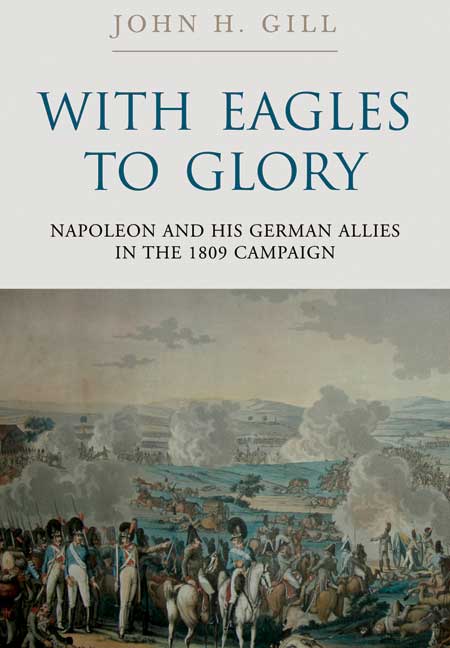 With Eagles to Glory (Hardback)

Napoleon and His German Allies in the 1809 Campaign

Add to Basket
Add to Wishlist
You'll be £29.99 closer to your next £10.00 credit when you purchase With Eagles to Glory. What's this?
+£4.50 UK Delivery or free UK delivery if order is over £35
(click here for international delivery rates)

Aiming at a union of German states under French protection to replace the decrepit Holy Roman Empire, Napoleon sought to expand French influence in central Germany at the expense of the Austrian and Prussian monarchies, ensuring France's own security. The campaign Napoleon waged in 1809 was his career watershed. He suffered his first reverse at Aspern. Victory was achieved at Wagram was not the knock-out blow he had envisaged.

In this epic work, John Gill presents an unprecedented and comprehensive study of this year of glory for the German soldiers fighting for Napoleon, When combat opened they
were in the thick of the action, fighting within French divisions and often without any French support atall. They demonstrated tremendous skill, courage and loyalty.

This is an excellent work for both the casual and serious historian and is a recommended addition to anyone’s library.