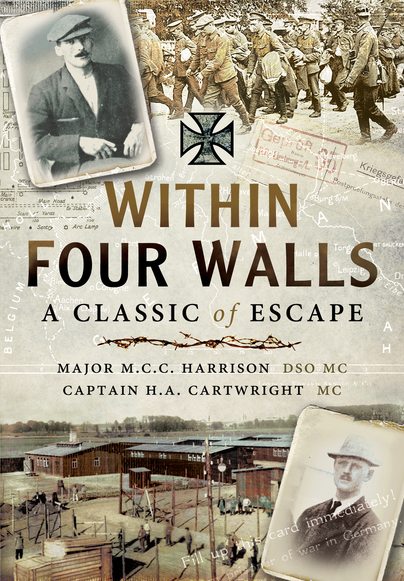 A Classic of Escape

Add to Basket
Add to Wishlist
You'll be £25.00 closer to your next £10.00 credit when you purchase Within Four Walls. What's this?
+£4.50 UK Delivery or free UK delivery if order is over £35
(click here for international delivery rates)

Within Four Walls tells the remarkable story of two British officers and their war effort, capture by the Germans, imprisonment and eventual escape to Holland.

The authors were made to write a concise and accurate account of their incarceration in 1917 and 1918 for the War Office, the basis of which forms the narrative for this book. Although many points were censored while the war was still ongoing, the authors filled in the gaps before the book was published in 1930.

The pair were both stationed in Mons at the outbreak of the war but were both captured and transferred to a PoW camp in Burg, Germany. Almost immediately after arriving the pair were planing their escape, akin to the events seen in The Great Escape. After tailoring and dyeing their own guard uniforms they simply strolled out of the Burg camp, enjoying nine days of freedom before being recaptured at Rostock, some 300km away. They were then moved to a camp in Torgau but soon after arrival they began plotting their second escape, this time by tunneling out of the camp.

Several further escape attempts were made until they managed to escape for good in 1917 after a nine-day walk to Holland. Complete with a selection of original photographs and diagrams drawn by the authors during their years of incarceration, this book reads like the screenplay of a Hollywood blockbuster and is a riveting account from the first page until the last.

Just as gripping as The Great Escape , shows where determination can get you . A excellent read from start to finish .