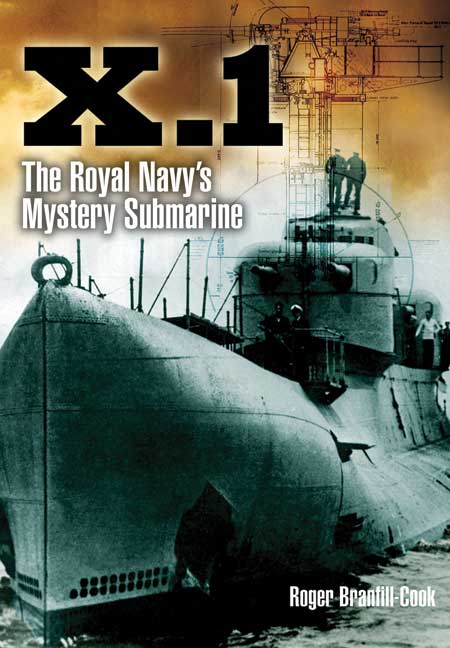 Click here for help on how to download our eBooks
Add to Basket
Add to Wishlist
Get X.1: The Royal Navy's Mystery Submarine (Kindle) for FREE when you purchase 2 other eBooks.
Need a currency converter? Check XE.com for live rates

The 'X' stood for experimental, but it might equally have meant extraordinary, exotic or extravagant, as this giant submarine attracted superlatives – the world's largest, most heavily armed, and deepest diving submersible of the day. X.1 was a controversial project conceived behind the backs of the politicians, and would remain an unwanted stepchild. As British diplomats at the Washington naval conference were trying to outlaw the use of submarines as commerce raiders, the Admiralty was designing and building the world's most powerful corsair submarine, to destroy single-handed entire convoys of merchant ships.

This book explores the historical background to submarine cruisers, the personalities involved in X.1's design and service, the spy drama surrounding her launch, the treason trial of a leading RN submarine commander, the ship's chequered career, and her political demise. Despite real technical successes, she would finally fall foul of 'black propaganda', aimed at persuading foreign naval powers that the cruiser submarine did not work; even today uninformed opinion repeats the myth of her failure. However, it was completely ignored by other navies, who went on building submarine cruisers of their own, some larger than, but none so sophisticated as, X.1. The book analyses in detail the submarine cruisers built by the US Navy, the French and the Japanese, plus the projected German copy of X.1, the Type XI U-Boat, paying belated tribute to the real importance of the mysterious X.1.

A remarkable book about a remarkable submarine... The depth and quality of the author's research are entirely admirable.

The man and the moment meet in this superb, detail-rich survey of giant pre-nuclear submarines .The X-1's history, description, and analysis are encyclopedic; it stands alone as an exemplar of excellent military technical writing. By putting the X-1 in its historical context with other similiar "boats", the book becomes an important historical work about a world almost at war.The wealth of photographs, David Hill drawings,and schematics are peerless.This work is the last word in the in this little known area of significant technological development between the wars.

This book, with its historical interest in submarine cruisers and in particular the X.1, was exactly what I was looking for as part of my study into submarine history, together with both the treason and political dramas that were played out over this particular platform.
The drawings and photographs certainly bring the book to life. For me, a very rewarding read.

An excellent book , well researched and illustrated covering the little known history of what was for many years the largest submarine in the world. The drawings depicting the interior of the X1 are quite unique.

Ships' names are often re-used. In one instance, for example, I confused a British WW2 Tribal class destroyer (HMS Maori) with an earlier ship of the same name and class from WW1. I mention this to explain that the subject of this book (HM Submarine X1) has no similarity to or connection whatsoever with the X-Craft which famously attacked the German battleship Tirpitz in 1943. Whereas those X-Craft displaced 270 tons, this much earlier X1 displaced a much larger 2,700 tons. In a technical though fascinating work which is occasionally hard-going as a read, I learned a great deal not only about HMS X1 but also about many of the topics on the periphery of which I already had some knowledge. I did not previously know, for example, that David Beatty achieved Flag rank (i.e. two star admiral) at the age of 39 and was the youngest officer to gain such early promotion since Nelson - but I digress!

HMS X1 was an experimental submarine (hence the `X'). Launched in 1923 and commissioned in 1925, she was dogged by bad luck and mechanical misfortune throughout her career which, author and historian Roger Branfill-Cook aptly describes at one point as a `Litany of failures.' Indeed, she was so prone to anything and everything going wrong that when she finally capsized in dry dock in 1931, the event was viewed as a very good reason to ceasxe all spending on the boat. She was finally scrapped in 1936. All of which might have lead to a very boring read about a very uninspiring boat (all submarines being boats - not ships) - but not so. Instead, what we learn is the existence of a vessel which was many years ahead of its time. Both the concept and the design of this a very large submarine sporting four 5.2 in. guns - arranged in two turrets, in addition to six forward-facing 21 in. torpedo tubes was as sound as any. The appropriate machinery to power such a vessel was not yet, however, of the standard required and caused the vessel to become a very expensive nuisance. As is so carefully explained, it was that ongoing nuisance factor which lead to everyone overlooking the true worth of the vessel as they wrongly concluded she had no real place in what was then regarded as a very modern navy.

The book begins with the history surrounding the emergence of the first really big submarines and the perception which existed in some minds at the end of WW1 that future navies would include underwater-going cruisers, aircraft carriers and possibly more. In support of this, the K class and M class submarines are afforded full exposure complete with line drawings and photographs. The M class (circa 1917) being originally supposed to carry a single 12 in. gun of the type carried by Formidable class battleships but only M1 was so equipped. M2 was converted to carry a seaplane and M3 to mine-laying duties. It is from the inclusion of this peripheral information that we come to realise the depth of research and information included on every aspect of the story of HMS X1.

The following chapters are; 2. Design criteria, 3. Propulsion machinery, 4. Handling, 5. Armament, 6. Hull, fittings & complement, 7. Trials & Tribulations, 8. A Cushy billet, 9. A Litany of failures and 10. An Unlucky fall. That fall was the incident in which the boat capsized in dry dock and, ordinarily, might have brought the book to its conclusion. Instead of this, however, we find two more exhaustive chapters in which other navies recognised the value of the larger submarine with Chapter 11 covering the US, French, Japanese and German reactions. Chapter 12 allows the author to place his own thoughts into perspective by dwelling on `what might have been' amongst other topics.

Lavishly illustrated with plenty of line drawings and plans covering every element of the different craft under discussion, artwork and plenty of relevant historic photographs, the work concludes with three Appendices, Notes, Bibliography and Index and is as complete as one might hope to find.

Altogether a definitive account of a single vessel viewed from every conceivable angle.

A very comprehensive and detailed history of the submarine, well-illustrated and with many plans and drawings.

Grabs the reader's attention from the start.

As the author so able demonstrates, at the time of her completion X.1 was the worlds largest, most heavily armed and deepest-diving submersible of its day.

The illustrations include fourteen detailed drawings of interiors of the X.1 that have better detail than any photograph, and the numerous plans and drawings give the reader a thorough visual description of this unusual and unique British submarine. Anyone who already has the excellent book on the Japanese I.400 class “submarine aircraft carries” will want to have this book on the biggest conventional British submarine as well.

Naval operations in World War Two began on the first day of the conflict and continued until the September 3, 1945, surrender ceremony on the battleship USS Missouri (BB-63). These operations were a complex series that interconnected in a way that land an air battles seldom approached. Since maps can convey both space and time in an understandable fashion, an atlas is a very good way to tell the history of the war at sea between September 1939 and September 1945. The maps in this volume are areranged chronologically so it can be read as a history of the naval war. But each indivdual map is self-contained, so any map can be used as a reference to the particular operation it covers.

The maps are in color, which allows color-coding of different forces for easy identification. There is a block of text with each map that provides details relevant to the map, and a full-page table explaning the symbols and abbreviations used throughout the book. Some are specific to the ships of a particular navy and there are generic symbols for ships such as escort carriers, landing ships and merchatmen in general. The maps themselves vary in coverage. For example, the very first map shows the different British Navy stations worldwide at the start of the war along with the types and numbers of ships assigned to each. There are similar maps for the French Navy, German Navy, Italian Navy and a map that covers the ships in British home waters in late 1939. Individual battles are covered with one or several maps from the Battle of the River Plate (one map) to the German invasion of Norway (6 maps).

Additional maps showing strength and locations of the naval forces of Italy, Japan and the United States are provided when the chronology reaches those countries' date of entry in the war. Also, many battles and operations are included that don't always get much attention, such as the 6 March 1943 battle in Blackett Strait in the Solomon Islands. Throughout this book details have been carefully checked with post-war research to provide as accurate a picture of the events described as possible. However, on page 185 there is an error both in the text and on the map when it is said the U. S. destroyers Dunlap (DD-384), Craven (DD-382) and Maury (DD-401) launched thirty-six torpedos in one salvo at a force of four Japanese destroyers. In fact, those three U. S. destroyers could only launch a total of twenty-four torpedos in one direction at one time.

The fact that the pages are nine inches by twelve and a half inches lets the maps and texts be an easily-readable size, and the coverage is so extensive that every serious student of World War Two at sea will find this a highly useful book to have. It is packed with information in an easy to use format, and is well worth the purchase price. (RPS)

With all of the books published on warships and naval operations during the Twentieth Century, most new books are talking another look at a subject covered many times before by other authors. Then occasionally, a book is published that covers an important warship that has somehow managed to escape serious coverage before. This new book is one of those rare new books. The author has written an engaging account of the development and operations of the x-1. The text is enhanced but very good illustration in the form of photographs and drawings, spread through the body of the book.