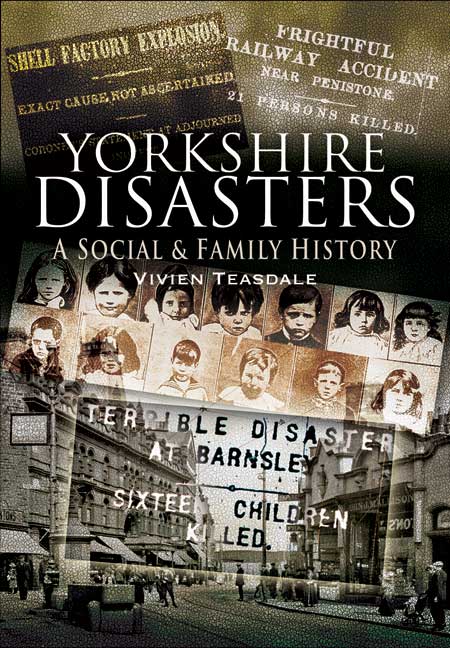 Add to Basket
Add to Wishlist
You'll be £7.69 closer to your next £10.00 credit when you purchase Yorkshire Disasters. What's this?
+£4.50 UK Delivery or free UK delivery if order is over £35
(click here for international delivery rates)

What have Penistone, Hull, Thirsk and Bradford got in common? Along with many other places in Yorkshire, they were the scenes of major disasters. This book is a fascinating collection of events including railway accidents, lifeboat disasters, mining disasters, floods, boats sinking, chimneys collapsing and ferries being blown up. The
stories explain how the disasters happened, how people reacted at the time and where the blame was seen to lie, though all too often the word 'accident' covered a multitude of sins. The disasters cover a range of types, places and dates showing that no one is ever really safe anywhere, any time!

This book describes 21 major disasters which occurred around the Yorkshire area, mostly during the 19th Century, but several are as late as the Second World War, and one ventures back almost a millennium to the most in famous of them all; the Harrying of the North by William the Conqueror. A very broad range of incidents are covered; including industrial fires, building collapses, mining accidents, shipping tragedies, rail disasters, flooding and war. Most are described in up to ten pages, using a mixture of the author's narrative, photographs, eye witness reports, details from inquests and lists of those killed. These combine to give a concise and fascinating account of these dreadful events, but they are also rich in the social history of Yorkshire, and provide a glimpse into the daily lives of our ancestors.