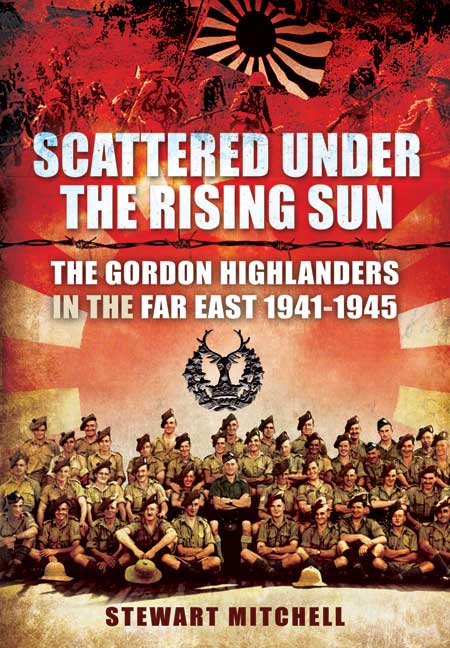 Scattered Under the Rising Sun (Hardback)

Add to Basket
Add to Wishlist
You'll be £19.99 closer to your next £10.00 credit when you purchase Scattered Under the Rising Sun. What's this?
+£4.50 UK Delivery or free UK delivery if order is over £35
(click here for international delivery rates)

While there have been many fine and inspiring individual POW accounts, Scattered Under the Rising Sun is unusual in that it describes the horrific ordeal at the hands of the Japanese of the officers and men of 2nd Battalion Gordon Highlanders.

The Battalion was posted to Singapore in 1937 with their families. When the Japanese invaded Malaya in December 1941, the Gordons fought bravely until the surrender of Singapore on 14 February 1942 and those who had not been killed became POWs. After initial incarceration in Singapore the Battalion was dispersed. Many were sent to work on the infamous Thai-Burma railway, others in the mines of Taiwan and Japan and the remainder to other slave labour projects. Many also had to endure long periods in 'hell-ships', only to be killed when torpedoed by allied submarines.

All suffered crippling hard labour, starvation, brutality and tropical diseases. Rank was no protection from death. Of the 1,000 men involved initially, only some 600 lived to be liberated in summer 1945.

The author of this moving and superbly researched book captures the strong collective regimental spirit and the humour
and cooperation without which so many more would have otherwise succumbed to the unimaginable conditions and brutality. By any yardstick, this is an inspiring tale of sacrifice, courage and survival against appalling odds.

As featured in VE Day commemorations

The Press and Journal and Evening Express (Aberdeen), 8th May 2020

The triumph of the human spirit of the men of the 2nd Battalion Gordon Highlanders in overcoming incredible odds and adversity in the Far East during World War 2 has been brought to life in full in 'Scattered Under the Rising Sun'.

Stewart Mitchell tells the compelling and heroic stories of members of the Gordon Highlanders regiment who were posted with their wives and children to the far east, where caught up in the Pacific War.

Including an appendix listing each member of the battalion (as well as a portrait where available) the author, a volunteer researcher at the Gordon Highlanders Museum, examines its fate in the Far East.

What Stewart Mitchell's book, about the Gordon Highlanders in the Far East during the Second World War, has achieved is to highlight the true ethos of the old regimental system, its geographic family ties that extended well beyond that of the fighting unit. It was those ties that allowed Stewart Mitchell to so well carry out his outstanding research. mitchell has captured perfectly how the regimental spirt made The Gordon Highlanders a remarkable, durable body of men.

The book contains some excellent photos including the last draft of Gordon Highlanders , liberated POWs at Funatsu and repatriated Cpl William Gray with Donald the Thai Duck. The nominal roll of the battalion is supported by small portrait images of most of the men. Altogether, a very readable and valuable record of a fine battalion.

The triumph of the human spirit of the men of the 2nd Battalion Gordon Highlanders in overcoming incredible odds and adversity in the Far East during World War 2 is brought to life in full in a new book.

The book tells the story of the men and their families, bringing to light many previously untold accounts of courageous spirit, humour and compassion.

Stewart Mitchell is to be commended for writing this memorial and celebration of their sheer fortitude in condidtions we cannot now imagine. Many will read this book with sorrow, even tear: but it should be read with pride, to remind us how ordinary Scots can rise to unheard-of levels of endurance and resistance against a bestial enemy. Book of the Month.

An extraordinary 'band of brothers' are celebrated in a new book commemorating the 70th anniversary of one of the darkest chapters in the history of the Gordon Highlanders.

The human side of a story so horrific that few survivors ever spoke of it again is set to be told in a new book. Stewart Mitchell, a volunteer at the Gordon Highlanders Museum in Aberdeen, has written a book commemorating the 70th anniversary of the event.