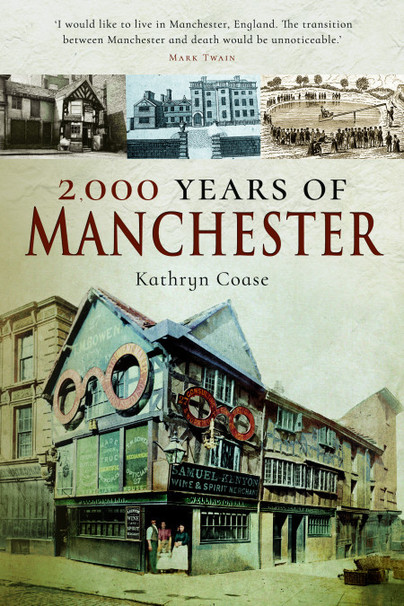 Add to Basket
Add to Wishlist
You'll be £16.99 closer to your next £10.00 credit when you purchase 2,000 Years of Manchester. What's this?
+£4.50 UK Delivery or free UK delivery if order is over £35
(click here for international delivery rates)

This is not a chronological history of Manchester with lists of facts and figures. Rather, it is an eclectic mix of fact, fiction, legend and myth which presents the history of Manchester from its beginnings as a Roman settlement, then as an insignificant market town, to its place as a city at the heart of the Industrial Revolution and beyond.

The author has attempted to capture not only the often tragic lives, times, struggles and beliefs of the city’s ever-expanding population, but also its resilience and humour. Including photographs, illustrations, poems and quotes, the book ranges from the humorous, including the stories of “Spanking Roger” and the “Manchester Mummy” to the tragic stories of “Cholera” and “Mary Bradley”, together with the bizarre “Pig Tales” and the criminal “Scuttlers” and “Purrers”.

This is a well-researched, well-written and, most importantly, entertaining and informative read, presented in an unusual yet accessible and easy-to-read format, intended to appeal to the widest audience.

Coase goes right into it no preamble and offers brief snippets on topics, like regional history, industry, architecture, anthropology, points of interest, important people, war, religion, criminal activity and prisons, public health and hospitals with squared off phrases and quotes to serve as captions and catch the eye.

In sum, this is a highly entertaining and informative book that I recommend to anybody who’s ever wondered about Manchester’s history (or the history of the UK). It can be read whole or by topics and it also makes for a great reference book. It is full of inspiration for writers and historians trying to get a sense of how things have changed over time and to get a perspective on the evolution of a city and its people. Fabulous.

This is an excellent and fun book that conveys many of the stories and plenty of the history of Manchester. This is a history book that is actually fun to read!

As a Mancunian, Kathryn Coase has been interested in the history of Manchester for many years and has possessed a longstanding ambition to research and write a book on the subject. After 30 years of teaching, she has finally decided to take some time out in order to fulfil this dream.