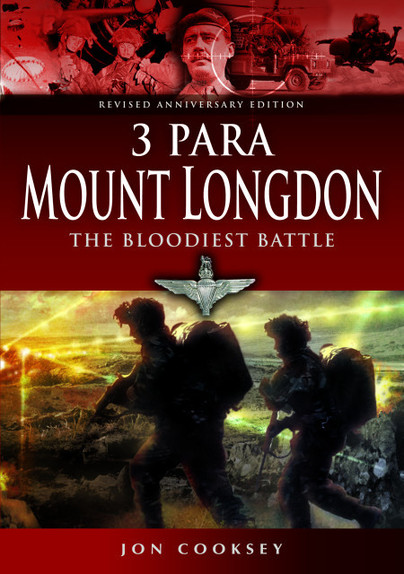 Add to Basket
Add to Wishlist
You'll be £14.99 closer to your next £10.00 credit when you purchase 3 Para – Mount Longdon. What's this?
+£4.50 UK Delivery or free UK delivery if order is over £35
(click here for international delivery rates)

June 1982, and in the middle of a South Atlantic winter, the Falklands War is at its height. The Parachute Regiment has already been in action - 2 Para securing a hard fought victory at Darwin-Goose Green at a heavy price in killed and wounded including their CO, Lieutenant Colonel 'H' Jones, later awarded a posthumous VC.

Now, two weeks later, as they look up at the long, frost shattered spines of rock which stab the air from the summit of Mount Longdon on the outer ring of the Stanley defences, the 'toms' of 3 Para know it is their turn. As they prepare to assault their objectives - features code named 'wing forward', 'fly half' and 'full back'- the men of 3 Para know they are in for a fight. Just before 'zero' some of them are simply told to pray.

This, the first in a new series on Special Operations, tells the story of 3 Para and the often-neglected struggle for Mount Longdon. It was a battle which tested the discipline, comradeship and professionalism of the paras to the limit; it was a battle which witnessed another posthumous VC; it turned out to be the bloodiest battle of the entire Falklands Campaign.

★★★★★ I believe this will soon become one of the 'Must have' books covering the Falklands campaign and Mount Longdon in particular.
Outstanding...

★★★★ The book is short, to the point and well illustrated. It doesn't concern itself much with the "why there is a war on", which is okay with me, but moves quickly on to join 3 PARA on the arduous journey that takes the battalion to and through the battle of Mount Longdon.

★★★★★ It was an easy read. I particularly liked the graphics, which explained as well as anybody, and better than most, who fought which battle and when, with particular emphasis on, of course, as the title suggests, 3 Para on Mount Longdon.

Extremely well laid out, the book provides the reader with an understanding of what had gone immediately before the battle for Mount Longdon. 2 Para had earlier encountered heavy opposition at Darwin and Goose Green - and had lost their Commanding Officer. Very soon Mount Longdon would follow and would prove to be the bloodiest battle of the entire campaign. Whilst nobody knew how hard that battle would be beforehand, Cooksey provides the personal thoughts of a 20 year-old private from B Company, 3 Para who admits to being ‘proud, then sad, then scared.’

For those who like military history, I can only suggest you will not be disappointed with this exceptional account of the battle for Mount Longdon. For those of you who know nothing at all about the Falklands War, I really can’t think of a better place to start that interest.

Like many a fascist state before them the Argentine Junta thought they could steal territory that belonged to someone else who they considered weak. It came as a shock when Britain rapidly assembled a Task Force and sent it 8,000 miles to eject the Argentine bandits. Once more British troops used great courage to make up for the venial politicians who had allowed the emergency to arise – Highly Recommended.

A really interesting account of events we lived through.