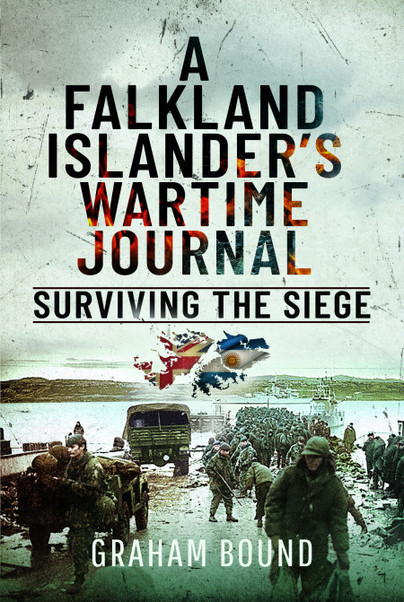 Add to Basket
Add to Wishlist
You'll be £17.50 closer to your next £10.00 credit when you purchase A Falkland Islander’s Wartime Journal. What's this?
+£4.50 UK Delivery or free UK delivery if order is over £35
(click here for international delivery rates)

Port Stanley was the tiny capital of a British colony known to few beyond the world of stamp collecting. But then, suddenly, in April 1982, it was the place-name on everyone’s lips. The outcome of a war, for which Britain had mobilised its most powerful task force since 1945, would be decided by the flag which flew over the corrugated iron and timber cottages of Stanley. The town became the epicentre of a ferocious conflict.

Many islanders left the town following the invasion. But a few hundred remained. Among them was Graham Bound, who was then the editor of the Islands' only newspaper. This book is based on his journal, written during the occupation and siege. Such was the intensity of the fighting for the town, that the Ministry of Defence in London announced that it would be on the receiving end of “the heaviest artillery bombardment since the Korean War”.

The journals were stored, untouched and unread, for 39 years, before the author rediscovered them and prepared them for publication. Among the notebooks were unprocessed photographs that he took at the time. Some of these never-before seen photos are published in this book.

This is a detailed account of the Falklands war, in particular the siege of Stanley, from an islander's point of view.

Featured as PICK OF THE MONTH

Highlights:
'***** An enlightening new take on a well-documented chapter.'
'This is a great tale, one that politicians and senior servants should read and learn from.'

Highlisht: 'This is a great tale, one that politicians and senior civil servants should read and learn from.'

'The Falklands, then and now' -- Article as written by the author

"Forty years after the liberation, the local paper's former editor recalls a terrifying interrogation and compares the images he hid from the Argentinians with recent shots documents the debt the Islands can never repay"

This is a really good book, an interesting read, and the day-by-day descriptions of events large and small.

I was still at primary school in 1982 and my only real memory of the Falklands War is of classmates huddled round a radio at lunchtimes in the school canteen, eagerly listening to BBC World Service news reports from the other side of the world. It was strange to realise now, through reading Graham Bound's fascinating memoir, that the Islanders themselves relied on those exact same news reports to find out what was happening just down the road. Bound's journals seem to have been minimally edited so his writing retains a compelling immediacy. I could easily envisage him lying awake on the floor behind stacks of chairs, deafened by the encroaching bombardment, or imagine the worry of not being able to contact friends on outlying farm settlements when the local radio network was outlawed. I've read a number of civilian wartime memoirs over the past few years and A Falkland Islander’s Wartime Journal stands out for giving an authentic, day by day, sense of what it was like to be in the midst of such chaos.

I appreciated too that the Islanders experience and expectations were very different from the belligerent, jingoistic social memory of the war that has been retained in England. Bound's journals reveal that the Falkland Islanders themselves hadn't felt particularly valued by the UK, and certainly not by Westminster, until their being invaded provided a politically expedient distraction from the Tory government's woes at the time. Exactly forty years later, I did recognise a repeat of this political tactic being employed!

A Falkland Islander’s Wartime Journal is a very readable memoir which I particularly enjoyed for its focus on ordinary people during wartime. The interactions between Islanders and Argentine troops are particularly illuminating as these moments don't fit with either nation's Governments' declarations of strength and power. Bound does also explain some of what happened militarily, but doesn't get bogged down in endless military strategy. I felt I came to know these Island people a little and it would interesting to also learn how they coped in the war's aftermath. Once all the news reporters had gone and the global spotlight faded, how normal a 'normal life' could actually be resumed.

Recommended for history buffs who want a little more local flavor in their reads.

A Falkland Islander’s Wartime Journal is a fascinating insight into what it was like to live there in 1982 during the occupation by Argentina. Graham Bound worked for the local newspaper at the time so his daily diary entries were personal, but also interested in capturing what was going on from a journalist’s point of view. The book captures the tension on the island before the invasion, during the occupation and post-war. The author describes the Falklands as a forgotten colony and you really do come to understand just how desolate and alone the citizens were. As Bound describes how humiliating and worrying it is to live this way, the reader can’t help but relate these feelings to the people of the Ukraine who are experiencing the same thing on a much larger scale. Feeling like a political pawn, forgotten, repressed – this book captures a fascinating event in history and is sadly still relatable. I recommend.

The author described life under occupation: repression, humiliation, worry, lack of freedom, phones monitored, mail opened, two-way radios confiscated, their radio station taken over and switched to propaganda and Argentine music.
I visited the Islands during a cruise ship’s port-of-call in 2009. I most remember the empty, wide open spaces where battles were fought. Now, having read this book, I’d like to visit again.

Forty years ago I was barely a teenager when the Falklands’ War broke out. The conflict was my first experience of my country being at war with another nation, and I followed events avidly even though the theatre of war felt impossibly distant and remote.
The author of this excellent book, Graham Bound, then the editor of the sole Falkland Island newspaper based in Port Stanley, was one of few hundred inhabitants who stayed after many had fled following its occupation by Argentine forces. The journal that he wrote throughout the siege of the town forms the basis of this book, along with photographs which he took at the time.
Pretty much all of the content is unseen, and it is vivid and revealing. Graham gives a riveting day-by-day (and sometimes minute-to-minute) account of the conflict, sharing details of the islanders daily life under siege and their relationships with the Argentinian soldiers.
If you’re interested in a first-hand account of one of the major engagements of the conflict, with a wealth of accurate detail and unvarnished truth, then Graham’s book comes highly recommended.