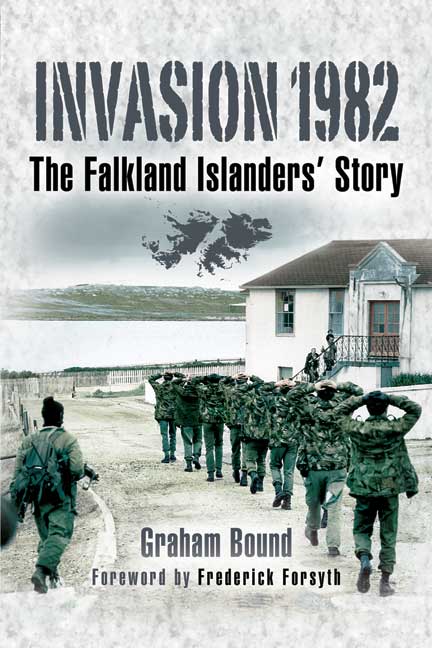 Click here for help on how to download our eBooks
Add to Basket
Add to Wishlist
You'll be £4.99 closer to your next £10.00 credit when you purchase Invasion 1982. What's this?
Need a currency converter? Check XE.com for live rates

Falkland Islanders were the first British people to come under enemy occupation since the Channel Islanders during the Second World War. This book tells how islanders' warnings were ignored in London, how their slim defences gave way to a massive invasion, and how they survived occupation. While some established a cautiously pragmatic modus vivendi with the occupiers, some Islanders opted for active resistance. Others joined advancing British troops, transporting ammunition and leading men to the battlefields. Islanders' leaders and 'trouble makers' faced internal exile, and whole settlements were imprisoned, becoming virtual hostages.

A new chapter about Falklands history since 1982 reveals that while the Falklands have benefited greatly from Britain's ongoing commitment to them, a cold war continues in the south Atlantic. To the annoyance of the Argentines, the islands have prospered, and may now be poised on the brink of an oil bonanza.

Graham Bound has managed to find an interesting niche amongst all the books written about the Falklands War. His book concentrates on the role of those who were on the island when the invasion started. This means the Falkland Islanders themselves and the role of the Naval Party 8901 who were the initial defenders. In fact, his book offers one of the most comprehensive accounts of the events of April 2nd. This is a topic that is too often passed over briefly by other books which are quick to home in on the role of the Task Force and the invasion to reconquer the islands. This book looks at the initial defence and then the role of those who found themselves foreigners in their own land as the Argentines imposed their laws, customs and systems on a reluctant population. Indeed, one is constantly reminded of World War Two stories of occupied France and the role of resistance. Although it should be noted that, with the possible exception of Major Patricio Dowling (an Argentine of Irish extraction), the Argentine authorities were nowhere near as evil as the Gestapo were. In fact, some of the Argentines responsible come across as being surprisingly sympathetic from this book. The book makes it pretty clear though that the Falkland Islanders loathed the Argentines and did little to help and much to hinder their occupation. Whereas, they saw the British as their liberators and did much to aid in the recapture of the islands. It is pretty clear from Bound's book where the loyalties of virtually the entire island lay.

Graham Bound had an excellent view of the events of 1982. He had been the editor of the Penguin News service during the war and spent the war in Port Stanley. He then went on to have a very interesting career in journalism and largely as a result of his work on and around the Falklands Conflict. He is clearly sympathetic to the plight of the Islanders but still gives credit where credit is due. In many ways, this book makes an excellent counterbalance to the weight of military books on the market. By all means read thoe military accounts, but don't forget the people that they were supposed to be fighting for too.