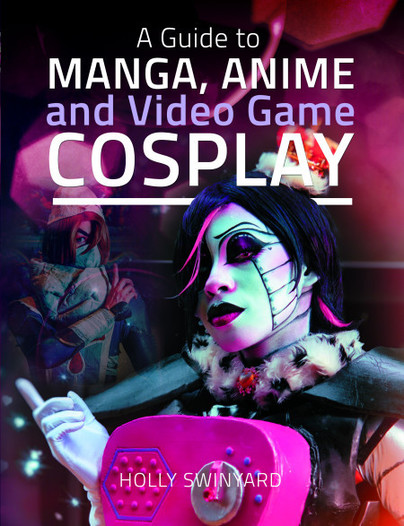 A Guide to Manga, Anime and Video Game Cosplay (Paperback)

Preorder
Add to Wishlist
You'll be £20.00 closer to your next £10.00 credit when you purchase A Guide to Manga, Anime and Video Game Cosplay. What's this?
+£4.50 UK Delivery or free UK delivery if order is over £35
(click here for international delivery rates)

Do you find yourself sat at home wishing you could be in your favourite video game? Or dream of a time when you pretended you were Sailor Moon? Or do you want to embody your Dungeons and Dragons character for real? What’s holding you back? Maybe you need to introduced to cosplay!

Cosplay is a phenomenon that is taking over the world. If you haven’t seen it yet, have you not been looking at social media? Cosplay is a mix of exciting craft skills, heady escapism and passion for pop culture that lets you be whoever you want, whenever you want. Cosplay has made its way into TV shows and documentaries, been included as part of film premieres and video game launches, it’s even referenced in the comics, manga and media it comes from! Talk about meta.

But what is this super popular hobby? Well, pick up this book, and it’s twin A Guide to Movie and TV Cosplay, to get all the answers. Because it’s more than just dressing up, promise.

With a little bit of help from this handy, dandy guide to cosplay, you can get stuck in. Learn about the history of the hobby (it’s been around longer than you’d think!), where it came from and how it got to be the way it is now, get your head around making and designing costumes, find out how about all the amazing skills people are using to make these costumes, and perhaps even try a few yourself. Who knows, you might be rocking out as Astro Boy, Chris Redfield or All Might at the next big comic con! So why not give it a try and play make believe for a day.

Cosplay, and how to get it… Holly Swinyard waxes lyrical about the cosplay phenomenon in relation to Manga, Anime and Video Games.

bout a year before the pandemic, I attended my first Comic Con in London. I was spellbound being in the same room as luminaries from the big and wee screen such as David Warner, Tom Baker, Peter Mayhew and Bernard Cribbins. But these acting talents were not the only ones proficient in becoming a fictional character at this convention.

As part of this fun day, many of my fellow Comic Con attendees had turned up in an amazing array of breathtaking professional looking, homemade costumes. Their cosplay tributes were seen in their inspiring and heartfelt homages to characters in the fictional world of film, TV, anime, video games and more. Tributes included Deadpool, The Incredibles, Star Wars and various video games characters.

In Holly Swinyard’s book A Guide to Manga, Anime and Video Game Cosplay, this author passionately writes about cosplay in a short but succinct 128 pages. This book is her welcome follow up companion to A Guide to Film and TV Cosplay. Swinyard often refers to her first book and adds that both books;

“are little portals for anyone who wants to take a look at cosplay and everything that goes with it”.

Swinyard is a passionate and credible advocate for this subject as she is a cosplayer herself and she is also the editor, of the magazine, The Cosplay Journal. Her book A Guide to Manga, Anime and Video Game Cosplay is divided into three sections that often have some merging of ideas and discussion topics. Swinyard’s camaraderie as an author is felt immediately, as she asks you to join her,

“into the wonderful world of escapism, artistic crafts and fantastic creation that is cosplay.”

Her friendliness and never-ending enthusiasm for this subject and her sharing of ideas I had seen as traits in other cosplayers. I had been impressed by these attributes when I attended the Comic Con. I noticed those dressed up in similar ways and from the same pop culture universes always gave nods of recognition, high fives and advice on costume making and makeup to other wannabe cosplayers. These strengths are mirrored in this book, in the personality of the author, the content and those cosplayers seen in photographs within this book.

In the first section, Swinyard examines what cosplay is, the benefits for individuals in using cosplay and its history. She explores the popularity and lure of cosplay for adults and argues that cosplay is an extension of dressing up and play, where one can escape from reality, create a fantasy and have fun. She adds this activity also encourages,

“new sense of self and inner strength”.

Swinyard reflects on this activity and suggests cosplay is an activity where you can add your imagination uniquely and express your own thoughts about a character. This she believes is carried out by the use of your own choice of creative arts in creating costumes, applying makeup and in prop making. The end result has you expressing these in your character in your own individual way.

The history of cosplay is vividly told from its earliest uses to the present day, and the author recalls those early conventions and cosplay tributes. In doing so she discovers the first use of the word cosplay – attributed by a Japanese journalist – and the first cosplayer. In her research, she debunks those misconceived myths related to these areas. You’ll be surprised at the origins of this craft and I concur with the author as she advocates that historical use of cosplay should include cavemen dressing up when telling stories around the fire and those masked balls.

Her arguments pertaining to those more recent cosplay tributes in manga, anime and videogames are supported in a selection of stunning photographs from conventions from the 1980s and 1990s. The use of these genres in cosplay is supported in her fascinating research and histories of these unique forms of cosplay.

She details the first uses of manga (cartoon strips) that led to the rise of anime (animated cartoons) in Japan and the impact of video games on cosplayers worldwide. She illustrates these genres, by including some fantastic photographs and pictures from magazines on a wide range of characters. These colourful additions to the book also reinforce the fun nature of this activity.

Swinyard then looks at the theories which are consciously or unconsciously used when designing costumes. She describes how to create a fictional character in-depth. This in her deep analysis of how you can create and design a costume and she reflects on how using cosplay you can tribute the well known, Star Wars character, Luke Skywalker. She provides valuable information on internet sources that can assist you in designing costumes. In this section, she reinforces that cosplay is an activity that can encourage new creative skills such as embroidery, machine work and sewing activities.

Finally, Swinyard shares her valuable tips for the fledgling or seasoned cosplayer with tips on how to add to your costume. She has some fabulous insights into how you can accessorise a costume with props of all sorts such as makeup, wigs and prosthetics. She also adds that these final costumes are often shared within the cosplaying community through the use of photographs or video and often share the creative process.

Throughout this book, Swinyard supports her writing with over 130 fantastic photographs of some inspirational cosplayers in all manner of tributes. These photographs show the inclusivity of cosplayers as they show cosplayers in all shapes, sizes, genders and ages. Each cosplayer is featured in a variety of shots which beautifully demonstrate this cosplayer’s love for their craft in the creation of their chosen character. The use of such a wide range of cosplayers and costumes reinforces many of the themes which are prevalent throughout this book.

Swinyard’s exuberance of this subject is always present in her warm telling of this subject and in her detailed look at the history and practice of cosplay in relation to manga, anime and video games. Swinyard’s themes strengthen the idea that this is a fun hobby, an art and a creative hobby that can appeal to wherever your imagination takes you.

Just reading about this hobby, brought back fun childhood memories of dressing up as a princess, accessorising my outfit with a tin foil crown (and probably a glittery handbag) and then plastering make-up on my face. This book reignited my love of that childhood hobby. Now as an adult, perhaps the next time I go to a convention, it will be in a cosplay inspired costume. And that in doing that I can dress up as whoever I want, express my individuality with my level of creativity and know I’ll not be judged. And know, in the words of that well known Frank Sinatra song,

I enjoyed this book! I'm already pretty familiar with cosplaying and the community, but I learned a few things while reading. This is a great read for anyone new or wherever you are in your cosplaying journey.

An excellent introductory guide. Has a fantastic opening section all about the History of Gaming Cosplay including some great pictures based on early cons- It's fascinating to see the differences between some early conventions and something like LFCC or San Diego Comic-Con.
The photo images are both high quality and show a wide variety of body shapes and sizes. This is a great change as many older cosplay books only show 'modelesque' or sexy cosplayers. In this one you have fuller-figured characters and many different skin tones which shows how cosplay is all-inclusive... All in all, a very useful book with enough variety to give you ideas and help you take your first steps into Cosplay.

A cosplayer and lover of all things “geek” since they were 15, Holly Rose Swinyard is now a pop culture journalist and editor, running the cosplay magazine, The Cosplay Journal. They have also written on cosplay, pop culture and the need for “escapist play for adults” for national publications and on BBC Radio 4. It would be a shock to find them any where but their sewing machine, or scrawling notes for the next exciting project.