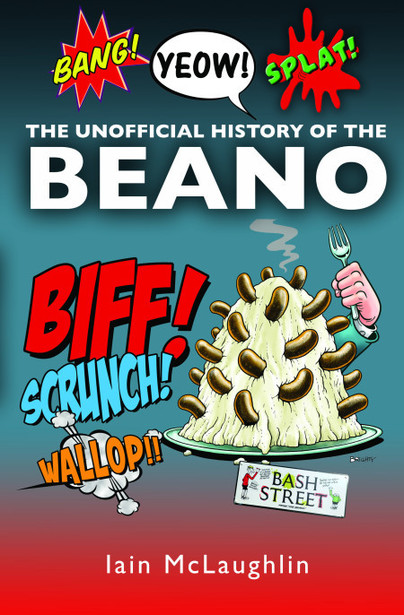 The Unofficial History of the Beano (Hardback)

Add to Basket
Add to Wishlist
You'll be £19.99 closer to your next £10.00 credit when you purchase The Unofficial History of the Beano. What's this?
+£4.50 UK Delivery or free UK delivery if order is over £35
(click here for international delivery rates)

The Beano is Britain's longest-running and best-loved comic. Since 1938 it has brought thrills and laughter to generation after generation of children, seeing the young and young-at-heart through World War 2, the social changes of the 1950s and 60s and on into a new millennium. How has the comic evolved since its early days? How many of the classic characters and their stories do you remember? What are the important changes that have happened through the years, why have they happened and why has The Beano survived when all the other comics have folded? Every child in the UK since the 1950s has known Dennis the Menace, the Bash Street Kids, Minnie the Minx and Roger the Dodger, but how many know the writers and artists who created these iconic comic characters? How do they write the scripts week after week? Where did the inspiration come from? How did the artists come to work for this Great British institution? This is the story of the Beano Comic, told in the words of the people who made it, going back to the dark, harsh days of the 1930s and continuing through to the present day. A unique insight into the country’s most beloved comic.

I was really looking forward to reviewing this book as I was a big Beano fan as a kid popping down to the shops with my pocket money for a copy of the Beano and some sweets on a Saturday. My favourites were Billy Whizz, Ball Boy, Dennis the Menace and the Bash Street Kids It was nice to hear about all the goings-on in the background, hearing about the ideas and plans that revolved around various characters and what created the inspiration. Hearing about how the cartoons and scripts were written and how some of the cartoons have been drawn for many years by the same artists. It was a really good behind the scenes look at the Beano. All we could do with now is a book about my other favourite cartoon as a kid, Oor Wullie. I would happily recommend this book as it takes you back in time to being a big kid.

Having just read this title, I doubt very much if anyone knows more about the Beano than Iain McLaughlin, and I really felt that I was in the hands of an expert here. I didn't get the Beano or the Dandy myself, but that doesn't mean I didn't see it. My uncle took just about every weekly there was in the 1950s and the Beano was just one of the titles that came my way along with the American DC titles, together with Film Fun, Knockout, Buster and all the rest. I found some of the strips funny, but most of it paled in comparison with my Lion and Tiger comics. However, I always enjoy reading about the history of British comics and Iain's book certainly kept my interest. I would have liked to see an expanded central set of illustrations with examples of the many and varied comic strips contained in the Beano....

As featured in: 'Sketched Out'

'McLaughlin gives us a cracking look at a British institution that’s bound to bring back good memories for anyone reading.'

As a child fan who has since turned into an adult subscriber of the Beano, I really enjoyed this! The book includes much interesting back information about a comic that should be more widely seen as a British/international treasure. The history is very sympathetically described by a one-time Beano editor. While some controversies are briefly discussed they are spun into the upwards trajectory of changing social norms. I especially loved the descriptions of the various comic strips and office life, which were very vividly described. This style brought the reader close to the key protagonists creating a very enjoyable reading experience.

Iain McLaughlin’s Unofficial History of the Beano is 190+ page walkthrough of the Beano’s history, from DC Thomson’s desire for a rapid follow-up to the unexpected success of the Dandy’s launch in 1937 to tweaks made during the recent pandemic. McLaughlin shows how different the Dandy & Beano were to previous comics, e.g. by using speech bubbles inside the picture frames. The first editor, George Moonie, was in the job from the initial planning of the Beano in early 1938, when he was just 24, until 1983. Reading the book, one is impressed by how young the staff were when they started work for DC Thomson - R. D. Low, the Managing Editor of all of DC Thomson’s children’s publications was only 26 – and how long-serving many of them were.

McLaughlin tells us about the editors, cartoonists and writers who influenced the development of the comic; how the comic has changed; and the various characters that have appeared in the comic such as Lord Snooty, Desperate Dan and, of course, Denis the Menace. Dave Sutherland is still drawing the Bash Street Kids every week, more than sixty years since he drew his first page for the Beano.

If you have any interest in the Beano – and who didn’t read it during their childhood? – this is a book to enjoy. I like McLaughlin’s throwaway comments such as “Mysterious old hermits tend to appear quite regularly in old adventure stories but are rarely seen anywhere else, If you ever meet one, there is a good chance that you are in a comic strip.”

The Unofficial History of the Beano is a lovely nonfiction book and slice of comics history. One highlight of this book is how much research must have been done in order to complete this book. It's apparent from the wealth of information that the author really treasured The Beano.

The Unofficial History of The Beano, by Iain McLaughlin, is a wonderful peek behind the scenes of the UK's best loved children's comic.

Former Beano editor McLaughlin takes the reader on a journey from the Beano's beginnings back in 1938 right up to the present day, as it prepares to celebrate it's 85th anniversary in 2023. He covers all the big milestones in the Beano's history, the appearances and departures of both big and not-so-big name characters, the comic's role in keeping morale up during World War II, it's impact on popular culture in the UK and how it has changed over the years to meeting the developing tastes of each new generation of readers.

But what makes this book so enjoyable is the unparalleled access McLaughlin has to a host of personal interviews, anecdotes and reminiscences from Beano writers, artists and editors both past and present, having worked with many of them himself over the years. These add a great deal of insight, humour and warmth to the book, and allow the love the Beano's creators clearly have for the comic to come shining through.

This a British comic which most children have grown up with affection since just before the war and in my life was a weekly staple of my reading when a child and the annual each year as a Christmas present as it is based in Dundee. Enjoyed this look at the history of the comic as part of the DC Thomson publishing empire in Dundee as the comic started just before the war and progressed with so many characters we love today Dennis the menace, Lord Snooty, roger the dodger and minnie the minx.

The Beano has been a treasured stalwart of British culture for over 80 years, and Iain McLaughlin’s book is a splendid celebration of Britain’s longest-running comic. Furthermore, it is also relives the glory days of British comics with enthusiasm and depth.
The Beano’s importance as a morale-boosting publication despite paper shortages during the Second World War is analysed with the strips gloriously lampooning real-life figures such as Hitler and Mussolini and even the characters themselves doing their bit for Britain. The creation and development of all the major Beano characters such as Dennis the Menace, Roger the Dodger, Minnie the Minx and The Bash Street Kids is thoroughly examined. Thoroughly researched and full of interesting nuggets such as the fact that the first issue had ten pages devoted to text stories, and that the Bash Street Kids’ headmaster was modelled after the Beano’s editor. Biographies of the artists and writers who created the comic being these lesser-known figures to life, and the book includes quotes and anecdotes from them. Each decade of the Beano’s life is analysed right up to the present day where it continues to go thrive.
This is an unofficial history but the book is fully illustrated with photographs, and there is a full timeline and an index. This book is written with skill and knowledge, relating the whole Beano story from its birth right up to the present day. McLaughlin keeps the tone light throughout and writes with obvious affection for the comic, but this doesn’t detract from what is most definitely a work of scholarship. The book shows how the comic has survived the decades and adapted to the times while maintaining its core values of quality, fun stories and characters for everyone.

Get book takes you on journey of beano and the history.
Very well written and interesting.

I read 'The Beano' as a kid, so I was definitely interested to learn more about the comic's past. This book - which while 'unofficial', clearly enjoyed a lot of cooperation from Beano staff past and present - does a good job of outlining the successes and trials of the now 80-year old periodical.