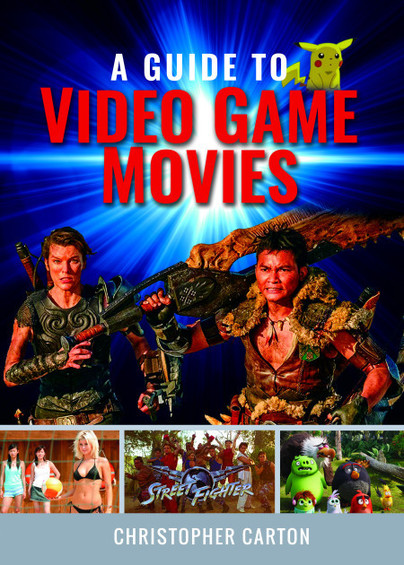 Add to Basket
Add to Wishlist
You'll be £24.00 closer to your next £10.00 credit when you purchase A Guide to Video Game Movies. What's this?
+£4.50 UK Delivery or free UK delivery if order is over £35
(click here for international delivery rates)

Have you ever wondered if that game you love was made into a movie? Flip this book open and find out!

Explore the fascinating journey of your favourite video games as they make their way to the silver screen! This comprehensive guide contains information on over forty big-screen adaptations of popular video games, including the histories of the series that inspired them.

Covering four decades of movies, readers can learn about some of the most infamous movies in video game history, with genres such as horror, martial arts, comedy and children’s animation ensuring there’s plenty of trivia and analysis to keep gamers hooked.

With nearly two-hundred full colour stills, posters and screenshots, the book is a go-to guide to discovering facts about some of the biggest box office hits and the most disappointing critical bombs in history.

From bizarre science fiction like Super Mario Bros. to the latest big budget releases like Monster Hunter, and dozens in between, A Guide to Video Game Movies should please film buffs and die-hard game fans alike. Whether you’re looking for rousing blockbuster action, family-friendly entertainment or a late-night B-movie to laugh at with your friends, you’re bound to find a movie to fit your taste.

Put down your controller and grab your popcorn!


Another superb book from P&S, this time about movies made that involve characters from favourite video games.

Within its 192 pages you'll find the most comprehensive history yet on these accursed adaptations, as Carton moves from films about video games - like 1982's Tron and 1989's Nintendo-fan-fiction stinker The Wizard - to the big-screen debuts of Mario and Luigi, Ryu and Ken, and the Lee brothers...

This is yet another quality release from White Owl, an imprint of the ever reliable Pen & Sword Books, and is a celebration of that much-maligned cinematic genre that deserves to get some love and attention. Chris Carton has proven to be the right person for that job!

This is a fun and cheerful romp through the catalogue of video game movies from "Super Mario Bros." to the current day... If you like video games and movies, and have an interest in the intersection between the two, this is well worth a look.

An excellent guide with a well written synopsis, complete with facts and fun information about this type of genre films. A great book for a burgeoning film lover, who wants to know more about these games, or for older people like myself who played the games, saw the movies, and like to know more. Very entertaining.

What’s what on the film of the game… Everything and anything about the wonder years of video games film spin-offs from the 1990s to now and beyond.

Proving wishes do come true – in December 2021 – I got an advance reader’s copy of Christopher Carton’s book A Guide to Video Game Movies (2022) in exchange for an honest review. This was read just in time for Santa’s Christmas shop. As I am the stepmum to a pair of retro-loving gamer boys teens who have seen every superhero movie and are now into video games and their movies, this was the book of Santa’s dreams. After reading it, I dutifully added a sledge load of video-themed films to my stepdudes’ Christmas watch list in my role as Santa’s little helper.

Just seeing the fabulous cover and title of this book, I was thrilled with the idea of stunning my stepdudes after I regaled them – and their dad, my Darlin Husband – with my then new found knowledge. With Carton’s book as a guide, I could not only quote the film or the game but tell all those behind their scenes stories, mention the memorable taglines and throw in random starry acting names from this genre and much, much more.

Carton’s family love for these video games and this film genre also appears to be a genetic one. I identified with him completely in his heartwarming dedication to those family members. He thanks his parents who introduced him to video games and movies, his siblings for their reminiscences of their early joint experiences and you feel his love for his wife and kids just for being them.

I was a 1970s kid who was always into films as seen HERE. Then I really got into video games after my parents bought the family a ZX81 in the early 1980s when I was a pre-teen. My joy of video games has lasted over the decades. It even included having some odd dreams after seeing a certain video game and the films that included Harrison Ford. In those dreams, I heard the Indiana Jones film theme and dreamt in yellow blocks in what seemed like an infinite loop.

The introduction to this book was a joy to read. Carton remembers those early arcade games I was hooked on like Space Invaders and Donkey Kong. Then he writes about the innovative and inspiring film, TRON (1982). Admittedly – before reading this book – TRON was one where Jeff Bridges character’s motivations went over my head, and later was one watched solely for this actor. And for the first time, I understood it!

Other films were mentioned including the much loved WarGames (1983) and The Last Star Fighter (1984). Both of these 1980s films were keenly watched and then retroactively adored by my stepdudes. Carton then convinced me to watch The Wizard (1989) with The Wonder Years (1989-93) then child actor, Fred Savage. I mentally added this movie to my to watch and review list.

The contents page has pastel colour-coded sections for each of those decades from the 1990s to the present day. These colours are then replicated in then the same but brighter colour versions in the individual sections and their chapters for that decade. Chapters include animated films such as the Angry Birds movies and live-action ones including the Mortal Kombat films and reboots.

Carton writes about a large number of films in a variety of video games genres such as horror, adventure and arcade. These are all analysed in meticulous detail as he travels through the different decades. Each section is then divided into separate chapters outlining a number of titles for video games and their film counterparts.

Each chapter begins with a fabulous colour picture of the film poster. These along with those fabulous film taglines such as Super Mario Bros (1993) proclaiming “This Ain’t No Game“. Carton adds enticing pictures of both the movie and from the game it tributes. Pictures are well chosen and added lovingly to the book. A small panel outlines the date of release, stars and director.

In this fabulously chosen selection of films – and games – I read about those I’d seen such as Angelina Jolie’s Tomb Raider films and those I hadn’t including Sonic the Hedgehog (2020). This latter one was one I now desperately wanted to see – and play – after reading Carton’s book description.

Carton helpfully adds other films film’s cast members appeared in, and this was a joy for this film blogger. The book is not about those games which were inspired by films such as The Lego Batman Movie (2017), The Smurfs, the Indiana Jones franchise and those Lord of the Rings films. But I am hoping there will be a sequel to this book.

There were also surprising entries for those films I didn’t know were originally video games including In the Name of the King: A Dungeon Siege Tale (2007). The films boasted some incredible cast lists. These included Ben Kingsley, Radha Mitchell, Christian Slater and the bromance themed Doom (2005) with The Rock and Karl Urban. Chapters end with his reasons to Watch It For and information on Sequels in two subheadings.

Each section ends with a sum-up of the decade in a Best of the Rest section. I loved Carton’s writing style fusing warm and humorous descriptions of games and films. There are so many fun ones to choose from. But to give you my favourite example of a Watch It For, describing Robert Patrick’s bad guy in the film Double Dragon (1994), that is a sterling comic example;

Robert Patrick is as ludicrously cartoonish as a villain can be and his performance in this movie – a far cry from his menacing T-1000 in Terminator 2: Judgment Day (1992) – is worth your time alone.

Chris Carton was born into a family of movie and game lovers. He cut his teeth on Commodore 64 platformers and Amiga point-and-click adventures like the Monkey Island series and has loved video games ever since. He’s also obsessed with cinema and movies of all genres.

Chris was born in Galway but now lives in Cork, Ireland, with his wife and three kids, who he has bestowed his gaming passion upon!