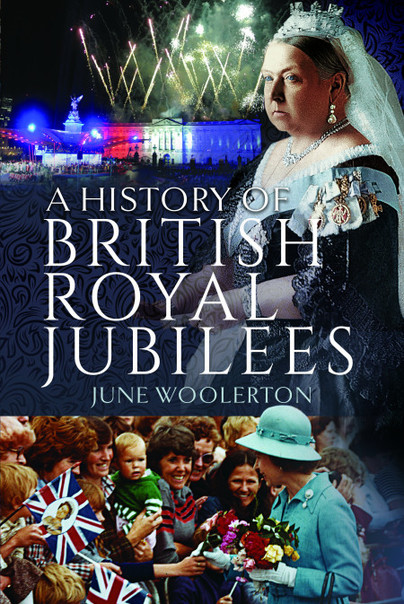 Add to Basket
Add to Wishlist
You'll be £12.79 closer to your next £10.00 credit when you purchase A History of British Royal Jubilees. What's this?
+£4.50 UK Delivery or free UK delivery if order is over £40
(click here for international delivery rates)

As Queen Elizabeth II became the only British Monarch to rule for seventy years, she marked the historic moment with a simple message, promising to continue her lifetime of service. But while her Jubilee day was quiet, it was merely the start of a year long celebration that would see millions around the world join the royal party.

Jubilees have become regular events in The Queen’s long reign but they are a relatively modern idea which only really took hold in the reign of King George III. Initially rejected by many as a frivolity, the first royal Jubilee became a huge success. It was a beguiling mix of pageantry, religious devotion and popular celebrations including street parties that has been copied in the Jubilees that followed.

Queen Victoria enjoyed two successful celebrations, including Britain's first Diamond Jubilee, which helped re-establish her popularity and consolidate the Monarchy. King George V turned to the joy of a Jubilee to re-invigorate his country as it recovered from war and economic woes. In the reign of his granddaughter, Elizabeth II, Jubilees have been transformed into modern media events celebrated globally.

In A History of British Royal Jubilees, we trace the ever evolving story of these popular celebrations, bringing each of them to life and looking at how they changed the image of royalty and the country itself. This is the story of how Jubilee celebrations have become vital to the success of Britain’s Royal Family and to its place at the heart of a nation.

A nice piece of history and certainly for the royal fans also nice memories of the various anniversaries of Queen Elizabeth II.

I have been on a history kick recently so this book was everything and more!

Very interesting book, for all types of people those who are royalist to those who can take it or leave it
It's historical and well written.

As a citizen of a Commonwealth country, this year was special because of the Queen's Platinum Jubilee. I have always enjoyed reading about the British Royal family and the history of the British Monarchy, but I had forgotten how much I enjoyed reading about it, until this year with the 70th Platinum Jubilee. So, when I saw that there was a book literally called "A History of British Royal Jubilees", I was absolutely thrilled.

Woolerton first gives us an in-depth but concise analysis of the origins of Royal "Jubilees" and how they made their way over to England. After reading that first chapter, even if you weren't familiar with jubilees/big royal celebrations, you will have a clear understanding moving forward in the book. What I really appreciated was the Monarch that Woolerton chose to be our "starting point". Basically, Woolerton doesn't give us unnecessary details with early British Monarchs; instead, Woolerton gives us Queen Victoria as our initial Monarch of analysis, which was helpful because I don't have much knowledge on the Monarchs previous to her, so I wasn't bored with any of the details.

This book does an excellent job at including intimate details on what the Jubilee meant not only in relation to the serving Monarch, but to the citizens/countries who were/are members of the Commonwealth. I think my favourite one to learn about was King George V:
"At the close of this memorable day, I must speak to my people everywhere. Yet, how can I express what is in my heart?" (Woolerton re. King George V, page 74).

I highly recommend this book to anyone interested in British history and British Royalty!

Queen Elizabeth II's Platinum Jubilee celebration has recently concluded, and it is the 2nd of her jubilees that I have viewed. That is why this book, "A History of British Jubilees", is so timely. It gives a detailed history of jubilee celebrations in Britain starting with the reign of King George III and continuing on to the current monarch. Woolerton provides not just the details of the royal jubilees, but also the history behind the concept of a jubilee, which I never knew even with all the reading I've done. There is also information on how the citizens of the realm celebrate, and the importance of using the jubilees to show the royal family as being in touch with the people. It's a very informative, sometimes humorous, book and gives insight into all the behind the scenes work that goes into celebrating the monarch.

I enjoyed watching the Jubilee celebration this year, so this was a welcome read. It was interesting to learn about what was done for similar events in the past. This will likely be of interest to those who love all things British!

I read this over Jubilee weekend, which I found to be a fitting time to read such a fascinating book. I can't recall ever coming across a history book focused just on a history of the British Jubilee celebrations, so the author automatically gets points in my book for a concept that seems so obvious, and yet is so original.

A History of British Royal Jubilees is a wonderful written history for lovers of the Royal Family. After having just watched Queen Elizabeth II Platinum Jubilee, I was excited to read about the prior Jubilees held for the past monarchs. This book shows how beloved the celebrated monarchs were and are to the people of the Commonwealth with the many celebrations held in their honor. I was especially pleased to read this book included this year's Platinum Jubilee. There were many details that I had not seen or read about, so it was extra special to see them included.

This is a special book of memories full of love for the monarchs whose duty it is to serve the people.

This is an in-depth history of the Jubilee celebrations of the British monarchy, including the most recent Platinum Jubilee of Elizabeth II. The author includes often overlooked details of past celebrations. If you are as fascinated by the Royal Family as I am, you will enjoy this book.

I enjoyed reading this one about Royal Jubilees as Queen Elizabeth celebrates her 70 years on the throne. This book does talk about Queen Victoria who had two jubilees one of which was Britain's first Diamond one. And how it's being going on since George III so it's "a modern thing".

June Woolerton's book reminds us of British Royal Jubilees past. There actually haven't been as many as you might think. Half of them have, in fact, occurred under the present Queen (in 1977, 2002, 2012 and now 2022).
The first was George III's Golden Jubilee in 1810. Although not the first king to reach the fifty year mark, he was the first to celebrate it properly, despite his poor heath. He died in January 1820, around nine months before his reign reached the sixty year milestone.
Although the term 'jubilee'' was originally only intended to apply to 50th anniversaries, George's granddaughter, Queen Victoria celebrated her Golden and Diamond Jubilees in 1887 and 1897. Her own grandson, George V celebrated his Silver Jubilee in 1935. He died a few months later.
June Woolerton's book fills in the gaps on these occasional traditional Royal celebrations.

June Woolerton is an author and journalist who’s spent twenty years reporting on and writing about royalty and royal history. She’s the editor of a major royal website and has written extensively for magazines and publications on history’s most famous monarchies and rulers as well as presenting podcasts and radio shows on royalty. After graduating in history, she enjoyed a broadcasting career before moving into print and obtaining a degree in psychology. She lives near London with her husband and son.