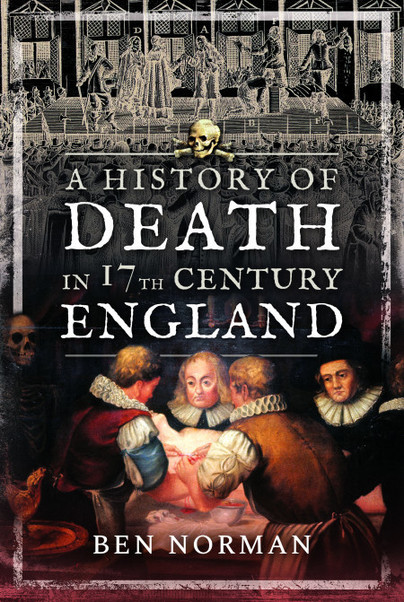 A History of Death in 17th Century England (Paperback)

You'll be £10.39 closer to your next £10.00 credit when you purchase A History of Death in 17th Century England. What's this?
+£4.50 UK Delivery or free UK delivery if order is over £35
(click here for international delivery rates)

Death was a constant presence in the lives of the rich and poor alike in seventeenth-century England, being much more visible in everyday existence than it is today. It is a highly important and surprisingly captivating part of the epic story of England during the turbulent years of the 1600s. This book guides readers through the subject using a chronological approach, as would have been experienced by those living in the country at the time, beginning with the myriad causes of death, including disease, war, and capital punishment, and finishing with an exploration of posthumous commemoration. Although contemporaries of the seventeenth century did not fully realise it, when it came to the confrontation of mortality they were living in wildly changing times.

The book has clearly been written by someone who knows their stuff and it is a well written book, not heavy and not too light. In fact it is very interesting in numerous places. In fact I probably started reading this book thinking it would be a bit more grisly than it was and it actually showed in places how it was around the seventeenth century we started see in the traditions and ways that we have today. There is a very good bibliography at the back of the book with a good number of books on the subject matter, certainly if you want to take your study further. This is very good book written by the author Ben Norman, it was a book well worth reading and one that I would recommend to others interested in the subject matter. Another 5 star book from me.

Perhaps this is not the most joyous book to read in the midst of a global pandemic but it certainly does show humans have been through some dark things before... and will probably be through some dark things in the future. It does put it into perspective. It also shows, particularly in the chapter about plague and sickness in general how much we have learned and how similar some of the blights are to our present circumstances.

It has an interesting slant as it describes that century as early modern. In other words it was transitional from some of the older ways of thinking and moving towards some of our more current thinking. We might, however, be excused for considering some things still rather barbaric particularly in crime and punishment. Or we might also muse that mankind has not come terribly far at all.

It is a fascinating read, chock full of details and information. It might be something the reader could approach in one fell swoop or it might be something that is consumed in more bite sized chunks as each chapter is a meal that is neither too little or too much. Four purrs and two paws up.

A very interesting read, especially in the wake of the current pandemic. It was interesting to read about how differently and similarly death was treated in the early modern times and how things have changed or remained the same now.

I really enjoy histories that focus in on very specific topics and A History of Death in 17th Century England did not disappoint. Norman has written an in-depth, readable, and very interesting history of death, burial, and remembrance in the 1600's.

There is good use of primary source material that allows the reader feel connected to people who lived over 400 years ago. The illustrations included are well-chosen and added to my understanding. I also really appreciated the extensive bibliography and helpful index.

I found especially interesting the description of the funeral of Elizabeth I (including the preparations for and procession to), the chapter on unconventional burials (which includes the story of the man who dug his own grave), and descriptions of remembrance bequests (specifically deaths head rings).

From executions to final rites to common v. royal funerals. It just goes over everything that you might (or might not) want to know about this era and how death was handled/viewed. I found it to be an interesting book! It had a lot of information, lots of which I wasn't as familiar with.

If you want a reason to be grateful for living in this century--yes, even during the disaster that is 2020, then perhaps you should read this book. There are a lot of things about the 17th century that were less than pleasant, and unsurprisingly, death and burial customs were a few of them that really stand out. The author did a good job of depicting this for the reader, although you might not want to eat whilst reading this book. Some of it is rather brutally honest.

I completed my dissertation at university on death on the early modern stage, so this is a topic I have some knowledge of. The book is well researched, well written and interesting, and it does present the reader with a thorough history of death in the C17, from the different types of death through to burials, funerals and memorials. I feel the book is able to very skilfully, bridge the divide between a book that gives an accessible account of its subject for the general reader, whilst providing a useful research for research purposes, I certainly wish it had been available when I wrote my dissertation.

First I would like to say thank you to Ben Norman, Netgalley, and Pen & Sword History for allowing me to review this title.

This book is a thoroughly researched examination of death and the rituals that surround it from the death of Queen Elizabeth I in 1603, to Queen Mary’s funeral in 1695.
Norman takes the reader on a step by step journey from causes of death (and how this changed over the centuries), preparation for burial, funeral practices, interment, remembrances, and how the practices of this century set the standard for centuries to come.
Norman also includes several clear, and wonderful images to show the reader just what he is describing.

I highly recommend this book, both for those who have an interest in this subject and for those who are researching this specific topic. Again, thank you for allowing me to review this title.

This was a super fun book, which sounds so weird to say given the content, but it was FASCINATING. If you like reading about the royals of this era, this book dovetails nicely into all curiosities about everyday life in this time. Loved how it covered lots of different social-economic ways to die, and the causes behind them. Really great read, well-organized, just perfect.

An interesting exploration into Death, from natural causes or execution through to funeral practices.

I have a fascination with the history of death and funerary practices so I found this book to be a very interesting insight to the various causes of death and how the dead were treated in Stuart England. It’s a little basic but it does serve as a good starting point if you want to look deeper into the subject. It’s informative and well researched with lots of personal stories from people at the time. I know this isn’t going to be a book for everyone but if you do have any interest in the subject, it’s a very good read.

This book was much better than I thought it was going to be and kept my interest from start to finish. Death can seem like a morbid and depressing topic, and it happens to everyone eventually, but this book was not gloomy at all. The author talks about different forms of death in England's 1600's highlighting mostly common people. But what really peaked my interest, were the chapters on royalty. I like how the deaths were celebrated at the funerals.

If you like reading about British history and want to know a different aspect, this is the book to read. If you are a fan of Tudor dynasty, you might be disappointed because this book was after that. Overall, I enjoyed learning more about 17th century England and you could tell the author did a lot of research about the time period. Definitely recommended.

Very sistematic and concise presentation of history of the death in 17. century England.

The struggle for life started from the moment a baby was born. Deaths on childbirth for mother and child were common, Common death causes were also by diseases as smallpox f.i., plague and then criminal punishments, war, etc.
Death was ubiquitous part of life in 17. century.

Sweeping changes were affecting the rituals surrounding death, burial, and remembrance. People often soothed themselves that the dead beloved would soon be in "the land of rest, where there is no sickness but all perfection".

I highly recommend the book.

This is a short go-through of how death portrayed itself in the 17th century, each chapter highlighting a different aspect: illnesses, warring and so on. There's also some chapters specifically about the deaths of royalty and their funerals.

The most interesting thing about Norman's book is that the majority of the text is about normal people living (and dying). We get to know their names and their fates, which, so to speak, opens up history and shows us that people 400 years ago wasn't that unlike us now in the 21th century.

You would think that a book about death would be dreary but I found Norman's book an interesting read mostly due the above mentioned reason. The text is easy to read and follow along to, so no objections there.

I requested this title as I often read historical fiction and the 17th century is of particular interest to me. I wanted to expand my knowledge regarding the ways death was perceived in that period and reading this book proved to be interesting. Mr Norman presents how people met their deaths, rituals connected with the burials or the ways the dead were commemorated. One chapter is devoted to the royal funerals which took place in the 17th century and includes most fascinating information. The amount of research done into non-fiction is imposing as the author quotes contemporary accounts which are not difficult to follow.
The subject matter of this book is not joyful, however, it is full of facts that both curious and impressive.

Ben Norman grew up in South Cambridgeshire, in a 700-year-old farmhouse that was supposedly visited by Oliver Cromwell in the seventeenth century. He has always found the past a fascinating place, with a particular interest in the strange but familiar world of early modern England, and holds a master’s degree in Early Modern History from the University of York, for which he achieved a distinction. When not immersed in history Ben enjoys writing fiction, spending days doing absolutely nothing, and indulging in his favourite science fiction film franchise. He currently lives and works in York.