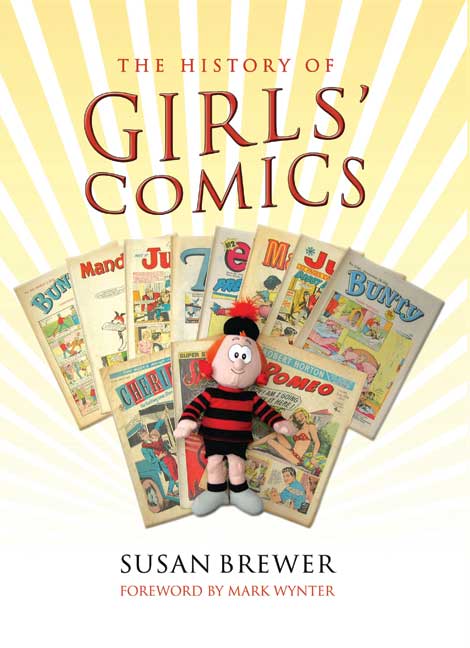 A History of Girls Comics (Hardback)

Add to Basket
Add to Wishlist
You'll be £19.99 closer to your next £10.00 credit when you purchase A History of Girls Comics. What's this?
+£4.50 UK Delivery or free UK delivery if order is over £40
(click here for international delivery rates)

Susan Brewer taps into the nostalgic women s market for comics from their childhood Jackie, Girl's Own, Bunty etc, from the early days in Victorian England to teen mags and TV-related comics, including Teletubbies and CBeebies. The book also covers partworks such as the highly collectable Vicky and other collectables, including annuals, covermounts and giveaways and toys and games tie-ins, including board games.

From the author of Collecting Classic Girls' Toys comes this instalment, which thoughtfully explains the changes that comics have undergone over the years. From pre and post-war, through the varying topics of their time in the 50s to the 80s, to today's modern day alternatives; this book encapsulates a wealth of knowledge surrounding the numerous types of comic that were, and are, available to girls. Subjects covered include early comics, nursery comics, pop comics, annuals, and even the free gifts which now so often accompany more recent issues; and in addition, titles such as Girl, Bunty, Twinkle, and Mandy all get a mention. This book is a real treat for its nostalgic property, and an intriguing read for those with a specific interest in comic books.

Being interested in the history of Britain's comics I approached this title with a degree of apprehension; fearing I would be faced with another compendium of strips designed to elicit a nostalgic sigh from it's reader. I need not have worried. Susan Brewer's History of Girl's Comics represents an accessible yet detailed guide to the evolution of the medium from it's origins in the late 19th century through to it's modern incarnations. Brewer explores in depth the changing attitudes and values of these times, and how this was reflected in the content of comics; the modern celebrity and fashion obsessed comics a far cry from the moralistic, predominantly boarding school based tales of the first half of the 20th century. While charting the changing nature of both the medium and the outlook and expectations of it's audience, Brewer also cites that some things have not changed, drawing upon agony aunt columns to illustrate that some concerns remain a constant. The book also looks at the broader phenomenon of girl's comics, including marketing, free gifts, toys and collectibles. Whether you're looking for a trip down memory lane or simply curious about the history of comics aimed at girls, this book is guaranteed to satisfy.

When thinking of comics i never realised just how broad of a genre it is. This insightful delve into the history of the girls' comic does one of two things, firstly it gives the younger reader an understanding as to how long the genre has been around and also gives the chance for a younger reader to look back on how they were designed and marketed. Secondly this book gives an older reader a chance of nostalgia, to look back with fond memories and perhaps recapture some of their youth in doing so. Another thing to shock me is the amount of different types of girls comics that were, and that still are available, i didn't realise that the market for girls comics was so vast. it is interesting to see however how the comics themselves have changed, which is something that this book encapsulates brilliantly. The fundamentals of the comic have remained the same but the designs have adapted to a modern world, along with the content. For instance the advice sections in magazines have become more open, meaning certain topics of discussion have become accepted whereas before they would have been shunned. Brewer provides a feel good book that can be enjoyed by all and shows a slice of Britain's history in its own personal way.

"The History of Girls' Comics" is the fascinating insight to girls' comics from the 1880s to the present day. It is sure to induce many nostalgic memories from women of all ages.

For many, a comic was a rare treat as a child. They were special, not just because of their colourful layouts, amusing cartoons, exciting stories and the occasional free gift, but because they were a weekly delight. As an infant one could read Jack and Jill or Robin, and growing up there was Girl, Bunty, Mandy and Twinkle. The becoming a teen there were the more racier titles such as Romeo and Boyfriend.

Recently there has been a craze for old comics as many are collectable and valuable. This book looks at the different comics throughout time, how comics differed from tots to teens and how attitudes and aspirations of girls have changed over the years.

Susan Brewer taps into the nostalgic women's market for comics from their childhood: Jackie, Girl's Own, Bunty etc, from the early days in Victorian England to teen mags and TV-related comics, including Teletubbies and CBeebies. The book also covers partworks such as the highly collectable Vicky and others, including annuals, covermounts and giveaways, toys and games tie-ins, including board games. Both collectable and nostalgic, this will appeal to the late twenty-fifties market, featuring as it does the Golden Age of Comics dating from the 1950-70s and, whilst there has been plenty on boys' comics with their superheroes and action men, the girls' market has been surprisingly neglected but is itself highly collectable. Susan Brewer is an expert in toys and children's collectables..This has to be the finest treatise on Girls' comics I have ever read. Susan Brewer clearly knows her subject well, and draws on her own personal experiences of reading and collecting comics during her childhood. It is comprehensive, perfectly researched, and a joy to read, with extensive, beautiful illustrations. I can't fault it, and it's a book I shall dip into regularly to remind me of times gone by. There is an eloquent introduction by singer Mark Wynter, who joins my list of celebrities who appreciate those fantastic stories written for girls and which appeared each week in School Friend, Girls Crystal and Bunty. This is fascinating stuff, and should win awards, it's so good, so readable. A true slice of nostalgia, lovingly crafted by PEN AND SWORD. Don't hesitate, it's terrific!