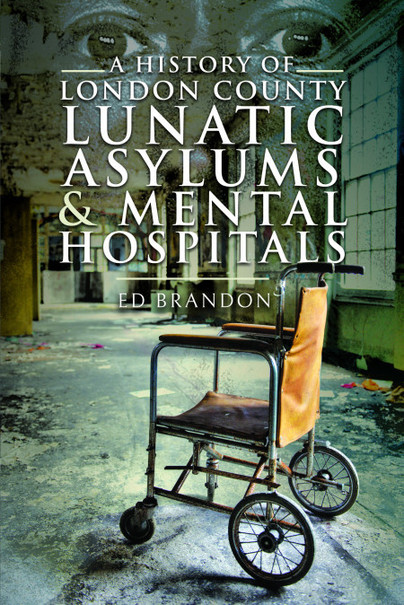 Preorder
Add to Wishlist
You'll be £11.99 closer to your next £10.00 credit when you purchase A History of London County Lunatic Asylums & Mental Hospitals. What's this?
+£4.50 UK Delivery or free UK delivery if order is over £35
(click here for international delivery rates)

From the Middle-Ages onwards, London’s notorious Bedlam lunatic hospital saw the city’s ‘mad’ locked away in dank cells, neglected and abused and without any real cure and little comfort. The unprecedented growth of the metropolis after the Industrial Revolution saw a perceived ‘epidemic’ of madness take hold, with ‘county asylums’ seen by those in power as the most humane or cost-effective way to offer the mass confinement and treatment believed necessary.

The county of Middlesex – to which London once belonged – would build and open three huge county asylums from 1831, and when London became its own county in 1889 it would adopt all three and go on to build or run another eight such immense institutions. Each operated much like a self-contained town; home to thousands and often incorporating its own railway, laundries, farms, gardens, kitchens, ballroom, sports pitches, surgeries, wards, cells, chapel, mortuary, and more, in order to ensure the patients never needed to leave the asylum’s grounds.

Between them, at their peak London’s eleven county asylums were home to around 25,000 patients and thousands more staff, and dominated the physical landscape as well as the public imagination from the 1830s right up to the 1990s. Several gained a legacy which lasted even beyond their closure, as their hulking, abandoned forms sat in overgrown sites around London, refusing to be forgotten and continuing to attract the attention of those with both curious and nefarious motives.

Hanwell (St Bernard’s), Colney Hatch (Friern), Banstead, Cane Hill, Claybury, Bexley, Manor, Horton, St Ebba’s, Long Grove, and West Park went from being known as ‘county lunatic asylums’ to ‘mental hospitals’ and beyond. Reflecting on both the positive and negative aspects of their long and storied histories from their planning and construction to the treatments and regimes adopted at each, the lives of patients and staff through to their use during wartime, and the modernisation and changes of the 20th century, this book documents their stories from their opening up to their eventual closure, abandonment, redevelopment, or destruction.

Ed Brandon has been researching, studying, and writing about the former lunatic asylums and mental hospitals since first being asked to provide an image of one for a book in 2008. He has now visited around eighty such institutions across Europe, with his work featured in exhibitions, galleries, books, magazines, and online articles.

He has worked with Mencap, Bethlem Museum of the Mind, West London & Thames Mental Health Trust, Aneurin Bevan Health Board, Norfolk & Suffolk NHS Trust, Peterborough NHS Trust, and North East London Foundation Trust to create documents of their buildings after closure, and assisted numerous museums, galleries, local history groups, students, and others with information regarding the former asylums. He is also a contributor to countyasylums.co.uk and some examples of his photography can be found on www.facebook.com/ASOMUE

This is his first solo book detailing the history of some of these most complex, intriguing, and mythologised of building types.