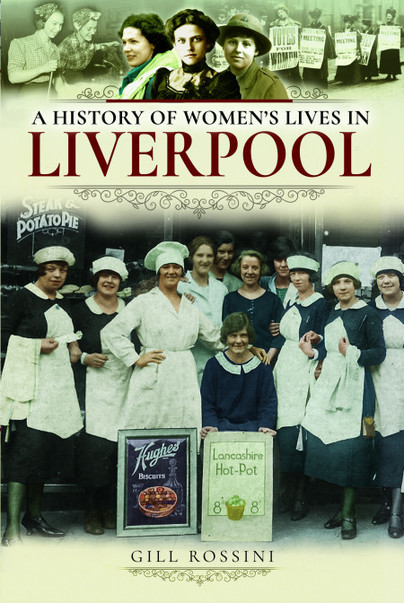 A History of Women's Lives in Liverpool (Paperback)

Add to Basket
Add to Wishlist
You'll be £8.99 closer to your next £10.00 credit when you purchase A History of Women's Lives in Liverpool. What's this?
+£4.50 UK Delivery or free UK delivery if order is over £35
(click here for international delivery rates)

The story of Liverpool’s women is one of diversity and contrast. This iconic port has welcomed countless nationalities over the centuries, both as residents and passing migrants; it has experienced both great prosperity, and crushing poverty. Liverpool’s women have lived in unhealthy court dwellings, and comfortable suburbs; helped each other, educated each other, and stood together against common adversaries such as poor living conditions, and enemies in wartime; they have lived, loved, worked, fought, laughed, wept, worshipped, and survived in their own unique way.

Containing rarely seen illustrations, this book will take you on an adventure through 100 years of Liverpool’s history, with a focus on its courageous, hospitable, caring, intelligent and adventurous women. In this honest account, you will meet women from all walks of life, be they politician, home maker, impoverished migrant, the ladies from the ‘big house’, preacher at a chapel, teacher, prostitute, activist, prisoner, and more. Some of them you may have heard of, such as ‘Battling Bessie’ Braddock MP, suffragette Jeannie Mole; many are the forgotten women of history you will encounter for the first time. All of them in their own way make up the kaleidoscope of women’s history in this great city.

Article: 'Pargie's role in war effort is marked in new book' as featured by

Now, this is a book about all aspects of women's lives, now which city is going to have more stories and more about women, other than say London, it has to be Liverpool. With a rich history dating back hundreds of years, whether it be about working, school, health, being at home, sports, music and entertainment, this book is packed.

Now I particularly enjoyed the chapters about women's work in Liverpool because you've got so much industry and trade going in and out of Liverpool you can't help but have a wide variety of working life such as factories and the docks etc. When you think about it, the vast majority of the work other than the heavy-duty work could have and was done by women from the factory floor to the servant's maid floor. People always admire Liverpool people for being 'salt of the earth' characters and being down to earth. This comes across in the book and in my opinion, it's a very good book that I would be happy to recommend, as the book has clearly been very well researched and written.

This wonderful book by Gill Rossini showcases the extraordinary roles various women both famous and unknown have played in making the city the wonderfully diverse place it is today. Over a hundred years of history are encased in this book, which includes many never before seen photographs and stories. One of the greatest cities in the world, and this book celebrates it in grand style!