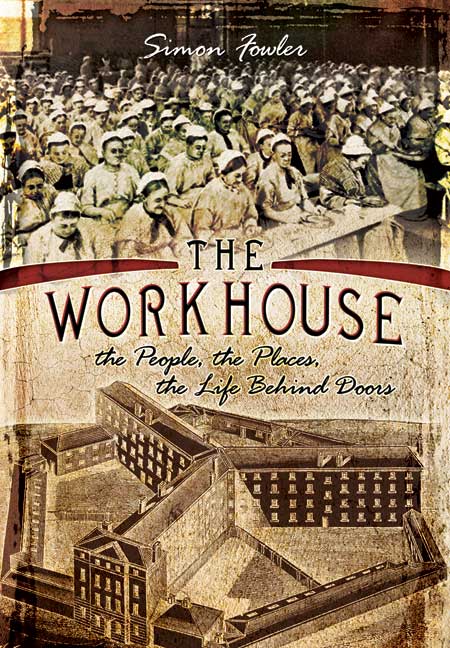 The People, The Places, The Life Behind Doors

Click here for help on how to download our eBooks
Add to Basket
Add to Wishlist
You'll be £4.99 closer to your next £10.00 credit when you purchase The Workhouse. What's this?
Need a currency converter? Check XE.com for live rates

During the nineteenth century the workhouse cast a shadow over the lives of the poor. The destitute and the desperate sought refuge within its forbidding walls. And it was an ever-present threat if poor families failed to look after themselves properly. As a result a grim mythology has grown up about the horrors of the 'house' and the mistreatment meted out to the innocent pauper.

In this fully-updated and revised edition of his bestselling book, Simon Fowler takes a fresh look at the workhouse and the people who sought help from it. He looks at how the system of the Poor Law – of which the workhouse was a key part – was organised and the men and women who ran the workhouses or were employed to care for the inmates.

But above all this is the moving story of the tens of thousands of children, men, women and the elderly who were forced to endure grim conditions to survive in an unfeeling world.

'A poignant account ... draws powerfully on letters from The National Archives ... [Simon Fowler] brings out the horror, but it is fair-minded to those struggling to be humane within an inhumane system,' The Independent

'A good introduction,' The Guardian.

The history of workhouses and poverty ('misery history') has recently been prominently covered on TV shows like WDYTYA? and ITV's Secrets from the Workhouse, and referenced in historical dramas like The Village and Ripper Street.

A fascinating and well-researched book into the truly dreadful institutions known as Workhouses. I cannot imagine the desperation of many of the inmates to allow themselves to be subjected to incredible humiliation, abuse, and squalor, rather than starve on the streets.

I really enjoyed reading this book. I learn alot about what is was like living in a work house. This book was well researched and packed with information and descriptions of workhouse that were even local to me which amazed me. At the end there is a very useful guide on how to look up if your ancestors were ever in a work house.

I'd like to say that I enjoyed this book, that is far too cheerful a word. Equal parts heartbreaking and fascinating, it was a very worthwhile read, and I appreciated the way that the individual stories augmented the history.

In the nineteenth century, if you were poor, had given birth to an illegitimate child, or were unable to take care of yourself, you could be placed in a workhouse or voluntarily go there. It was not a pleasant place to be. Corruption ran rampant among the wardens and people in charge of the inmates. They would siphon off funds and even food or clothing meant for the most destitute of the population and sell off the products so that they would be able to live a gluttonous life or in order to leave tidy sums to leave to their heirs when they passed on.

The inmates toiled for ten hours a day for a few crumbs and no creature comforts. They were abused, beaten, molested, and otherwise humiliated.

It is good to read about the horrors of these poor people's experiences so that these are remembered and never allowed to occur again.

Everything you wanted to know about Workhouses is IN this book. The author has done a phenomenal job researching everything. From the designs throughout the years, to the hiring practices, reform acts, clothing, "jobs", food rations and menus to the very people who lived there and more.

It is a very comprehensive look at that time period and it is broken down in to a wonderful format of main chapters and subchapters within. At the end of the book there are some great pictures and illustrations.

All your questions will be answered after you read this book! Get it now!

This was an excellent introduction to the topic - I knew a little bit about it but didn't realise the nuances between various workhouses, and how they evolved over time. It also brings to life the different experiences of the people who would have lived there - the children and the able-bodied, who would have had a particularly difficult experience, but also the elderly and the sick who might actually get some comfort (not always!) and care. It also highlights the testimonials from former housemates through memoirs and letters - including young Charlie Chaplin who spent some time as a child in Lambeth Workhouse.
It was well-written and easy to follow. Really enjoyed it.

I eagerly look forward to any new Pen and Sword publications as I know how beneficial they have been to my family history research. I’ve found previous books and articles by Simon Fowler very useful.
Even as someone who has been compiling their family tree for a while now I seem to find something of use in every new publication .This subject is of particular interest to me . Several of my ancestors had, unfortunately , reason to be in the workhouse at points in their lives . I also have family members who were master and governesses in the workhouse. This book was so useful to get an insight into both sides of the system .
A very interesting and informative read which I’m sure will continue to be of use when I’m looking into the lives of my ancestors.

A fascinating and very comprehensive insight into what Workhouses were like to live or work in and the circumstances in which you were admitted.
Poignant, sad and heartbreaking in places but a very honest assessment and I feel I learned a great deal. Raises a lot of questions about welfare and how the poor were treated in the past and how much variation there was.
I was particularly interested in the insights into Southwell Workhouse as I grew up in a village just six miles from there and was aware of the building and it’s existence.
All key areas are covered with lots of examples and quotes and some very interesting pictures and contemporary sources.
Definitely a recommended read.

Written by Dr. Simon Fowler, it's a meticulously researched, layman accessible academic treatise on the realities surrounding the establishment and administration of poor/work houses as one practical arm of the Poor Law. The book is laid out in a logical manner, with historical realities and day-to-day life of the inhabitants of workhouses followed by individual topic chapters including the working poor, different class divisions of the poor, destitute children, the sick and infirm, and modern workhouse museums and exhibitions. A cross-referenced index makes specific information easy to find quickly. The appendices are packed with good information on how to winnow information from historical sources for family genealogy research, as well as modern day workhouse museums/exhibits to visit. The bibliography is substantial and will provide many hours of further reading.

In Victorian England, the desperately poor had the choice...seek charity or seek refuse as "indoor paupers" at the workhouse. The latter was the absolute last resort and were at times described as worse than prison due to treatment, forced mindless labour such as oakum picking, the bare minimum amount of (terrible) food and unsanitary conditions. The author describes bleak "life" in the workhouse from first arriving to being segregated into groups to being bathed and clothed (usually dreadful clothing) to sleeping on the floor in cold and poorly-ventilated rooms to choking down grease/onion "soup". Not only that but inmates were privy to beatings and sometimes starvation. Disease and vermin were common.

That the book describes the New Poor Law in detail and those who implemented laws and the workhouse employees, especially those chosen (preferably married couples) as masters and matrons who were poorly paid and sometimes cruel and harsh is fascinating. Of course some workhouses were better than others but the innocent paupers were punished for being poor. One instance of a father taking a suet pudding to his son and it being swiped from his hand by an employee at the last second is heartbreaking. Vegetable plots were common but unfortunately not used at the workhouses themselves! It is no wonder that the temptation to bribe and steal were so strong, though that met with punishment. Workhouses were built to reform and get people working but they had worse effects and most people (other than casuals) didn't ever leave, dying in them. The author describes the differences between "deserving" and undeserving poor and the levels of poverty within the walls. We also see how the children, old, infirm and mentally disabled were treated. The experiences of Charlie Chaplin, Jack London and Charles Dickens are referred to.

This is an intriguing book for any Nonfiction reader. Heartbreaking, of course. These were real people. Some reformers and advocates really did want to help...in the right way...but most viewed the poor as an illness or something to be avoided and they suffered as a consequence.

Author article on the workhouse employee as featured in

When you think of a 19th century workhouse, it's inevitable that Charles Dickens' Oliver Twist will spring to mind...Certainly, they weren't holiday camps and inmates were expected to do something towards their keep, but as Richmond author Simon Fowler argues convincingly, workhouses don't deserve the bad press they've been stuck with. For many paupers and desperately-in-need people, they were a safety net, without which many would have certainly starved. When viewed in the context of a welfare state where dwindling resources have to be matched to growing needs, the workhouse should be seen as a social policy tool that was probably ahead of its time.

Simon Fowler has written an excellent account of life in the workhouse. ... Well worth reading.

If you want to find out about daily life for your ancestors in the workhouse, this authoritative book provides some excellent background information. There is also a useful section on Poor Law and workhouse records, plus an extensive bibliography if you want to delve deeper into the subject.

As seen in Essence Magazine.