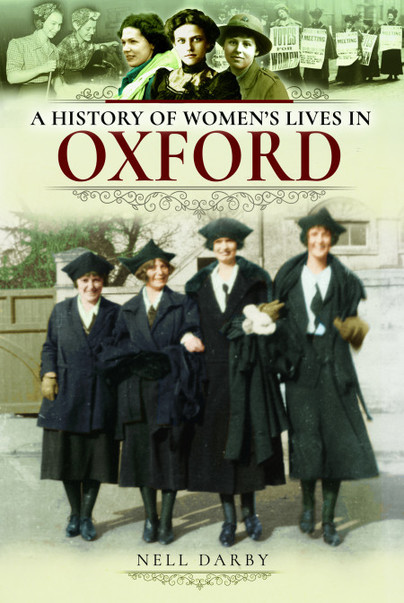 A History of Women's Lives in Oxford (Paperback)

Add to Basket
Add to Wishlist
You'll be £8.99 closer to your next £10.00 credit when you purchase A History of Women's Lives in Oxford. What's this?
+£4.50 UK Delivery or free UK delivery if order is over £35
(click here for international delivery rates)

Underneath the dreaming spires of Oxford’s world-famous university, generations of women have lived their lives, fighting for the right to study there, and for a role within the city’s educational, political and social spheres. Although a few of these women’s names have been recorded for posterity, they have been largely because of their association with worthy or famous men; in this book, though, their own lives are detailed, along with those who have been largely omitted from history.

Women’s lives have always been less recorded than those of men; where a woman helped her husband with his business, this help may not have been formally recorded in the census returns, and the details of jobs recorded there might not reflect the full scale of women’s work and responsibilities. So here, learn about the variety of work women undertook; their education, their social lives, and their attempts to carve out a valuable role for themselves. Learn too of the problems they faced in living their lives: poverty, prison, suicide, or even murder. This is no pretty picture of Oxford life designed for tourist brochures; instead, it aims to take a snapshot of the varied experiences of the city’s female population over the course of a century.

I really enjoy the books in this series and this one was a pleasure to read – I enjoyed that the period covers from 1850-1950 covering some of my favourite periods in history through from the Victorian and Edwardian eras to the second World War.

I love social history and this series is a great way to find out more about how women from different areas have developed over time, from the clothes they wear, the jobs they do and to changes in relationships and in the home. There were a lot of changes over the period and it is great to have the impact focused on a particular area to follow the changes over the 100-year period. The book was well researched and well written and I found it to be an easy read.

It is 4 stars from me for this one – highly recommended and it was a great insight into what women’s lives would have been like in Oxford during this period!

This is a very informative and interesting book looking at mainly the last 150 years, it covers various subjects from health to prisons and work life to education. It’s not just about middle class women who can attend university it’s is about many classes of women and how life has affected them in Oxford.