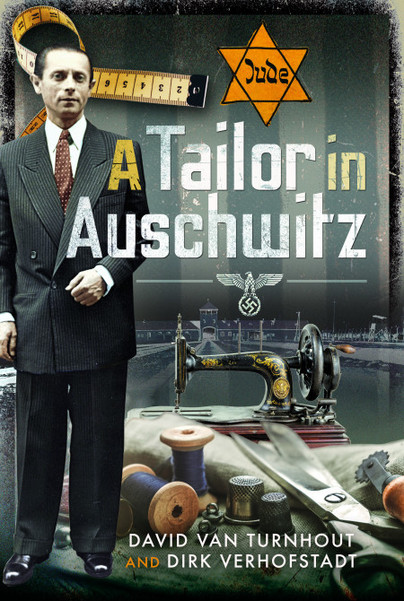 A Tailor in Auschwitz (Hardback)

Add to Basket
Add to Wishlist
You'll be £17.60 closer to your next £10.00 credit when you purchase A Tailor in Auschwitz. What's this?
+£4.50 UK Delivery or free UK delivery if order is over £40
(click here for international delivery rates)

David Van Turnhout and Dirk Verhofstadt traced the story of David's Jewish grandfather, Ide Leib Kartuz. Fleeing from antisemitism and violence, he came to Antwerp in 1929 and set up business as a tailor. The family he left behind ended up in the ghetto of Radomsko. Each and every member of the family was gassed at Treblinka. In Belgium, Kartuz joined the resistance movement, but was arrested by the Nazis in 1942 and deported to Auschwitz. On arrival there, his wife and two children immediately died a horrible death.

He survived in a unit of tailors where he repaired camp clothing and SS guards' uniforms, sometimes receiving special orders from SS officers. Kartuz endured an inhuman death march to Mauthausen. After the war, back in Antwerp, he made tailored suits for bankers and other business people. His final battle was against the Belgian state, for recognition as a Belgian citizen, member of the resistance and war victim. Very few people realise how difficult it was for Jewish people to survive after liberation.

The authors dig deep into the core of the Holocaust and investigate every trail from Radomsko to Miami. In the Auschwitz archives, they discover unpublished witness statements by tailors in Block 1. And completely unexpectedly, they also discover a cousin of Ide's, living in Florida. She had survived as a child by hiding in an attic in Brussels and speaks for the first time about those dark days. It took the authors a year to wind their questing way through important discoveries and setbacks but in this tribute, an unknown piece of history has finally been given a face.

Ide Leib Kartuz owed his life to being an excellent tailor. He was a Jew and Hitler and his Nazi party had vowed to kill off all Jews.

But, although confined in terrible conditions in various concentration camps, Kartuz was spared because the SS officers appreciated the clothes he was able to tailor for their wives and mistresses. This is the nub of the yarn in a new book about the life of Kartuz,, born in 1905 yet able to live on until 1995.

A Tailor in Auschwitz is a translation of a book first published in Antwerp, co-authored by one of Kartuz descendants. It's not an easy read but the chapters bring home the terrible plight of the Jewish and other prisoners in concentration camps and the cruelty suffered by them-if they lived.

The two authors of the book have followed the trail of Kartuz from the days he migrated from Poland in the wake of progroms there, to his pre-war days in Antwerp where he did well as an excellent tailor, through the German occupation, his arrest along with thousands of fellow Jews and their arrivals at various death camps.
The authors, David and Dirk, describe the year-long quest and collection of information from various sources about Kartuz terrible life including visits to some of the Polish villages where their hero was born. Much of the information is gained from Nazi war crime trials.

After the war, and back in Antwerp, Kartuz, suffering from his inhuman treatment, was able to continue his tailoring until he eventually went into a retirement home near Brussels where he died with a brain tumour in 1995.,

The human spirit really knows no bounds and the survivors of the holocaust and their families really are a example of this.

The book is really well written and the preface explaining the lack of prior knowledge the author and his new found family knew of his grandfather was heart wrenching and fascinating.

The details included from his research were at times confusing with all the details, but quickly wove together to make the story stronger.

A heart-wrenching book that does what so many contemporary non-Jewish authors writing true holocaust stories fail to do: demonstrate the horrors of antisemitism. This book, however, shows what the reader needs to see, and that is the harsh depths of terror Jews experienced both during the Holocaust and pre-Holocaust eras.

There have been several stories written in the last couple of years about Auschwitz, the people that were imprisoned there, and of course the Germans that caused so much pain and terror. This book is no different. The emotions you go through each time you read about the horrors of Auschwitz and the lives lost there, you feel heartbreak, anger and even hatred. It’s interesting the people the Nazi’s kept alive in the camp and their reasoning. This time it’s a tailor. The Nazi’s exterminated his wife and two children but kept Ide alive because of his skills as a tailor. The Nazi’s if anything were extremely concerned about appearances and used those captive to help them maintain those appearances.

I ran through so many emotions with this book. I believe you will too.

A Tailor In Auschwitz by David van Turnhout and Dirk Verhofstadt (translated by Kristien De Wulf and Jane Camerea) is a powerful and horrifying account of the plight of the Jewish people during World War II.
The book came about after researching David van Turnhout’s paternal grandfather’s experiences during WWII. Whilst alive, his grandfather spoke very little about his war years.
As we hear the story of his grandfather, this microcosm is part of a much bigger story.
The authors have thoroughly researched the Holocaust and intersperse the author’s grandfather’s story with the wider picture.
It was a time of great evil and the book makes shocking reading but it must be read to keep alive the memory of the six million who perished and no longer have a voice.

David Van Turnhout is Ide Leib Kartuz ’s grandson, the main character in this book. When he met Dirk Verhofstadt, Dirk persuaded him to write about his grandfather who was a survivor of the Auschwitz concentration camp. The two gentlemen decided to write the book together and travelled around the world to find out more about Ide Leib Kartuz’ story. Their work resulted in this book, that came out in Belgium in 2019. Today David is still writing political opinions and works as a freelance communication specialist.

Dirk Verhofstadt is a professor at Ghent University (Belgium). He is the author of about twenty books on politics, political philosophy and history. He wrote about the history of liberalism, the year 1914 as the start of the First World War, and the dubious role of Pius XII during the Second World War. His research focuses mainly on the history of the Holocaust and the danger of the extreme right.