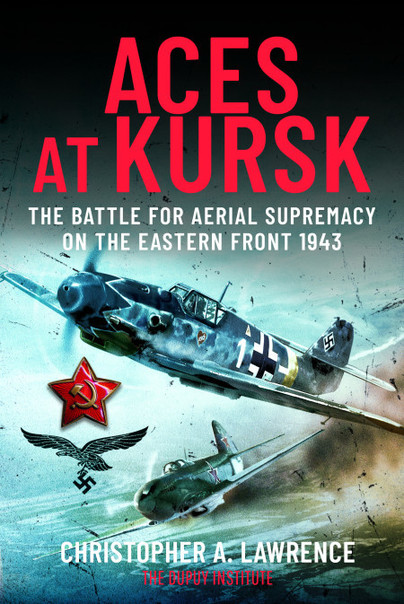 The Battle for Aerial Supremacy on the Eastern Front, 1943

Preorder
Add to Wishlist
You'll be £21.00 closer to your next £10.00 credit when you purchase Aces at Kursk. What's this?
+£4.50 UK Delivery or free UK delivery if order is over £35
(click here for international delivery rates)

The Battle of Kursk in July 1943 is known for being the largest tank battle in history. A Russian victory, it marked the decisive end of the German offensive capability on the Eastern Front and set the scene for the Soviet successes that followed. While many have focused on the tank engagements, especially the Battle of Prokhorovka, there was an intense air battle going on overhead that was bigger than the Battle of Britain.

As part of the German offensive, the Luftwaffe’s VIII Air Corps deployed around 1,100 aircraft in the south alone, while the opposing Soviet Second and Seventeenth air armies initially deployed over 1,600 aircraft. There was a similar effort surrounding the German attack in the north.

The battle in the south began with a Soviet air strike on German airfields and a fight for control of the air that continued throughout the day across the front. On the first day of the battle, 5 July 1943, the Germans flew at least 2,387 sorties in the south while the two Soviet air armies flew 1,688 sorties. That first day of battle resulted in 19 to 27 German planes and 189 Soviet aircraft shot down. This was an aerial engagement like no other ever seen before.

But there was also the massive ground attack effort by both sides, including the Junkers Ju 87 Stuka fitted with 37mm anti-tank guns flown by the man who would become most decorated soldier of the Third Reich, Hans-Ulrich Rudel. The aerial battle involved hundreds of Soviet Sturmoviks, or IL-2s, Stalin’s armoured ground attack plane. The battle featured the famous attack by Luftwaffe Hs-129s and Fw-190s on Soviet armour on 8 July 1943.

Aces at Kursk is not just a war story, but a revealing investigation that analyses the entire air battle that turned the tide of the war on the Eastern Front.

About Christopher A Lawrence

CHRISTOPHER A. LAWRENCE is a professional historian and military analyst. He is the Executive Director and President of The Dupuy Institute, an organization dedicated to scholarly research and objective analysis of historical data related to armed conflict and the resolution of armed conflict. The Dupuy Institute provides independent, historically-based analyses of lessons learned from modern military experience. His published works include the 1,662-page Kursk, papers and monographs for the Congressional Office of Technology Assessment and the Vietnam Veterans of American Foundation, as well as over 40 articles written for limited-distribution newsletters and over 60 analytical reports prepared for the Defense Department.