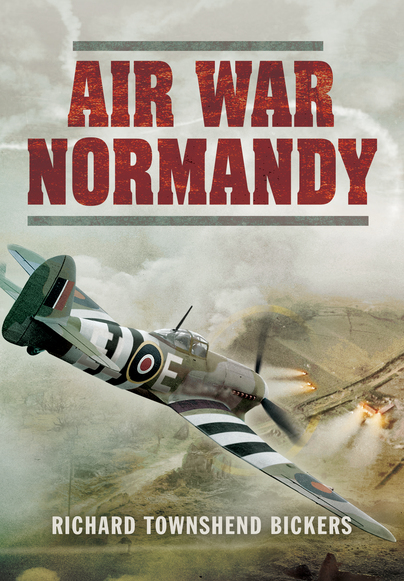 Add to Basket
Add to Wishlist
You'll be £12.99 closer to your next £10.00 credit when you purchase Air War Normandy. What's this?
+£4.50 UK Delivery or free UK delivery if order is over £35
(click here for international delivery rates)

So much ink has been spilt and so many miles of film expended on the amphibious invasion of Normandy on 6 June, 1944, otherwise known as D-Day, and so familiar have the images become of men leaping from their landing craft and wading ashore as shells exploded all around them, that it is all too easy to forget that none of this would have been possible without the virtually complete air superiority which the Allies had gained over the Luftwaffe in advance of the invasion.

In this absorbing book, Richard Bickers (who himself possesses first-hand experience of serving in Fighter and Coastal Commands and in the Desert Air Force) describes how that superiority was won and held after the landings. He describes in some detail how the vital necessity of air/land cooperation was brought home to the senior officers in North Africa and emphasizes how valuable this lesson was to prove later in the war.

He tells of several of the French and Belgian units who had managed to escape from Nazi-held Europe to fight on and were now returning home. He recounts the experiences of German pilots who were by then seeing things in a very different light.

He also describes the war of the men on the ground, the crews who serviced the planes and the Airfield Construction Squadrons who built and ran the runways as the Allies advanced into Occupied France. Richard Bickers has produced a worthy tribute to a supremely gallant band of men who played a vital part in restoring liberty and democracy to the continent of Europe.

This is a very accessible account of the air war over Normandy, it is wrote in a way that appeals to the novice but also to those wanting to expand on their knowledge.

This is a must for aviation enthusiasts.

As featured on Aviation Books Reviews.

First published in 1994, this reprint brings Richard Townshend Bickers' perspective to the Normandy Campaign in the air.

This book looks at the contribution of air power from the preparation of the battlefield and deception operations to an account of air operations throughout the campaign. He includes some accounts from those who were there, and on both sides of the battlefield. He emphasises that a great many "routine" sorties contributed to the build-up, citing Coastal Command operations and the evolution of close air support from the desert campaigns as ways in which, gradually, tactics were evolved that bore fruit in the end.

Overall, a very good read for those who want a short (less than 200 pages) and vivid account of the contribution of air power to the success of the D-Day landings.

R.L.T. Bickers has written more books about the RAF and its predecessor, the RFC, than any other author past or present - some under a pseudonym. His biography of his friend ‘Ginger’ Lacey, the top-scoring pilot in the Battle of Britain, was published to acclaim in 1962.

He volunteered for the RAF on the outbreak of war and served, with a Permanent Commission, for eighteen years. In England he operated with Fighter and Coastal Commands; in North Africa and Italy with the Desert Air Force and Mediterranean Allied Coastal Air Force. After the war he did a tour in Hong Kong and Malaya.