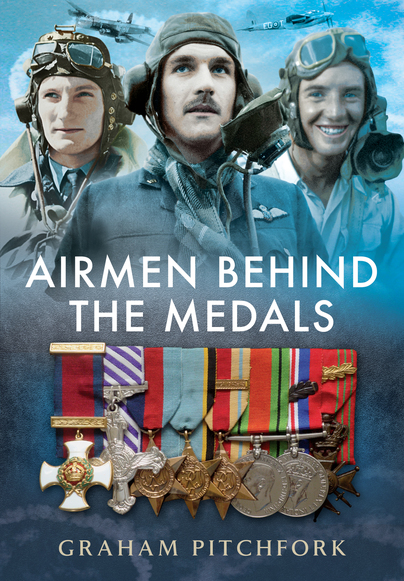 Airmen Behind the Medals (Kindle)

You'll be £4.99 closer to your next £10.00 credit when you purchase Airmen Behind the Medals. What's this?
Need a currency converter? Check XE.com for live rates

Of the many human characteristics, few evoke greater admiration and respect than gallantry in the service of one's country. Here, Graham Pitchfork describes the outstanding bravery of twenty-one air men who served in the Royal Air Force and the Fleet Air Arm during the Second World War. These accounts encompass most theaters of operation as well as a host of aircraft types and aircrew categories. Accounts of the gallantry of those who served on the ground in support of flying operations are also relayed in this substantial anthology.

The book explores the gallantry of airmen who fought in a variety of contexts, including that band of men who are so often forgotten, the Burma veterans. A gallant RAF sergeant and an RAF doctor who cared for and inspired fellow prisoners in Japanese camps are both included here, as are stories relating the extreme bravery of a Fleet Air Arm pilot, a Pathfinder pilot and a Typhoon wing leader.

The valorous acts of these airmen serve as inspirational examples to a new generation of flying men and women. Graham Pitchfork extracts the drama and poignancy of their tales, enlivening them to great effect in this riveting publication that is sure to appeal broadly to enthusiasts of the era.

The book is made of glossy paper and that certainly enhances the black and white pictures. There are colour pictures of the medals but also beautiful black and white ones. What appealed to me is that it told about very different people and their experiences. All short but powerfully displayed by the author. Timeless stories about beautiful people! Might a fourth part show up? Hope so!

Graham Pitchfork is a prolific author and happens to be a retired air force officer of vast experience and he brings all this to the books he writes. His no-nonsense writing style is very appealing and you can rest assured that attention to detail and empathy with his chosen subject matter is all there. This latest book is a series of pen portraits of airmen who were awarded medals for their gallantry in a range of circumstances during the Second World War...

... Mr Pitchfork introduces us to twenty-one airmen who are all pretty special and he does a good thing by not confining himself to aircrew or a particular strand of the conflict. He brings to light people of various ranks and roles including a doctor and an RAF Regiment NCO and treats them all with equality and respect.

We get the usual mix of pilots and aircrew doing immensely brave things but we also see people who just got on with it over periods of time and who showed consistent valour and fortitude. These are people to admire.

There is a useful chapter on the medals available to airmen and although the author avoids the Victoria Cross (a good thing in my opinion) we are introduced to some very brave individuals who deserved the recognition they received. Some should probably have earned a bit more.

The photographs include images of the men recorded here along with a series of colour shots showing their medal bars. I don’t collect medals and would never start but seeing them all like this is very impressive and not a little stirring. Medals are nice, but the people matter more and Mr Pitchfork has done a really good job here. This isn’t an exciting book with overblown tabloid newspaper style writing, it is solid history well told. I never have any difficulty recommending books like this. They tick all the boxes and keep something of the people they feature alive and I really like that aspect.

‘The third in the series by Air Commodore Graham Pitchfork, Airmen Behind the Medals, explores the extraordinary courage and dedication of 21 airmen who either flew or supported Second World War flying operations. Pitchfork has chosen accounts that highlight the breadth of operations in which British and Commonwealth airmen were involved, including those in Europe, Chindit air-drops, air-sea rescue, the Desert Air Force, and an RAF doctor’s bravery in Japanese PoW camps. These were ordinary men who rose to overcome extraordinary challenges. Pitchfork’s examination of their gallantry conveys superbly a spirit and ethos that both inspires and endures in the RAF today

'A new book about the outstanding bravery of twenty-one men who served in the RAF and the Fleet Air Arm in World War Two.'

Fascinating.... Graham [Pitchfork, the author] brings the stories to life in vivid detail.