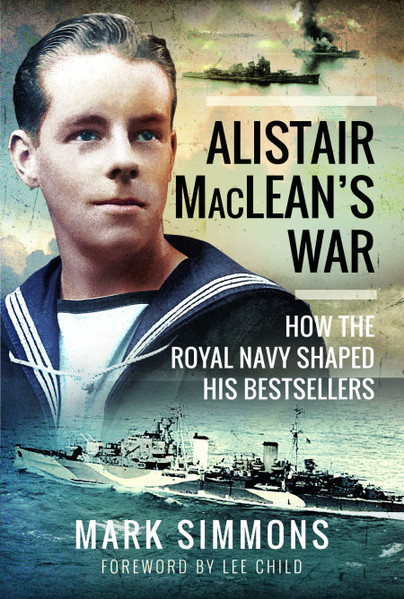 How the Royal Navy Shaped his Bestsellers

Add to Basket
Add to Wishlist
You'll be £16.00 closer to your next £10.00 credit when you purchase Alistair MacLean's War. What's this?
+£4.50 UK Delivery or free UK delivery if order is over £35
(click here for international delivery rates)

It is no coincidence that many of Alistair MacLean's most successful novels were sea stories. In 1941, he was called up after volunteering for the Royal Navy and served as Ordinary Seaman, Able Seaman, and Leading Torpedo Operator. For the majority of his service, he was on HMS Royalist, a modified Dido-class light cruiser, seeing action in the Arctic, and operations against the German battleship Tirpitz . The ship then deployed to the Mediterranean taking part in Operation Dragoon the invasion of the South of France and later in operations against German occupied Greek Islands in the Aegean. After which MacLean and Royalist were deployed to the Indian Ocean and operations against the Japanese in Malaya, Burma, and Sumatra.

His wartime experiences coupled with exceptional literary skill resulted in the runaway success of his first novel HMS Ulysses (1955) followed by The Guns of Navarone (1957) and South by Java Head (1958). These three blockbusters cemented his position as one of the most successful and highly paid authors of the era.

Mark Simmons followed his family’s tradition of service in the Royal Navy and Royal Marines dating back to the times of Nelson. He served in the 1970's with the Royal Marines in 40 Commando, 3 Commando Brigade HQ and the Commando Logistics Regiment.

He has written some 200 feature articles, mainly on naval and military, motoring and travel subjects. He is also the author of thirteen fiction and non-fiction books including a fiction series about a reluctant M15 agent, Rob Nicolson, and two works on Ian Fleming.

His interests include quizzes, playing skittles and classic cars; he is a keen member of the Alfa Romeo Owners Club.

Mark appeared in the BBC Scotland documentary called "The Adventures of Alistair MacLean".