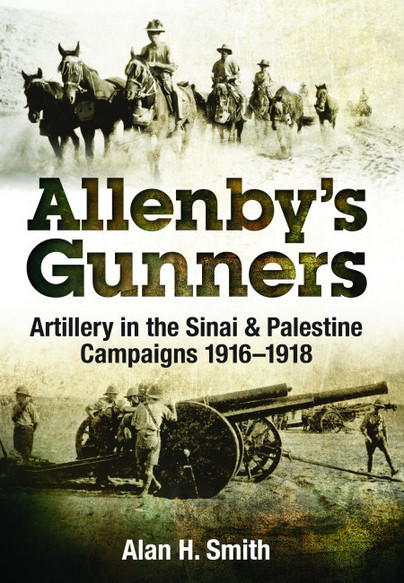 Artillery in the Sinai and Palestine Campaigns 1916-1918

Add to Basket
Add to Wishlist
You'll be £21.00 closer to your next £10.00 credit when you purchase Allenby's Gunners. What's this?
+£4.50 UK Delivery or free UK delivery if order is over £35
(click here for international delivery rates)

Alan Smith's Allenby's Gunners tells the story of artillery in the highly successful World War I Sinai and Palestine campaigns. Following Gallipoli and the reconstitution of the AIF, a shortage of Australian gunners saw British Territorial artillery allotted to the Australian Light Horse and New Zealand Mounted Rifle brigades. It was a relationship that would prove highly successful and Allenby's Gunners provides a detailed and colourful description of the artillery war, cavalry and infantry operations from the first battles of Romani and Rafa, through the tough actions of Gaza, the Palestine desert, Jordan Valley and Amman to the capture of Jerusalem. The story concludes with the superb victory of Megiddo and the taking of Damascus until the theatre armistice of 1918.

Smith Covers the trials and triumphs of the gunners as they honed their art in one of the most difficult battlefield environments of the war. The desert proved hostile and unrelenting, testing the gunners, their weapons and their animals in the harsh conditions. The gunners' adversary, the wily and skilful Ottoman artillerymen, endured the same horrendous conditions and proved a tough and courageous foe.

The light horsemen and gunners also owed much to the intrepid airmen of the AFC and RFC whose tactical and offensive bombing and counter-battery work from mid-1917 would prove instrumental in securing victory. This is an aspect of the campaign that is seamlessly woven throughout as the action unfolds.

The Sinai and Palestine campaigns generally followed a pattern of heavy losses and setbacks for an initial period before allied forces eventually prevailed. This is a highly descriptive volume that tells and oft-neglected story and fills the gap in the record of a campaign in which Australians played a significant role. It is a welcome addition to the story of the Australians in the Middle Eastern campaigns of World War I.

The author takes us through the tough actions of Gaza, the Palestine desert, Jordan Valley and Amman to the capture of Jerusalem. The story concludes with the superb victory at Megiddo and lastly the taking of Damascus in 1918.

I have been lucky enough to visit the battlefields of Allenby’s successful campaigns in what was Palestine on more than one occasion. The next time I go I will be taking this book with me. The author has broken the campaigns into chronological narratives that are an ideal thread for an associated tour itinerary, each supported with excellent maps. The content is as digestible as the format is clear and logical. While focussed on the Guns and the Gunners of both sides, the other Arms that they supported are not excluded. The result is an excellent overview of a dramatic and hard fought campaign.

Allenby's campaign is not perhaps, a forgotten front, but it has had little attention paid to it in the centenary period. This book goes some way to redressing the balance. It is not a book to be read and given away, but one to be retained as an invaluable work of reference, saving us all many hours of labour in the archives. Well done and thank you Mr Smith!

This book has re-sparked an interest in me in the Sinai and Palestine Campaigns of 1916 to 1918 as well as a desire to look further now at the carving up of the Middle East by the British and French post war.

Mr Smith, you have written a remarkable history and I commend you for it. It is a book I will refer to again many times in the coming years. And hour to spare, a narrative to read. Well written, I have no hesitation in recommending this book to anybody with an interest in Military History.

Integrated photographs, maps, tables and also abbreviations guide is included at the front of the book, thus providing helpful links and points of information as you read. As you open the book, the author has enclosed a striking portrait if General Edmund Allenby. The photographs, maps, and tables included as all listed at the front. Some books may have one or two photo sections spread throughout. This text, however, beautifully intersperses the photographs throughout the development of the text, therefore giving the reader constant pictorial references to descriptions. I also thought it was different how, upon each major section of the book, a photo page separates the key date period. Overall, the research which has gone into this work is exemplary; at all levels. Artillery made a significant impact on the success of the campaigns in the Middle East. This book is a permanent testimony to that achievement.

This Australian perspective has been well-researched and provides a view of highly successful desert campaigns during WWI. Descriptive text is supported by interesting and rare images through the body of the book – Most Highly Recommended.

A product of Newcastle, the author combined a career in the Broken Hill Proprietary Company Limited with service as a Reservist from 1951 until 1968 in regimental postings in artillery and later logistics staff postings. He holds a Masters degree from the University of Newcastle in commerce and economics and he is the Editor of the Journal of the Royal Australian Artillery Historical Company, Cannonball. This is not his first publication. He is also the author of Do Unto Others, another publication in the Australian Army History Collections.

It would not be possible to present an account and evaluation of the part artillery played in the Sinai and Palestine campaigns of 1916 to 1918 without first describing the strategic setting and then giving an account of the sequence of events that took place. In doing so, it would be easy to lose sight of the aim of focus on the artillery.

The author is not only able to strike a balance between the narrative of the events that took place and the part artillery played. He similarly treats the description of the big picture and of detail, such as an incident of a gun falling into a wadi, and between general narrative and technical detail. In this way he has produced a work that should preserve the attention and interest of the reader from beginning to end, whatever the reader’s level of knowledge of warfare or of artillery.

To achieve this Alan Smith has consulted and drawn on an impressive array of sources, primary and secondary, which he lists in his Notes on Sources, and alludes to in a helpful Preface. One has a sense that the material distilled into this book is the tip of a vast iceberg of research.

Maps, photographs and tables illustrate the book. Keys to abbreviations and map symbols are provided and there is an extensive index and a bibliography and there are unobtrusive footnotes throughout. There are eight appendices to accommodate data such as orders of battle, a chronology, senior postings, war establishments of men and equipment, and ammunition expenditure. In a final chapter and epilogue Alan Smith draws conclusions from the material he has presented in this book and comments on the future of the lessons learned during the campaign.

I heartily commend the book whether the reader be a scholar or someone just looking for a good read.

Alan Smith was born in Newcastle and educated at The Armidale School and Newcastle Boy’s High School. He gained an Associate Diploma in Industrial Chemistry in 1952 and in 1982 he completed a Masters Degree from the University of Newcastle in commerce and economics. He joined the C M F in 1951 as a Recruit Gunner in R Battery, 21 Field Regiment, RAA in Newcastle and was commissioned in June 1954. He had regimental service with the Royal Artillery with SP regiments based in Bloomsbury, London and the Royal Canadian Artillery in Toronto, Ontario during 1954-55. He was promoted major with the Regiment but continued his military service with 2nd Battalion, RNSWR as Support Company commander.

After further training his military education led him into logistics staff appointments in HQs of Communication Zone and 8 Task Force. He was awarded the Efficiency Decoration in 1966 and retired in 1968. He was appointed to the Executive Staff of The Broken Hill Proprietary Company Limited in 1960 and occupied Personnel/Human Resource positions in Corporate, Steel and Wire Divisions in his 36 years service to 1992. His third ‘career’ is writing artillery history as Assistant Editor and now Editor of the Journal of the Royal Australian Artillery Historical Company, Cannonball.