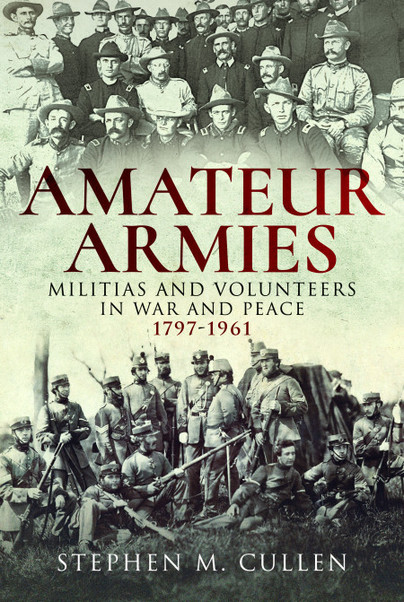 Add to Basket
Add to Wishlist
You'll be £19.99 closer to your next £10.00 credit when you purchase Amateur Armies. What's this?
+£4.50 UK Delivery or free UK delivery if order is over £35
(click here for international delivery rates)

Amateur Armies examines the military and social history of volunteer armies around the western world from the failed French invasion of South Wales in 1797 to the disastrous anti-Communist invasion of the Bay of Pigs in Cuba in 1961.

It brings together some fascinating military actions across more than a century and a half of history and explores the social and political context in the countries involved. Stephen Cullen’s absorbing and original book is the first general survey of the role of amateur armies during the period.

Included are chapters on a series of wars in which militias played critical parts. In each case, their actions and effectiveness are described as is the background from which they came, and the social and political circumstances in which they operated. This pioneering study offers a valuable insight into each of the amateur armies covered and opens up an important and hitherto neglected aspect of military history.

This is a topical read, and a fascinating examination of the military and social history of ‘Volunteer Armies’ and their employment around the
western world.

...this book is well worth grabbing, as I did nd it an interesting read, and there’s lots of scope for the war gamer to pull out some great background informa- tion for creating amateur units as well possible scenarios to replay such as Fishguard. This will appeal to many military historians out there and most would not be disappointed if they found this wrapped up under the Christmas tree.

Amateur Armies are a phenomenon I have never ever considered needing further information on, but Stephen Cullen's superb book has changed all that, with considerable research and fascinating facts.

This is an interesting insight into the creation and role of militia and ‘home defence’ units and how they became relevant and important to various conflicts. Maps would have been useful in delivering a better and complete understanding of some of the actions used as examples.