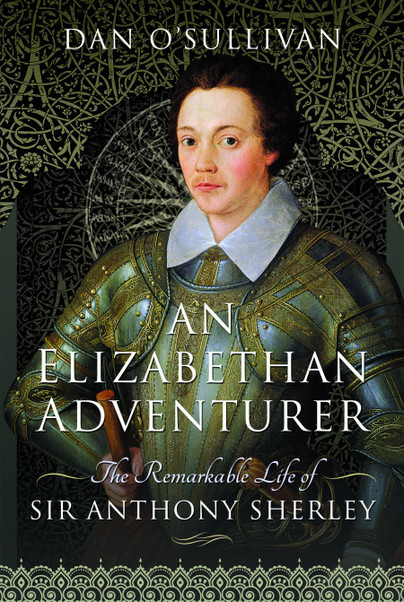 Add to Basket
Add to Wishlist
You'll be £20.00 closer to your next £10.00 credit when you purchase An Elizabethan Adventurer. What's this?
+£4.50 UK Delivery or free UK delivery if order is over £35
(click here for international delivery rates)

Anthony Sherley (1565-1633) was one of three brothers from a Sussex gentry family, whose adventures abroad fascinated their contemporaries. Their doings were celebrated and exaggerated in printed pamphlets and a play on the London stage, but are scarcely known today. Anthony was a soldier fighting in France and the Netherlands, and then an unsuccessful privateer, before his patron, the earl of Essex, chose him to lead a group on a mission to Ferrara, which proved abortive. Sherley then undertook on his own initiative to take his followers on a highly risky journey across Turkey to Persia. He hoped to persuade the Shah to ally with the West against their mutual enemy, Ottoman Turkey. Surprisingly, Shah Abbas the Great (1587-1629) approved the plan, and sent Sherley back to Europe as his ambassador.

But after that things went badly wrong. Essex lost all influence at court, and was eventually executed for treason. Sherley was refused permission to return to England. He was on his own, and had to find new ways of living and earning. After various episodes in Venice and Morocco he ended up in the pay of Spain, and was chosen to command a fleet created to stop pirates from attacking Spanish possessions. After the failure of this project he was forced to retire to Granada, and lived the rest of his life on a meagre royal pension. But he continued trying to give advice, based on his past experiences, to the king of Spain and his ministers.

The book will concentrate on Sherley’s career, but will broaden the theme by including chapters on his father and his two brothers, and in particular on Persia and Shah Abbas, the Persian king whom he met. Anthony was an irascible, complex character, often derided and disliked. This biography is more sympathetic than previous ones, and discusses his self-fashioning and his belief in his personal honour, both of which might account for some of his misdemeanours, especially after the death of his patron.

Dan O’Sullivan is a retired history teacher and lecturer. He gained his degrees in history from the universities of Cambridge and East Anglia. He has previously published Tudor Britain (Longman) and In Search of Captain Cook (Taurus). His most recent one was The Reluctant Ambassador (Amberley, 2016), which is about the life of Sir Thomas Chaloner, who ended his career as English ambassador to Spain, 1562-5.

The Sea Dogs were seafaring merchantmen who originally traded mainly with Holland and France. During Queen Elizabeth’s reign, however, they began to spread their reach, sailing further and further afield exploring and plundering. The main source of wealth quickly became the Caribbean, which, until then, had been predominantly the domain of wealthy Catholic Spain. The first man to trade with the Spanish Main was John Hawkins, who travelled to West Africa, captured the natives and transported them to the Caribbean. There he sold them to plantation owners in exchange for goods such as pearls, hides…