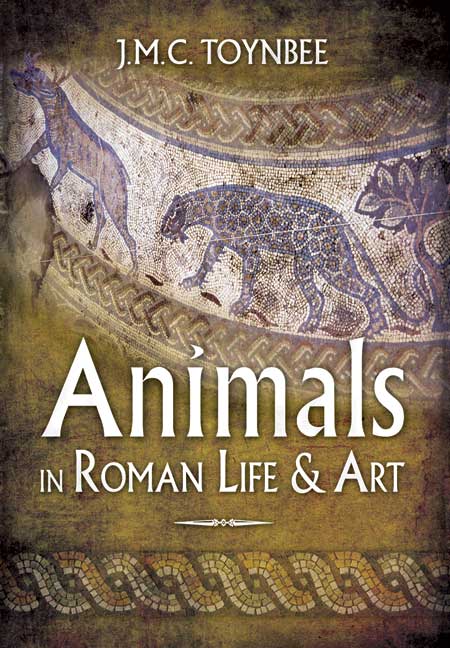 Add to Basket
Add to Wishlist
You'll be £18.99 closer to your next £10.00 credit when you purchase Animals in Roman Life and Art. What's this?
+£4.50 UK Delivery or free UK delivery if order is over £35
(click here for international delivery rates)

Romans clearly loved their pets and gave them human names. The wealthiest kept gazelles and ibex on their estates as living lawn ornaments. At the same time, they imported exotic animals from Africa and then slaughtered them in both gladiatorial combat and cold-blooded spectacle. Animals in Roman Life and Art explores animals in Roman iconography, Roman knowledge - both factual and fanciful - about various fauna, and Roman use of animals for food, clothing, transport, war, entertainment, religious ceremony, and companionship. Arranged by species, J.M.C Toynbee's magisterial survey ranges from the exotic (the rhinoceros and hippopotamus) to the commonplace (dogs and cats). Toynbee concludes her study with a discussion of Roman beliefs about animalsin the afterlife, where, according to Virgil, "the herds will not fear the mighty lion" and "the timid deer will ... drink beside the hounds".

"As a study of the place of animals in Roman art, this is a labour of love by a scholar who knows her subject inside and out ... About the individual beasts known to the Romans and illustrated by their artists it is a mine of information, both useful and curious." - Times Literary Supplement

A fascinating volume by the accomplished scholar Professor Jocelyn Toynbee

This is a welcome reissue of a fascinating volume by the accomplished scholar Professor Jocelyn Toynbee, originally published in 1973. She describes the roles that animals played in the Roman world or in warfare, as domestic pets or as food. She also outlines their mythological and religious symbolism. An added extra is the appendix on Roman veterinary medicine.

Jocelyn was an English archaeologist and art historian. She was a leading British scholar in Roman artistic studies in the mid-twentieth century and one of the recognised authorities in the world. Jocelyn graduated with a first class degree in Classical Tripos from Cambridge before going on to work as a tutor and lecturer at Oxford, Reading and Cambridge Universities, before becoming Laurence Professor of Classical Archaeology at Cambridge from 1951-1962. Jocelyn conducted her archaeological work in Roman Britain, broadening her appreciation to provincial and Celtic art. She died 1985.