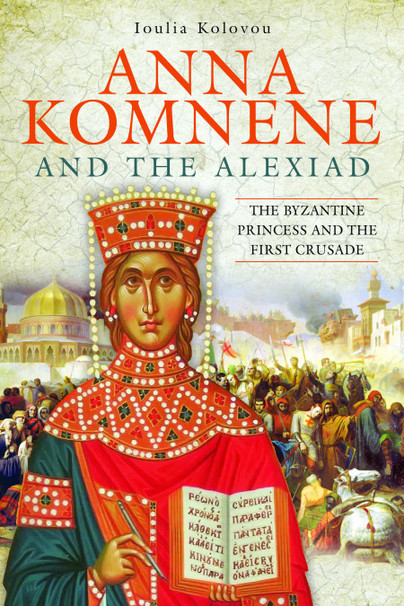 Anna Komnene and the Alexiad (Kindle)

The Byzantine Princess and the First Crusade

Click here for help on how to download our eBooks
Add to Basket
Add to Wishlist
You'll be £4.99 closer to your next £10.00 credit when you purchase Anna Komnene and the Alexiad. What's this?
Need a currency converter? Check XE.com for live rates

Anna Komnene is one of the most curious figures in the history of an intriguing empire. A woman of extraordinary education and intellect, she was the only Byzantine female historian and one of the first and foremost historians in medieval Europe. Yet few people know of her and her extraordinary story. Subsequent historians and scholars have skewed the picture of Anna as an intellectual princess and powerful author. She has been largely viewed as an angry, bitter old woman, who greedily wanted a throne that did not belong to her. Accusations of conspiracy and attempted murder were hurled at her and as punishment for her ‘transgressions’ she was to live the last days of her life in exile. It was during her time in a convent, where she was not a nun, that she composed the Alexiad, the history of the First Crusade and the Byzantine Emperor, Alexios I Komnenos (1081-1118), her father.

This book aims to present Anna Komnene - the fascinating woman, pioneer intellectual, and charismaticc author - to the general public. Drawing on the latest academic research to reconstruct Anna's life, personality and work, it moves away from the myth of Anna the conspirator and 'power-hungry woman' which has been unfairly built around her over centuries of misrepresentation. It places Anna Komnene in the context of her own time: the ancient Greek colony and medieval Eastern Roman empire, known as Byzantium, with the magnificent city of Constantinople at its heart. At the forefront of an epic clash between East and West, this was a world renowned for its dazzling wealth, mystery and power games. It was also known for a vigorous intellectual renaissance centuries before its western counterpart. This was a world with Anna Komnene directly at the centre.

The author does a fantastic job in recreating this world for the reader, in great depth - sometimes almost too much. We learn of her birth and childhood, as well as her all-important education. Anna was no lazy princess, but a seriously gifted and intelligent young woman who we might wish had been born a few centuries later, so we could know her ourselves. My favorite parts were hearing from Anna herself, in her own words. The author makes good use of primary sources.

The author sets the stage well. It was quite easy to lose myself in the grandeur, the dazzling and dizzying world of medieval Byzantium - and of course Constantinople in particular.

Kolovou succeeds in penetrating the elite Byzantine world and making it accessible, which is no mean feat. She also rescues Anna from the talons of misogynist historians and places her where she belongs as an extraordinary, but very human, woman, not the monster we have been led to expect. In doing so, Kolovou has performed a useful service to Anna Komnene and history.

I really loved this book! Anna Komnene was a woman who was underrated for her time. Women have not been given the proper due through the ages through history. While we are aware and know of them, we have not necessarily given them the deep dive and scrutiny that they deserve.

Anna Konmene was a powerhouse, and she deserves so much more attention than what she has been given this far. I could not believe how much I discovered about her, and so much of what I did not know, was laid out in an easy to read manner, that was not confusing or too jumpy to follow. Loulia Kolovou did a fabulous job with this piece, and I look forward to seeing what they publish next!

Anna Komnene and the Alexiad: The Byzantine Princess and the First Crusade was a well-written, well-researched and an overall fascinating read. Throughout the whole of this book you are presented with such interesting information that is not only both relevant but also engaging.

This biography was such a brilliant addition to women’s history. Anne Komnene is such a fascinating and all around amazing woman within history. This book offers such a vivid insight into such a bright and intelligent woman who would have otherwise been mostly if not all but forgotten by history.

Ioulia Kolovou transports the reader to medieval Byzantium in Anna Komnene and the Alexiad and looks at the role of Byzantium's only female historian. This is an insightful and well-researched look into an interesting side of history.

Anna Komnene was an exceptional princess and woman of her time. She wrote the "Alexiad" which is the only account of the first crusade in Greek. However, because she was educated, strong, intelligent, and published the men of her day hated her, wrote terrible untrue things about her, and insisted she hide her self away in a nunnery which is what you did to princesses and women you could not kill in the Byzantine era. I had never heard of Anna and I enjoy books about the medieval period so this was a treat. I was a little confused by all the names and characters but since I know very little about the Byzantine period I guess that is understandable. It was good to read about something different than the usual European history. This lady was amazing. Maybe I will take up the Alexiad and the crusades. Thank you to NetGalley and the publisher for allowing me to read about Anna in exchange for a review.

Ioulia Kolovou has written a fascinating history/biography about Anna Komnene and the Alexiad which she wrote about her father the Byzantine emperor Alexios at the time of the first crusade. Anna is the only Byzantine female historian whose work has survived to give us a unique view of Constantinople from the view of the Greeks and not the crusaders. As an imperial princess wed to another imperial relative she was at the heart of imperial power and intrigue. As well she was uniquely well educated in the classical manner. Ms. Kolovou gives a balanced account of Anna's life and scholarly work. Great feminist historical read.

The family tree and timelines are great to put her life into context of what was happening in the Byzantine Empire. The quotes from the Alexiad were also intriguing.

A really great and accessible read, lots of detail and would highly recommend for anyone interested in this period of history. I had read another book on the Komnene dynasty but that was more focussed on the men. This fills the gap in that history.

I definitely enjoyed this one! I did. I said YES on a whim. If you'd asked me before I wouldn't have said that the Byzantine empire was high on my list of interests...but it sounded intriguing to me. I liked the idea of reading about a female historian, one of the earliest. I liked the idea of spending time in the company of someone who LOVED to learn and valued education and knowledge. My curiosity was rewarded. I am glad I read it. I'm not sure there's a huge audience for this one. It isn't your typical beach read, your light and fluffy cozy mystery, your bodice-ripping romance. But I don't usually go for typical when I'm seeking my next book.

Whilst a little prior knowledge would be suggested, it is not necessary. Anyone with an interest in Byzantium, female historians, notable women, will find this to be a welcome addition to their own libraries.

Kolovou discusses Anna's family (important in the scheme of things), her birth, childhood, education, marriage - all though in the context of her father's reign as Emperor. Throughout, Kovolou uses many sources (including Anna's own words), not just those previously favoured by Western writers, to give a more rounded picture of Anna. Kovolou also addresses ambiguous passages or prior critiques of The Alexiad, and sets them up in the context that they were not only originally written but also according to Anna's own education and scholastic reading. Yes there were times when the author mentioned "more of that later" - only to indicate that the current discussion would not be derailed by going off topic midway through to pick up on something that would be presented in more detail - and in context - later on the book.

Most readers of The Alexiad pick up this tome for Anna's detail on the First Crusade - and as has been mentioned, it is the only Greek source available. I myself was tempted on more than one occasion to pick up my copy of The Alexiad and read it in conjunction with Kovolou's work - indeed, the author says at the end that it is her hope that the reader will do just that!

With a glossary of terms, maps, family trees a timeline for Anna herself, and an easy narrative, the reader will have no trouble following the story of this remarkable woman and her creation - The Alexiad.

Anna Komnene is a fascinating woman who dared go outside the norm of her time. For that she has been misconstrued ever since. She has been proclaimed a bitter, self-absorbed woman just because she dared enter a mans world. I was very pleased that Kolovou took a stab at rehabilitating her and restoring her good name.

The fascinating and interesting story of a Byzantine character I didn't know.
It's well researched, fascinating and I liked the style of writing.
A good and informative read, recommended.

I Enjoyed everything about this book there was nothing I didn't like about the book .I like the setting,the writing style,the plot,the plot twists and the characters in the book were amazing.I would gladly reread it again.

Anna Komnene was a Byzantine Princess but so much more, she was a scholar, historian and even a doctor and hospital administrator. She led an amazing life, especially for a woman of the late 1000s and early 1100s. History has written her story differently than Ioulia Kolovou shows her in this book. However, the author has taken great pains to share her extensive research with us. They say history is written by the victorious and that is often the case when men are writing the story of such a strong woman. I hadn't known anything about this amazing woman before picking up this book.

Ioulia Kolovou is a Greek-born writer and researcher based in Scotland. She has studied and taught Classics, History, Archaeology and Linguistics in Greece, Argentina and Scotland. She holds a PhD in English Literature: Creative Writing (University of Glasgow) and an MSc with Distinction in Creative Writing (University of Edinburgh). She is a member of the Society of Authors and has published fiction, academic work, and translations. Her research interests include reception of Byzantium, gender studies, Anna Komnene, Sir Walter Scott, historical fiction and historiography. She lives in Glasgow.