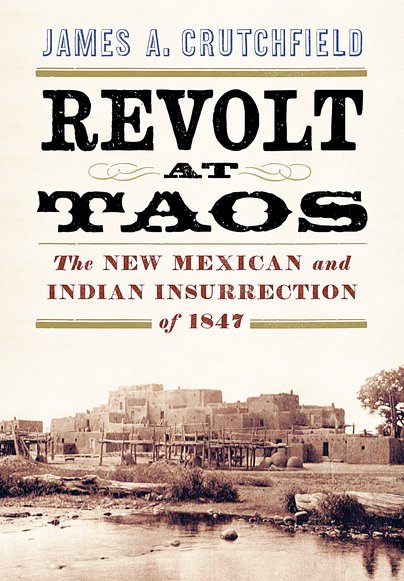 The New Mexican and Indian Insurrection of 1847

Add to Basket
Add to Wishlist
You'll be £25.00 closer to your next £10.00 credit when you purchase Revolt at Taos. What's this?
+£4.50 UK Delivery or free UK delivery if order is over £40
(click here for international delivery rates)

On the morning of January 19, 1847, Charles Bent, the newly-appointed governor of the American-claimed territory of New Mexico, was savagely killed at his home in Don Fernando de Taos, a small, remote town located north of Santa Fe. Those responsible for Bent's murder were New Mexican settlers and Indians from nearby Taos Pueblo who refused to recognize the United States occupation. With emotions rubbed raw, the natives continued their bloodbath until five more leading citizens were massacred in Taos. During the ensuing months, American civilians and
soldiers, along with scores of New Mexicans and Taos Indians, were killed and wounded throughout the region.

Less than a month following Bent's murder, in a two-day battle, volunteer and regular elements of an American army under the command of Colonel Sterling Price, emerged victorious after bombarding the insurrectionists at their refuge in the church at Taos Pueblo. Surviving participants in the earlier Taos murders were arrested, tried in American-dominated courts, and, within weeks, hanged for their actions.

The murder of Bent and the others at Taos and the subsequent trials and executions brought with them misunderstanding, controversy, mistrust, and recrimination on both sides of the issue. The events also subjected President James

K. Polk's administration to censure over what some critics believed was an over extension of presidential authority in claiming New Mexico as a territory.
In Revolt at Taos: The Mexican and Indian Insurrection of 1847,writer and historian James A. Crutchfield explores the fast-moving events surrounding the bloody revolt which left native inhabitants of New Mexico wondering how their neighbors and kinsmen could be legally tried, found guilty, and executed for acts they considered to have been honorable ones committed in defense of their country. These
concerns have never been adequately addressed and their struggle has been all but scrubbed from the history of American expansion.

The author has an impressive list of titles that deal with important periods in US history. This book provides a study of one of the key stages of US expansion in North America. Strongly Recommended.