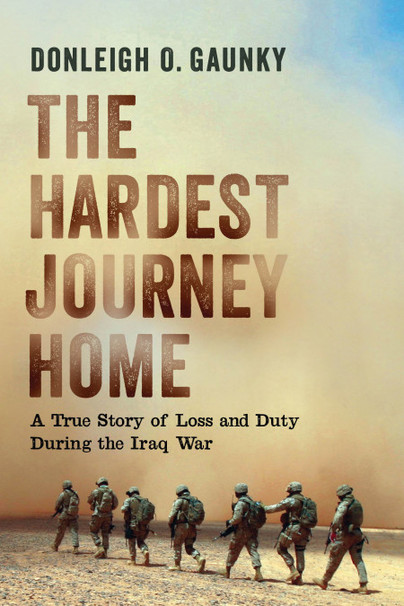 A True Story of Loss and Duty during the Iraq War

You'll be £25.00 closer to your next £10.00 credit when you purchase The Hardest Journey Home. What's this?
+£4.50 UK Delivery or free UK delivery if order is over £35
(click here for international delivery rates)

In November 2005, while analyzing live action reports at his base in Baghdad, Iraq, Donleigh O. Gaunky froze. His younger brother Alex’s unit had been hit by the enemy. Almost immediately, arrangements were made for Donleigh to meet his wounded brother in Germany, but Alex succumbed to his injuries before he arrived. Instead, Donleigh was asked to assume the role of remains escort. Most of the time a remains escort is picked at random from the appropriate branch of service or is someone with a relationship to the deceased, most often from the soldier’s own unit. Rarely—if ever in modern times—the escort is a family member. In The Hardest Journey Home: A True Story of Loss and Duty during the Iraq War, Donleigh O. Gaunky describes the events that unfolded over the course of a few days, from the front line in Iraq to the Landstuhl military hospital in Germany to their small town in Wisconsin, where he arrived with his brother’s body on Thanksgiving Day. In an effort to keep his mind off the tragedy and remain focused on his task, the author describes the protocol for escorting a body home—paperwork, appropriate attire, the proper use of the flag, when and where to salute—as well as how his divorced parents coped with the loss of one of their four sons serving in the military. Relying on commercial flights to bring Alex home, there was no military reception when they first landed in the United States and the author learned how little his brother’s sacrifice meant on a national level. But he was uplifted by his town’s response to his family’s loss when they unexpectedly lined the streets to pay their respects to one of their own. An important and moving story, The Hardest Journey Home, reveals the human cost of a long, seemingly invisible war.

DONLEIGH O. GAUNKY completed basic training on September 13, 2001. Assigned to the 101st Airborne Division at Fort Campbell, Kentucky, he was later reassigned to the 205th Military Intelligence Battalion, Fort Shafter, Hawaii. Gaunky served two tours of duty in Iraq between 2003 and 2006. After leaving the service, he earned a BS in Political Science from the University of Wisconsin- La Crosse. He remains and advocate for veterans and survivor issues, with a particular emphasis on addressing veteran suicides, for which he gave a TEDx presentation in 2014.