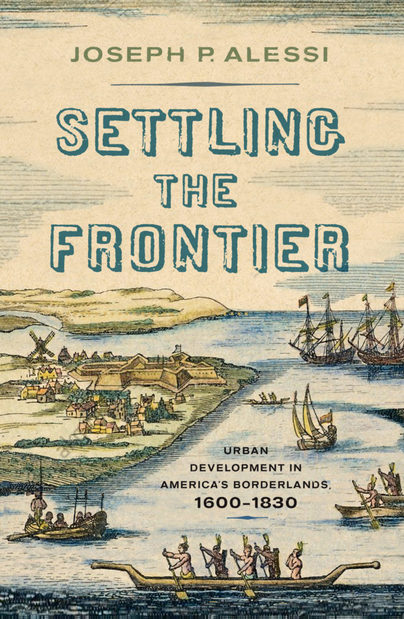 Add to Basket
Add to Wishlist
You'll be £25.00 closer to your next £10.00 credit when you purchase Settling the Frontier. What's this?
+£4.50 UK Delivery or free UK delivery if order is over £35
(click here for international delivery rates)

In 1811, while escorting members of John Jacob Astor’s Pacific Fur Company up the Columbia River, their Chinookan guide refused to advance beyond a particular point that marked a boundary between his people and another indigenous group. Long before European contact, Native Americans created and maintained recognized borders, anging from family hunting and fishing properties to larger tribal territories to vast river valley regions. Within the confines of these respective borders, the native population often established permanent settlements that acted as the venues for the major political, economic, and social activities that took place in virtually every part of precolonial North America. It was the location of these native settlements that played a major role in the establishment of the first European, and later, American frontier towns.

In Settling the Frontier: Urban Development in America’s Borderlands, 1600–1830, historian Joseph P. Alessi examines how the Pecos, Mohawk, Ohioan, and Chinook tribal communities aided Europeans and Americans in the founding of five of America’s earliest border towns—Santa Fe (New Mexico), Fort Amsterdam (New York City), Fort Orange (Albany, New York), Fort Pitt (Pittsburgh, Pennsylvania), and Fort Astoria (Portland, Oregon). Filling a void in scholarship about the role of Native American communities in the settlement of North America, Alessi reveals that, although often resistant to European and American progress or abused by it, Indians played an integral role in motivating and assisting Europeans with the establishment of frontier towns. In addition to the location of these towns, the native population was often crucial to the survival of the settlers in unfamiliar and unforgiving environments. As a result, these new towns became the logistical and economic vanguards for even greater development and exploitation of North America.