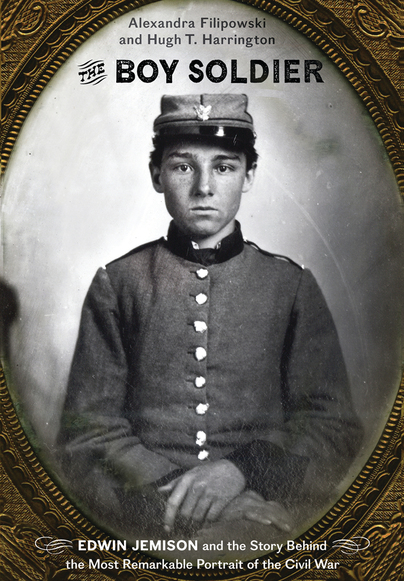 Add to Basket
Add to Wishlist
You'll be £19.99 closer to your next £10.00 credit when you purchase The Boy Soldier. What's this?
+£4.50 UK Delivery or free UK delivery if order is over £35
(click here for international delivery rates)

Since its first publication over fifty years ago, the haunting image of Private Edwin F. Jemison has attracted widespread attention from those interested in the Civil War and other wars. His likeness has been compared to that of the Mona Lisa, and it rivals Abraham Lincoln as being one of the Civil Wars most recognized photographs. And yet, his name is not widely known.

Some believe that there is something about the mouth that is special, or his hands. Others, perhaps the majority, find his eyes to be powerful and thought provoking. Some wonder if they are looking into the future: Eddies own future or the future of all soldiers. Is there a sense of fear or a resignation to fate? He is, foremost, strikingly boyish.

Despite the great interest in the photograph almost nothing has been known of the young man himself, and misinformation about him has circulated since he was properly identified twenty years ago. The authors have spent decades researching the story behind the photograph seeking primary sources for accurate details of Jemisons life. The result is The Boy Soldier: Edwin Jemison and the Story Behind the Most Remarkable Portrait of the Civil War, the only biography of this young Confederate soldier.

We first encounter Eddie as he attends school in Milledgeville, Georgia, and then moves to Louisiana in 1860. The following spring, just as Louisiana secedes from the Union, Eddie enlists in the Confederate army. A little over a week after enlistment, and with minimal training, he is sent to Virginia to face the greatest event this nation had seen.

Over 150 years later the intrigue around his photograph is matched by the very peculiar accounts of his death, as well as the controversy of his burial location. The authors examine both issues to complete the story of the young soldiers life and death.

HUGH T. HARRINGTON is an independent researcher and author whose books include Civil War Milledgeville.His articles have appeared in Journal of Military History, Georgia Historical Quarterly, Americas Civil War, Southern Campaigns of the American Revolution and others.