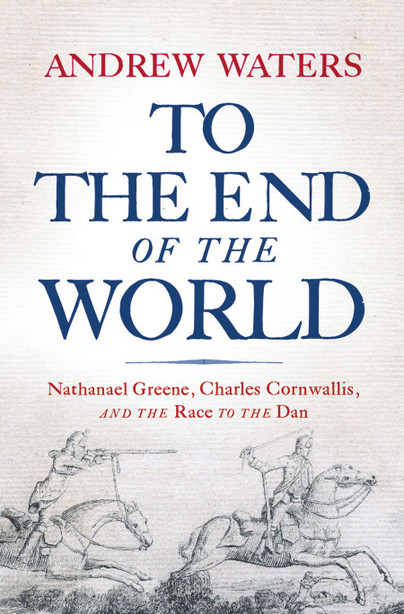 To the End of the World (Hardback)

Nathanael Greene, Charles Cornwallis, and the Race to the Dan

Add to Basket
Add to Wishlist
You'll be £25.00 closer to your next £10.00 credit when you purchase To the End of the World. What's this?
+£4.50 UK Delivery or free UK delivery if order is over £35
(click here for international delivery rates)

Order within the next 9 hours, 7 minutes to get your order processed the next working day!

“In the most barren inhospitable unhealthy part of North America, opposed by the most savage, inveterate perfidious cruel Enemy, with zeal and with Bayonets only, it was resolv’d to follow Green’s Army, to the end of the World.” So wrote British general Charles O’Hara about the epic confrontation between Nathanael Greene and Charles Cornwallis during the winter of 1780-81. Only Greene’s starving, threadbare Continentals stood between Cornwallis and control of the South—and a possible end to the American rebellion. Burning their baggage train so that they could travel more quickly, the British doggedly pursued Greene’s bedraggled soldiers, yet the rebels remained elusive. Daniel Morgan’s stunning victory at Cowpens over a superior British force set in motion the “Race to the Dan,” Greene’s month-long strategic retreat across the Carolinas. In constant rain and occasional snow, Greene’s soldiers— tracking the ground with their bloody feet—bound toward a secret stash of boats on the Dan River. Just before Cornwallis could close his trap, the Continentals crossed into Virginia and safety. Greene’s path featured three nearmiss river escapes, the little-known Battle of Cowan’s Ford, and a final chase so close that the fate of the American South—and the American effort—rested on one wrong British move. With a background section on the Southern theater in 1780, and a summary outlining the lives and careers of its important officers, To the End of the World: Nathanael Greene, Charles Cornwallis, and the Race to the Dan is a carefully documented and beautifully written account of this extraordinary chapter of American history. The book not only showcases the incredible dramatics of the American Revolution’s “Great Escape,” but also provides a compelling look at the psychological and intellectual distinctions between its two great generals, Greene and Cornwallis.