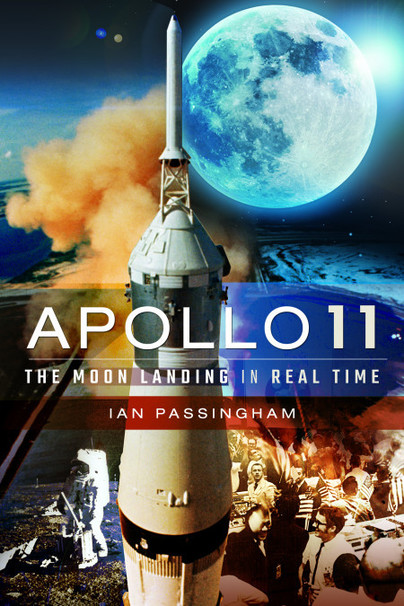 The Moon Landing in Real Time

As seen in The Sun, July 2019: 'Ahead of Moon Landing's 50th anniversary, fascinating facts you didn't know about the landmark space mission.'

Half a century has passed since arguably the greatest feat of the twentieth century: when Neil Armstrong became the first man to walk on the Moon. Apollo 11: The Moon Landing In Real Time brings the mission back to life as never before in a thrilling day-by-day account, exploring everything from the historic flight itself to how the $24billion space programme divided a nation.

Journey back in time and feel the excitement build in the days before launch and then experience the tension of the dramatic lunar landing and the relief of the crew’s safe return to Earth. This engaging account mixes easily understandable explanations of the ground-breaking technology behind Apollo 11 with entertainment, excitement and humour in equal measure. Set against a backdrop of the Cold War, race riots and Vietnam, the mission polarised opinion worldwide.

Alongside these issues, read long-forgotten tales including how a Chilean lawyer claimed he was the legal owner of the Moon, thousands of people signed up for proposed commercial Moon flights, Hilton revealed plans for a lunar hotel, ‘flat Earth’ believers claimed the mission was a hoax and some scientists feared the astronauts would bring back deadly germs from space which would devastate mankind.

This is the best book on NASA, the Apollo missions and the moon landing I have ever read, and I do not hesitate to recommend it to anyone with even a passing interest in America's early forays into space.

Featured in the Christmas Gift Guide

All About Space, issue 98

The History of Space Flight Quarterley

I would definitely recommend the book for anyone who has an interest in space, the moon landing or in understanding the culture and mindset of a country at the time of a breakthrough.

I enjoyed the book, which also contains many illustrations, all from NASA, and apart from making me feel as if I had been there, it also gave me plenty of food for thought. Many of the things people imagined didn’t come to pass, although it is not clear why (yes, it would have been very expensive, but that didn’t seem to stop them at that point. And why did the USSR pull back as well?), there were many advances due to it, but space exploration has remained controversial, perhaps even more so now than before. I wonder if there will be some positive event that will pull so many people together again in the future, rather than the catastrophes and disasters (natural or man-made) that seem to have become the norm in recent years. I guess only time will tell.

I cannot imagine there will be anybody who won’t find this book enjoyable (OK, people who believe the Earth is flat or conspiracy theorists might not care for it, and experts on the subject might not find anything new in its pages), and I’d recommend it to anybody who either remembers that event and wants to re-experience it, or wasn’t there at the time and wants to learn all about it. A joy of a book.

The book is a timely publication for the 20th July 2019, 50th anniversary of the first Apollo Moon landing. The 'Apollo 11 - Moon Landing in Real Time' book covers the whole story of the race to the moon, from 1957 when the Soviet Union launched their first satellite, to 1969 when on July 25th Buzz Aldrin, Neil Armstrong and Michael Collins returned to Earth, splashing down in the Pacific.
The day by day amounts give context to this historic mission, and it follows the excitement with the reports, news, anecdotes and some interesting and strange opinions that add an extra dimension with their thoughts expressed at the time drawing you in.
The scale of the endeavour, the tensions experienced and problem solving also draw the reader into the events, stirring the emotions once again for both those who had witnessed the events at the time and for younger readers who can now relive the thrilling events that dramatically changed the course of science, space exploration and our view of our planet, life and place in the universe.

A quite absorbing account of man's first steps on an alien world and the culmination of a programme which many consider to be humanity's greatest achievement... There are also humorous articles, including a request from the National Cheese Club of Australia to bring back a sample if it was discovered that the Moon truly was made of cheese, and the tongue-in-cheek consent to the mission given by a Chilean lawyer who, years earlier, had taken advantage of a legal principle whereby ownership of property could be claimed by anyone if it was not contested, and so became the owner of the Moon.

Written by Ian Passingham, this book follows a day-by-day telling of the entire Apollo mission, from before the launch to the splashdown. Passingham includes the historical background of 1969, including the Cold War and race riots. The use of humor, excitement, and easily understood explanations of complex technology help readers to understand the societal implications for the lunar landing.

Taking everything into consideration, ‘Apollo 11: The Moon landing in real time’ is best understood as a literary time capsule which places the reader at the heart of the national debate which confronted 1960’s America. This book commemorates an astonishing technological triumph underpinned by incredible bravery, whilst crucially giving a voice to the disaffected and the outright opponents of Apollo. Such an approach allows us to accurately reassess project Apollo on its 50th anniversary. As a result, this book should be considered required reading for all Apollo enthusiasts.

The celebrations for the fiftieth anniversary of the Apollo 11 Moon landing have been many and various. There have been a number of obscure programmes about the conspiracy theories, and compelling arguments which should appeal to all people, including the conspiracy theorists, that they have been peddling nonsense; luckily those programmes were buried among the graveyard of obscure TV channels that may get half a dozen viewers at most! This was one of the greatest of mankind's achievements, and it is celebrated quite magnificently in Ian Passingham's superb day-by-day account of what actually happened. A fitting tribute to the three men who represented us on this mission to the moon, and to the countless thousands of scientists, mathematicians and engineers who made it possible. If you only read one book about Apollo 11, make it this one. Quite remarkable.

If, like me, you can remember those exciting days in 1969 when nobody really knew whether the mission would be successful, you'll find this book fascinating.

A book that I recommend to everyone.

Passingham details the days leading up to the moon landing in a day-by-day account. The book also holds long-forgotten narratives of the time: doubting flat-earthers, terrified scientists and the proposed commercial moon flights.

This thrilling day-by-day account of the Apollo 11 mission explores everything from the historic flight itself, to how the $24bn space programme divided a nation. Also includes a wealth of stories, from the Chilean lawyer who claimed ownership of the moon to Hilton's plans for a 'lunar hotel'.

Ian Passingham has worked for the last 25 years as a national newspaper staff journalist after starting his career in the local press in Essex as a reporter, news editor and sports editor. His previous book, 66: The World Cup In Real Time, was published in 2016.