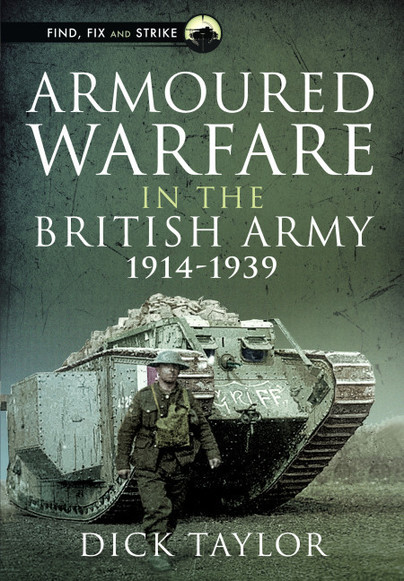 This is the first volume in a three-volume illustrated history of the evolution of armoured manoeuvre warfare in the British army, covering the period from 1914 until 1939. Author Dick Taylor’s tour de force covers the evolution of the tank and armoured cars in response to the specific conditions created by trench warfare, the history of the use of tanks during the war, as well as the critical period between the wars in which the tank was both refined and neglected. He also looks in detail at the amalgamations and mechanization of the horsed cavalry which led to the formation of the Royal Armoured Corps in 1939.

His detailed and absorbing narrative covers the social and human aspects of the story as well as the technology, and explains how the nation that invented and first fielded the tank in 1916 struggled to maintain the lead after the Armistice.

Dick Taylor started his service in the British army at the tender age of sixteen as a Junior Trooper at the Junior Leaders Regiment Royal Armoured Corps in Bovington. After completing training he served with 3RTR and 2RTR. As well as being a tank commander, he was a specialist in tank gunnery. He was commissioned as a captain in 2000 into 1RTRand left the regular army as a lieutenant colonel in 2013, although he has since been mobilized for operational service three times for tours overseas. During his long career he completed fifteen operational deployments to various hot spots including three tours of Afghanistan, two to Iraq, as well as Northern Ireland, Bosnia, Kosovo, Sierra Leone and South Sudan. He remains in the Army Reserve. He is the official historian of the Royal Armoured Corps, has an avid interest in modern and military history and writes military history books for a hobby.