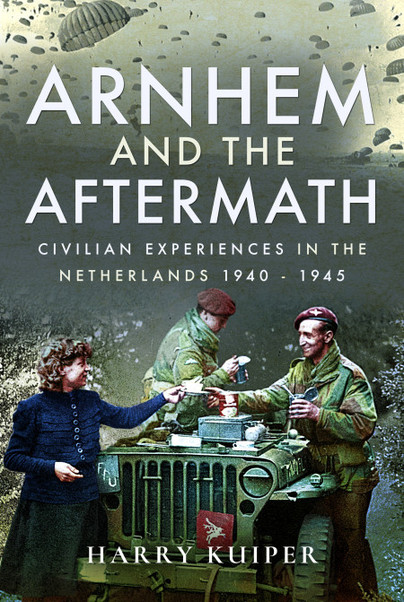 Arnhem and the Aftermath (Hardback)

Civilian Experiences in the Netherlands 1940-1945

Add to Basket
Add to Wishlist
You'll be £19.99 closer to your next £10.00 credit when you purchase Arnhem and the Aftermath. What's this?
+£4.50 UK Delivery or free UK delivery if order is over £35
(click here for international delivery rates)

War is far more than a series of military victories and defeats. Civilians are always the biggest victims and there are often staggering imbalances between casualties on the frontlines, and those behind; between the victims and the aggressors. Indeed, according to recent figures, the Second World War saw the deaths of an estimated 72 million people worldwide, two thirds of whom were civilians.

Wars also have serious social, economical and human consequences, and it is communities who often pay the price. In 1939, one European country after another suffered defeat, which later resulted in enormous social and economic degradations of the population involved. The failure of Operation Market Garden in 1944 resulted in yet another tragedy for the Dutch and one that would have far deeper social consequences than those before it. After the Allies were defeated, the Nazis terrorised the local Dutch populace and the V2 rockets fired that were fired from their Dutch launch sites resulted in over 9,000 casualties in the UK.

Arnhem and the Aftermath begins and ends in Arnhem, in 1940 and 1945 respectively. It focuses on the experiences of the civilians in those mournful years, against a backdrop of the airborne operations in the Netherlands, involving both German and Allied forces.

This book is harrowing at times, but is in my opinion, an essential read for those who study the Battle of Arnhem as it puts a new and welcome perspective on that iconic battle.

The book is a way of knowing another aspect of that battle that goes under the name of Battle of Arnhem and more generally "Operation Market Garden", stories of occupation and resilience that resemble so much to that experienced elsewhere by other populations, but for the Dutch that liberation, so dreamed of, caressed as so close in that September of 1944 was almost mocking because it happened practically at the end of the war. The experiences of Kuiper, his family and his neighbors are knowledge of an other side of the war, which is not only battles, victories and defeats but above all resilience, survival and a genuine desire to live.

These numbers - dreadful under any circumstances - are painful losses for a small country, and this book is a fitting tribute to that suffering.

An interesting and alternative view of the battle and its consequences.

This unique and fascinating book takes a look at the consequences of WW2 armed conflict following the Battle of Arnhem in 1940. Some of the figures and facts examined are mind-blowing, and Harry Kuiper does a sterling job in pulling it all together.

Amongst the great library which has been written about the Battle of Arnhem, this book manages the rare feat of examining an aspect which has scarcely been discussed by telling the story of Dutch population. Having become accustomed to peace following more than a century of neutrality, it shows how this came to a shocking end in 1940 when Germany invaded and Arnhem quickly fell. The book goes on to describe life in an occupied country and the many privations it brought, including the plight of the Jews and reprisals carried out in response to the activities of the Dutch Underground. In September 1944, it seemed that relief was at hand when the 1st Airborne Division dropped near Arnhem, but after nine days of heavy fighting the British were compelled to withdraw, leaving the residents in a devastated front line town. Forced to abandon their homes, the book shows how the civilians had to rely on the generosity of relatives or complete strangers for their welfare, and how their position became desperate during the hard winter of 1944, made worse by the German decision to deprive western Holland of all supplies.

The author has provided an engaging and sympathetic narrative, supported ably by many photographs, including rare and previously unpublished images. – Most Highly Recommended

For many of a certain age, Arnhem brings memories of the failed, airborne attempt to capture The Bridge, which would have brought WW11 to end in six months. To a younger generation, the name will b associated with that iconic film 'A bridge to far, when thousands of parachutes filled the sky in an ill-fated attempt to capture a bridge too far. The author, Harry Kuiper, was a young boy living in Arnhem at that time and tells the story of the German reaction to the battle, curfews and the harsh punishment when civilians where given 24 hours to evacuate the Arnhem. To seek shelter where the could. Their homes were looted or given to German families in the area.

A story that needed to be told and has relevance today wars.

This book gives the reader a different perspective of how war effects people in different ways. It is interesting to read that the porridge that Harry and his family were eating to stay alive was given to the pigs in a different part of his homeland. This book would make a good addition to any history or military book collection. I found this publication to be candid account of what it was like to live at a time of uncertainty and how even when there are those who are treating others with unimagined cruelty there are also those who will give help and shelter no matter what the cost may be.

Whilst the Market Garden battle in Arnhem is inevitably the focus of part of this book, it is rather more about the whole experience of the author and his extended family under German occupation. It is about the day to day curiosities and irritations with which Dutch people had to cope. Plenty of good accounts and insights from his family and friends who lived through it. A really good read.

Harry Kuiper was born in Arhnem in 1939 and experienced the Nazi Occupation of his county, first-hand. He is a retired journalist and author.