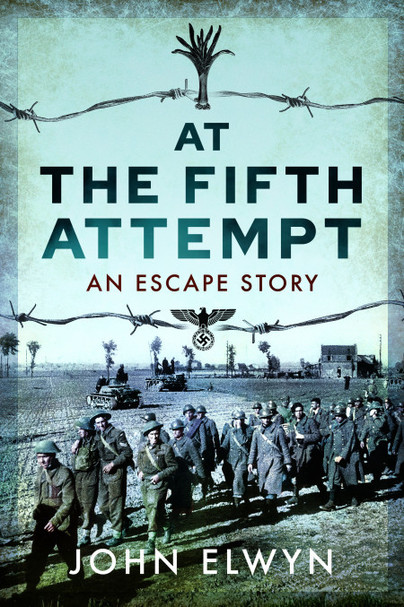 At the Fifth Attempt (Paperback)

Add to Basket
Add to Wishlist
You'll be £10.49 closer to your next £10.00 credit when you purchase At the Fifth Attempt. What's this?
+£4.50 UK Delivery or free UK delivery if order is over £35
(click here for international delivery rates)

The story told in this book is so remarkable that some may find it hard to believe that the author has not allowed the passage of years to embellish his memory of the events he describes. A little research, however, will soon dispel this idea.

As a private soldier serving with the Welsh Guards, Johm Elwyn was taken prisoner before the evacuation from Dunkirk. At once his mind turned to thoughts of escape and it was not long before he was on the run. The cycle of recapture, retribution and repeated escape which followed would have persuaded most prisoners that it was easier to sit out the war wherever one found oneself. But Elwyn was not cast in that mould and, not content with simply escaping, at one stage falls in love with and merries a Polish woman, a romance that sadly ended in tragedy.

But the way had to go on and Elwyn had to keep, or was kept, on the move, aided by some very remarkable and courageous people who could easily have paid with their lives for what they were doing – John Elwyn makes no secret of his deep admiration for the people of Poland.

Brought up on a hill-farm in Merioneth, N. Wales, John Elwyn left the local grammar school at 15 and worked on various farms until he was 19 when he joined the Welsh Guards on 1st August, 1939 – just in time for the Second World War.

Taken Prisoner during what he calls “the debacle of Dunkirk” he spent the next 3 years and 10 months in and our of prisoner-of-was camps in Upper Silesa, the Sudetenland of Poland. This period of his life is the subject of this book.

After his final and successful escape, for which he was awarded the Distinguished Conduct Medal, he was sent to an Officer Cadet Training Unit and eventually commissioned in the Green Howards. Being a fluent German speaker, he was attached to Intelligence and had the satisfaction of serving as a Field Security Officer in Germany rounding up former members of the SS and others whose past activities mertied further investigation.

After demobilization in 1946 he joined the Metropolitan Police, later transferring to the Caernarvonshire Constabulary, but in 1957 he rejoined the Army serving as an Intelligence Officer in Egypt, Germany and Cyprus. In 1951 he transferred to the Royal Air Force where he was again mostly employed on Intelligence duties in Germany. He finally retired from the R.A.F. in 1965 and after attending a year's course at Trinity College, Carmarthen, he became a teacher of modern languages – French, German and Russian. He also acquired a small farm here he bred pedigree Welsh Black cattle.

“At the Fifth Attempt” is not his first book – but his first book in English. He has published 17 books in Welsh – 2 original books and 15 translations from French, German and Polish. He was also translated a number of short stories from Russian.