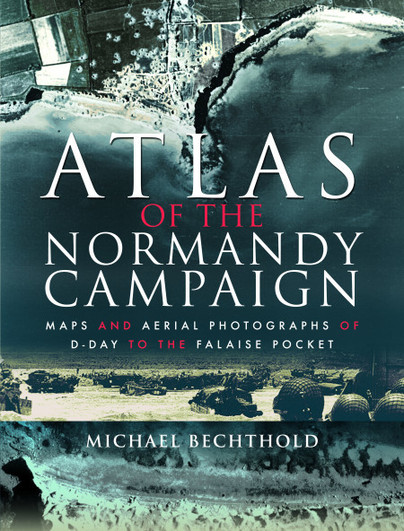 Atlas of the Normandy Campaign (Hardback)

Maps and Aerial Photographs of D-Day to The Falaise Pocket

Preorder
Add to Wishlist
You'll be £32.00 closer to your next £10.00 credit when you purchase Atlas of the Normandy Campaign. What's this?
+£4.50 UK Delivery or free UK delivery if order is over £35
(click here for international delivery rates)

Viewing the battlefield from the air dates back to the American Civil War when balloons allowed observation from above. The technique was refined and improved over the Western Front between 1914 and 1918 with the introduction of cameras but aerial reconnaissance really came into its own during the Second World War. Detailed and comprehensive aerial photography provided intelligence that was vital to the prosecution of the war. It eliminated some of the guess work from operational planning and facilitated accurate battle-damage assessments. This imagery was absolutely crucial during the war, and it remains a valuable resource to the historian today.

D-Day and the Battle of Normandy changed the course of the Second World War. The Allies planned long and hard for their return to France. Victory hastened the end of Hitler’s Third Reich, but just as surely, defeat would have prolonged the war immeasurably. What we know of those battles today comes from those who were there and the records they created. Snapshots and film provide glimpses of the past but the photographers’ view was limited and he was rarely at the point of the action. Time travel is a science fiction favourite but not possible in reality. We can, however, raise the curtain of time through the use of aerial photographs and maps. At their most basic, they show the topography and terrain at the time of a battle. As well, the imagery can be used to reconstruct a battle by showing enemy defences, tank tracks, and destroyed vehicles which can tell us a great deal. Under ideal condition, the interpretation of air photos with accompanying maps can provide stunning revelations which change our understanding of the past.

This book will expand our understanding of the Normandy campaign through a detailed study of dozens of contemporary aerial photographs and topographic maps used during the war as well as a large number of custom-drawn maps which are essential to understanding the battles under consideration. Some of the images in this book were taken prior to the fighting and will allow us to understand the challenges facing the Allies. Many of the images were taken during operations providing us a glimpse of combat as it transpired. Others were taken in the immediate aftermath of combat and allow us to piece together what has happened. The majority of the images have never been published. Each air photo and map is accompanied by a detailed description.

Mike Bechthold holds a PhD in History from the University of New South Wales, Canberra, Australia and an MA & Honours BA from Wilfrid Laurier University, Waterloo, Ontario, Canada. Mike is the author or editor of eight books and numerous articles. His most recent book is Flying to Victory: Raymond Collishaw and the Western Desert Campaign (University of Oklahoma Press, 2017). He is also the co-author of a series of guides to Canadian battlefields of the Second World and for 22 years was the managing editor of the quarterly journal Canadian Military History. He specializes in the fields of military air power (especially tactical air operations in the First and Second World Wars), the Canadian army in Normandy and Northwest Europe, and the Canadian Corps in the Great War. Mike is the Executive Director of the Juno Beach Centre Association.