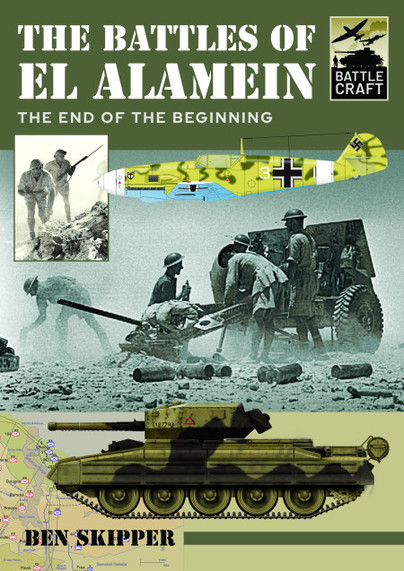 Add to Basket
Add to Wishlist
You'll be £16.99 closer to your next £10.00 credit when you purchase Battle Craft 1: The Battles of El Alamein. What's this?
+£4.50 UK Delivery or free UK delivery if order is over £40
(click here for international delivery rates)

"Aimed at the new or returning modeler, featuring easy to copy building, painting, weathering and detailing techniques to help bring a model to life."

I really like the layout of this book, as it is presented in an informative and logical manner. With both the modeller and those that want to read the title getting a good level of information provided. Text and images are of a good quality, and I commend Ben Skipper for tackling a complex subject in so few pages.

The Battle Craft series of books is aimed squarely at the Military Modeller, and this one does not disappoint. Pages 33 to 64 feature a selection of tanks and aircraft with crisp colour photographs and text that covers the relevant development and operational history, together with build notes for the featured model.

Kits covered include a Crusader, Panzer III ausf L, Bf 109 E-4/N tropisch, and Curtis P-40 Warhawk. An interest in any one of these subjects might justify purchase of the book.

The first section of the book is a concise summary of the battles around El Alamein, with useful source photographs. Some of these will be familiar to readers but some are new to this reviewer, providing context for diorama subjects. A handy summary order of battle down to divisional and independent brigade level is included on page 5. It also includes the air forces supporting the battles for both sides of the conflict.

Four stars for knowledge, interesting presentation and quality of publishing.

What a good start to this new series, and Ben has done a good job with picking out the content and providing a clear description of both the history and the modelling elements. Recommended, not just for the nice clear history of the battles, but for modellers as well.

This new series comes in an A4 Softcover design and looks at various battles of significance, the aim of this series is to combine a basic history of the particular battle and the machines and vehicles involved in that battle in a model format. What makes this different to other book series is that it features all the planes, tanks and vehicles involved rather than just the one type like in the Tank Series. Being a Pen & Sword Book you have a well-written history supported by great text and supporting photographs, but also you have great model photos of all the vehicles used in that battle. Although these books are still a great read and thoroughly recommended, especially for model makers of WWII.

A good introductory narrative of El Alamein that is well supported by images and maps. As ever in this series, the section for modellers is excellent.