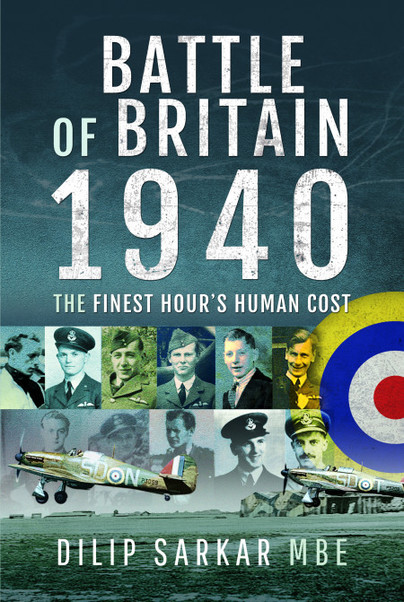 Add to Basket
Add to Wishlist
You'll be £30.00 closer to your next £10.00 credit when you purchase Battle of Britain 1940. What's this?
+£4.50 UK Delivery or free UK delivery if order is over £35
(click here for international delivery rates)


"Dilip Sarkar tells the story of this historic moment through the experiences of participants who did not survive the battle."

"Meticulously researched and affectingly written, Battle of Britain is a bittersweet memorial to the unheralded casualties of 1940 and their loved ones. At a time when key tropes and images of that momentous year are routinely hijacked, manipulated, and reduced to crass internet memes, Dilip Sarkar offers readers a sobering and timely reminder that "'inest hours' leave a trail of terrible human costs in their wake."

This book is thoroughly recommended to all, especially those with an interest in British history and the RAF.

There have been many books written on the Battle of Britain - Amazon alone suggests about 20 alternatives to this book– but I don't think there is another that concentrates on the lives and flying of lesser known heroes.

The author has been building a formidable and acclaimed portfolio of WWII aviation history and this volume addresses the human cost. The Battle of Britain halted the German expansion, but it did so much more, it defeated Germany because the German plan for World Domination depended on a very fast victory before British and American industry could out produce that of Germany. – Most Highly Recommended

This book is yet another from the prolific Dilip Sarkar. In it he tells the story of a varied group of individuals who were lost during the battle – aircrew, ground staff, sailors and civilians. While each of the eighteen chapters is devoted to a named person, there are countless others who weave through the stories.

There is little doubt that the immense amount of research carried out by the author over many years has armed him with an arsenal of histories to include in his work. His dedication to it is impressive. Books like this are not an overnight sensation; they take years of reading and delving in archives to create.

If you follow the author on social media you can see what it means to him to do this work. He delights in it. All power to him.

I have built up a small library of Battle of Britain themed books, the first of which was Peter Townsend’s classic Duel of Eagles that I bought in 1972. I’m not an obsessive by any means, but the history of the battle means a great deal to me. Books like this one from Dilip Sarkar keep that flame burning. I am sure that is his aim.

The people in his book were real; they were not one-dimensional avatars. Their stories are as vivid as they are tragic. I recall standing over the grave of an RAF pilot, Patrick Chaloner, Lindsay, buried in France. He was shot down over the English Channel and his body had washed up on a beach some time after his demise. People like him turn up in books like this. They gain substance and matter to us even more as a consequence.

This fine book is effectively a memorial to what the author describes as the human cost of the Finest Hour. Very highly recommended.

Hugely enjoyable, a good read, authoritative and coming from a new angle. What's not to like?

A brilliantly times look at the Battle of Britain as we experience the eightieth anniversary of one of the definitive battles of the second world war.