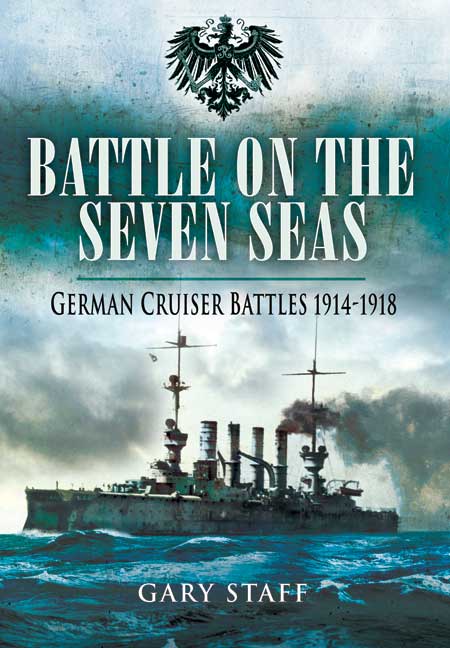 Click here for help on how to download our eBooks
Add to Basket
Add to Wishlist
You'll be £4.99 closer to your next £10.00 credit when you purchase Battle on the Seven Seas: German Cruiser Battles 1914 - 1918. What's this?
Need a currency converter? Check XE.com for live rates

The cruisers of the Imperial German Navy (Kaiserlische Marine) were active throughout the First World War and saw action all around the globe, tying up valuable Allied naval resources out of all proportion to their number. Drawing on first-hand accounts and original research in German archives, the author here describes in detail some of their most significant and/or audacious battles. Some are well known, such as their role at Jutland, Goeben's attack on the Russian fleet (which brought Turkey into the war) and the sagas of Konigsberg and Emden; but others have been unduly neglected. Gary Staff deliberately focuses on the latter to bring new material to the attention of the reader and to demonstrate the global span of the cruisers' activities. The blow-by-blow accounts of the action (drawing heavily on first-hand Allied and especially German accounts) are supported by dozens of photographs, many previously unpublished, from the author's own impressive collection.

I still found this an interesting read, and a useful book.

If you are looking for a simple narrative account covering an aspect of the German naval effort, you should consider Gary Staff's contribution. His use of German sources to drive the narrative is admirable and certainly acts as a useful pointer of “further reading” for anyone keen to delve in to the German side of the naval conflict. The book's key strength is the inclusion of these.

The strengths of this work are that it is underpinned by research from German archives while at the same time being a single volume compendium of these many and diverse actions. As such, this interesting and well-compiled book is worthy of a place on the bookshelf of all those interested in First World War naval actions.

Here we have a good read, a narrative of the German cruiser battles 1914-1918, with lots of quotes from the people who were there. Battle locations are world wide from the Pacific to the Black Sea with both global strategy and engagement tactics described. The account of the battle of Jutland, Skagerrak to the Germans, with its focus on the cruisers, is refreshingly different to the usual version of events. Also there are some excellent photographs of the warships including some uncommon ones showing battle damage...

This is an important study of German cruisers during WWI. Previous coverage has concentrated on a relatively small part of the actions by German cruisers. – Highly Recommended.

The author has painstakingly translated original research material from German archives in order to detail some of the most significant and audacious battles of the Great War.
This concise and well-written book will serve as a valuable library addition for anyone interested in the naval activities of the Great War.

The author has done a first-rate job of researching and recording the nine major battles in which Germany's cruisers fought. There were plenty of smaller battles and skirmishes too. All are well descibed from bi-lateral sources. The photographs are quite stirring. A very useful record.

It is the author's contention that the German version of events, upon which the majority of the book is based, has greater integrity and is unfettered with bias compared with equivalent British accounts. Unquestionably, the eye witness statements constitutes the most fascinating and absorbing parts of the narrative. The quotations chosen graphically portray the quite terrifying experience of being within the confines of a steel warship under sustained heavy fire. The author also succeeds in conveying the pride and dedication of the crew members as they continued to fight, usually against a superior enemy, often in the sure knowledge that their ship was doomed.

The blow-by-blow accounts of the action (including eyewitness testimony from Allied and German accounts) are supported by dozens of photographs, many previously unpublished, from the author's extensive collection. Gary Staff is an airline pilot by profession, but has had a life-long interest in naval history, and that of the Imperial Germany Navy in particular. He has spent many years painstakingly translating original sources into English and amassing a vast collection of period photographs. This subject is one that has gone practically unnoticed in details until the author's work. It will be welcomed by all historians interested in naval activities that took place during the First world War. The book has great reader interest and comes highly recommended.

This is a well written, well researched history, with a good central photographic section, which only narrowly missed being the editors choice this month.

Excellent.... The author breathes fresh life into it courtesy of vibrant German sources. As the author points out in his introduction, this is not an academic tome, but he has carried out extensive research and tapped many sources in the Bundesarchiv - the German counterpart to the National Archives/Imperial War Museum - to produce a book which should be on the shelf of anyone interested in World War 1 at sea.

A useful and fascinating volume for anyone interested in this particular period or in 20th century naval warfare in general, one that brings much new material to the fore.

Excellent...the author breathes fresh life into the oft-told story of Graf Spee's East Asia Squadron's flee from Tsingtao courtesy of vibrant German sources. The propaganda of the day always portrayed the Huns as an unemotional war machine; the accounts left by the German Matrosen (matelots) shows otherwise. Their accounts are as vivid as anything left by British sailors of the age.

As well as the famous clashes, Staff also features some lesser known battles...indeed, his panoramic sweep through German cruiser operations ends in the Aegean in January 1918 and the Battle of Imbros.

He has carried out extensive research and tapped many sources in the Bundesarchiv - the German counterpart to the National Archive/Imperial War Museum - to produce a book which should be on the shelf of anyone interested in World War I at sea.