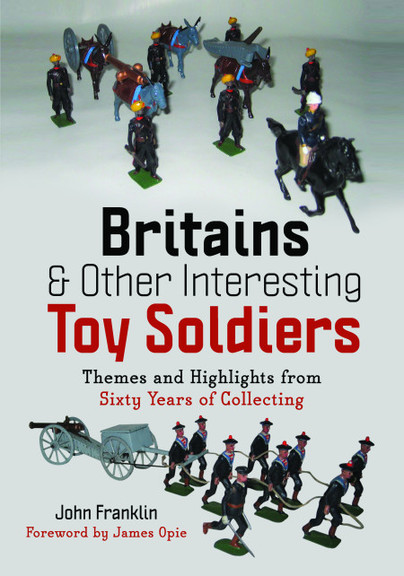 Themes and Highlights from Sixty Years of Collecting

Preorder
Add to Wishlist
You'll be £24.00 closer to your next £10.00 credit when you purchase Britains and Other Interesting Toy Soldiers. What's this?
+£4.50 UK Delivery or free UK delivery if order is over £35
(click here for international delivery rates)

John Franklin has been collecting traditional toy soldiers for over sixty years, mostly Britains but, as the title suggests, including other interesting additions. In this book he shares some of the in-depth knowledge gained through experience and countless hours of careful research, but most of all the passion and enthusiasm for his hobby. He explains how he was inspired to collect soldiers, like so many, in early boyhood and how a hobby grew into an obsession. The various chapters then examine themes he followed in his collecting, such as Britains Special Painting Orders and Indian Army Pipe Bands for example, or address questions regarding the manufacture or identity of specific sets that he has researched or, in some cases, is still seeking the answer to. It is packed with anecdotes, useful technical information and helpful advice for the collector but it is above all a proud tour of inspection of a sixty-year labour of love. Over four hundred photographs, show much of the author’s magnificent collection in a parade of miniature pomp and splendour.

John Franklin has been collecting Britains (and other) traditional toy soldiers for over sixty years and has a strong reputation as an expert upon them. He has written numerous articles for Old Toy Soldier magazine, several of which form the basis of chapters within this book. He was born in Hull but now lives in Surrey.