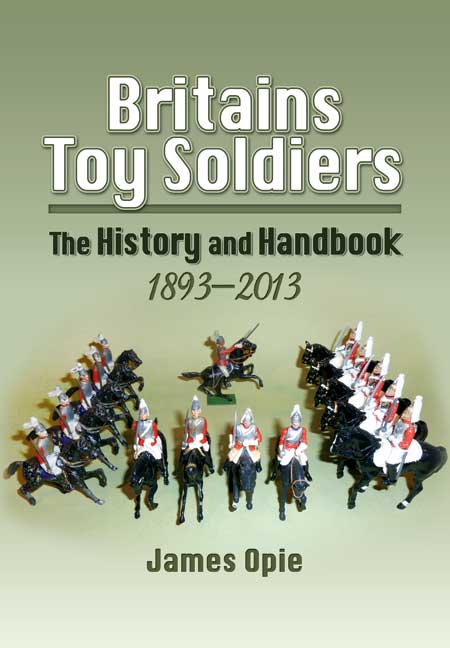 Add to Basket
Add to Wishlist
You'll be £35.00 closer to your next £10.00 credit when you purchase Britains Toy Soldiers. What's this?
+£4.50 UK Delivery or free UK delivery if order is over £40
(click here for international delivery rates)

This is the first full-colour history of the world-famous toy soldiers to chart the whole story of their development from Victorian table toy to 21st Century collectable. Prior to 1893 the family toy business of the Britain family was struggling as the toy industry was dominated by German manufacturers and importers. Then came the fateful decision first to import, then to design and manufacture, toy soldiers, an area the German firms were particularly strong in. Britains Toy Soldiers were born and soon their boxes stamped with the slogan 'Best Quality English Make' were being eagerly opened by little boys across Britain and then around the world. The rest, as they say is history and it is all captured here by James Opie, the world's leading expert on the subject, as he lovingly traces the varying fortunes of arguably the most famous British toy company. Illustrated with lavish colour photographs, many of them featuring items from the author's own collection, the book includes feature sections such as collectors' favourites and prices, high-value and famous sets, artistic highlights, quirks and mysteries. It is without doubt the most authoritative book on the subject and will be welcomed by the thousands of devoted collectors world wide as well as many more with fond memories of childhood battles with these beautiful toys.

I see this book as a coffee table/reference manual for the avid toy soldier collector. I found it excellent in its description and details... recommended.

I am not a collector of Brattain’s but had some well worn (damaged) examples tucked away just waiting for this book to help identify them. It is comprehensive and compelling reading but well organised so that it can go back on the shelf and be what it is; a refence book. Beautifully photographed images complement the text.